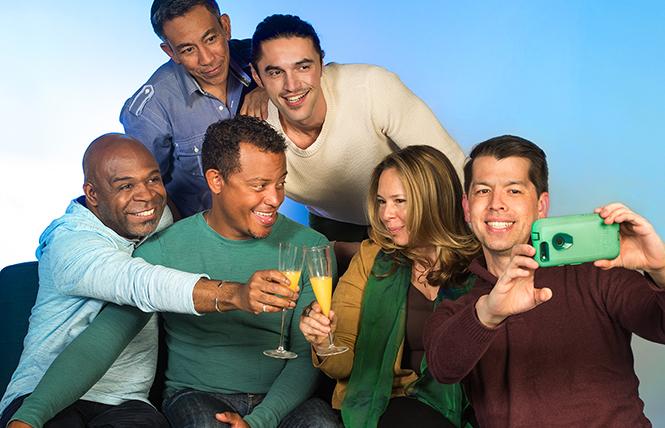 Stephen and Steven are feeling dated and undateable. Both as a pair and individually, the middle-aged couple at the center of "Steve," a "Will & Grace"-adjacent dramedy by Mark Gerrard now having its West Coast premiere at the New Conservatory Theatre Center, is wondering whether they're past their prime.

Between their no-longer-novel routines as a corporate lawyer and stay-at-home caregiver, their hellion of an eight-year-old son (unseen, but frequently at the center of conversation) and the inherent hard work of longterm coupledom, their sex life has waned, and each has begun to question his own attractiveness.

Fiftysomething Stephen (Joey Alvarado) has a pH that leans toward the basic: he's superficially even-keeled and problematically conflict-avoidant. Steven (Greg Ayers) is the more acidic of the pair, sharp-tempered and tart-tongued.

The show opens with Steven publicly lashing out when, over a dinner to celebrate his 47th birthday, he realizes that Stephen has been having raunchy IM exchanges (at the very least) with Brian (ShawnJ West), who happens to be sitting across the table with his own partner, one of Steven's oldest friends, Matt (Daniel Redmond). Also on hand is another old pal, Carrie (Clove Galilee), a lesbian blogger putting on a brave face — and stylish headscarf — as she battles cancer in the wake of a breakup.

In the midst of his meltdown, Steven catches the attention of Esteban, a sexy young Argentine waiter, played by an actor billed as Vaho, who is actually charismatic enough to pull off his mononym (whereas the show's titular proliferation of Steve-variants is annoying). As if enough Steves' balls weren't already in the air for a head-spinning sex farce, Brian and Matt soon form a throuple with their personal trainer, yes, Steve (like the kid, unseen, but more specifically described: "10 thick inches").

But a rollicking roundelay never materializes, let alone something deeper. You know almost everything you're going to find out about these characters from the first scene: Brian and Matt have a healthy relationship, and are comfortable with casual outside sex. The coupled Steves, temporary troubles aside, share an essential belief in monogamy and old-fashioned romance. Esteban is here as a plot device and symbol of simple, youthful idealism. And Carrie, despite a sensitively rounded performance by Galilee, is regrettably written as The Clear-Eyed Truth-Telling Female.

Director Becca Wolff moves the show's 90 minutes along at a breezy, joke-packed clip that seems to match the playwright's intent, even though it feels contradictory to the morose mood radiated by his central couple. Steven and Stephen are written as incapable of having a substantive discussion or even a juicy existential quarrel despite 16 years together. Steven's stubborn non-attempt at rapprochement is a barrage of "Fuck you" texts. Gerrard's dialogue is full of snappy Broadway lyric quotes, many from Sondheim (yes, another Steve). But pointing to the work of one of theater's most nuanced anatomists of human relationships isn't the same as effectively emulating him. "Steve" delivers a lot of wisecracks, but little in the way of wisdom.

Oddly, in a show about feeling dated, it's not the classic Sondheim or Rodgers and Hammerstein snippets that stick out most uncomfortably here, but some of the more recent references. Punchlines about Jennifer Lawrence, "Malcolm in the Middle" and Kristin Chenoweth get their intended chuckles, but they point to the vein of sitcom flimsiness that runs through a play that in other ways aspires to depth.

One final note about cleverness trumping content: NCTC should strongly consider changing the recorded music that opens the show. While "I Want You Back" may once have been a jaunty signifier of heartbreak and hoped-for reconciliation, thoughts of Michael Jackson set this comedy of sex and romance off to a terribly awkward start.