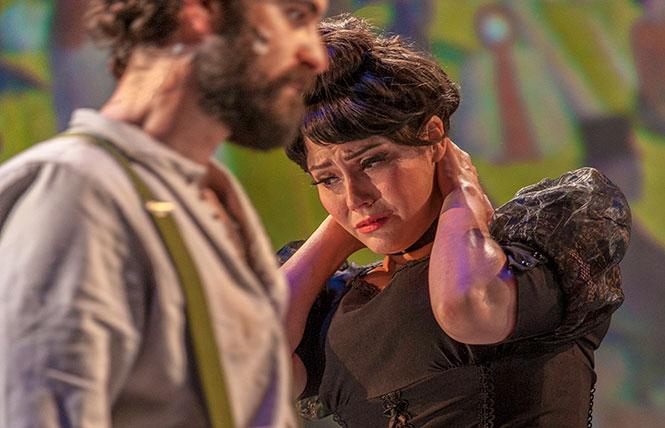 George (John Bambery) and his lover Dot (Nanci Zoppi) discuss their future in "Sunday in the Park with George" at San Francisco Playhouse. Photo: Ken Levin

My favorite moment in "Sunday in the Park with George" is when the titular artist, George Seurat, describes the inventiveness of the pointillist brushwork in "A Sunday Afternoon on the Island of Grand Jatte." The painting of this 1886 masterpiece provides the plot for the musical's first act.

"What is the dominant color?" Seurat asks his colleague, Jules.

But Seurat, played with tightly wired energy by John Bambery in the thrilling San Francisco Playhouse production running through Sept. 8, urges him to examine the canvas more closely. In fact there is no purple paint to be found. Seurat explains that by placing two distinct points of pigment - one red and one blue - alongside each other, the reflected light rays interact such that violet is created in the eye of the beholder.

Before this conversation, the audience has been privileged to observe its underpainting: composer-lyricist Stephen Sondheim's evocation of Seurat's strained relationship with his model and paramour, Dot (Nanci Zoppi - funny, tender, and almost eerily reminiscent of Bernadette Peters, who originated the role). George and Dot struggle with the tension between identifying as strong, separate individuals and the elusive, combinatorial allure of coupledom.

And so, when Seurat discusses the creation of violet, it's a glorious, dizzying moment. The facts of physics and the metaphors of psychology vibrate in tandem on stage, just as red and blue do on canvas, as art and science do in the minds of the audience. We are all together, in a perpetual wrestling match of complement versus counterpoint.

The potent ideas that Sondheim and book writer James Lapine are considering here find their way into every aspect of the show. Director and scenic designer Bill English, lighting designer Michael Oesch and costume designer Abra Berman collaborate on a series of visual vignettes that focus on tight details of "A Sunday Afternoon..." before zooming outward, from micro to macro, as unruly bits and pieces merge into a harmonious whole.

As beautifully rendered by Dave Dobrusky's supple eight-piece orchestra, Sondheim's prickly, repetitive piano-flecked motifs feel urgent (and sometimes annoying) until, in a masterpiece of sonic pointillism, they all come together to form the rich harmonies of "Finishing the Hat" and "Sunday," the glorious first-act finale.

The significantly shorter and slightly less resonant second act leaps from the 19th century to the 21st, with the putative daughter and great grandson of Seurat, also played by Zoppi and Bambery, wrestling with the artistic legacy of family and the commerce of contemporary art.

NextGen George politics and schmoozes his way through a museum show full of fawning funders, daunting critics, and contemptuous rivals. His works, called Chromolumes, cleverly rendered here by projection designer Theodore J.H. Hulsker, are computerized film and laser-light collages that de- and re-construct the original Seurat's works. Made in collaboration with a composer and an ex-NASA tech engineer, his pieces are at once inventive and derivative.

This George's fond but mixed feelings about his work reflect a tinge of self-critical ambiguity in Sondheim and Lapine's opinion of their own Act II efforts. But if some elements here feel a bit less elegant - and in the case of Berman's 1980s-chic costumes, magnificently, hysterically dated - there are others that underscore the genius of "Sunday"'s overarching concerns.

In a show that plays with the physics of light and sound, transposing acts across time is a brilliant gambit. And the movement from George Seurat's science-based experiments in color to his scion's application of computer technology to artmaking is a keen conceit.

"Sunday in the Park" has always been a polarizing work for audiences. Its fragmented harmonies, devilishly complex turns of lyrical phrase - "Draw your own conclusion/All you artists do/I see what is true," "If you can know where you're going, you're gone/Just move on" - and recursive ideation in lieu of linear plot make it too much work for many a casual theatergoer. It's the ne plus Sondheim, and it's never going to win over anyone who goes in with a sense of resistance. As was Seurat's intent with his paintings, the show invites engagement, not escapism.

Requiring a painstaking integration of technical skill and artistry, performance and design, "Sunday in the Park" is so precisely crafted on paper that almost any flaw in production will prove a kill defect. It's a pass-fail proposition, and minor critical quibbles are beside the point. In taking on this seminal work of 20th-century music theater, San Francisco Playhouse demonstrates a vaulting ambition and clears an extraordinarily high bar.

"Sunday in the Park with George," through Sept. 8, San Francisco Playhouse. www.sfplayhouse.org