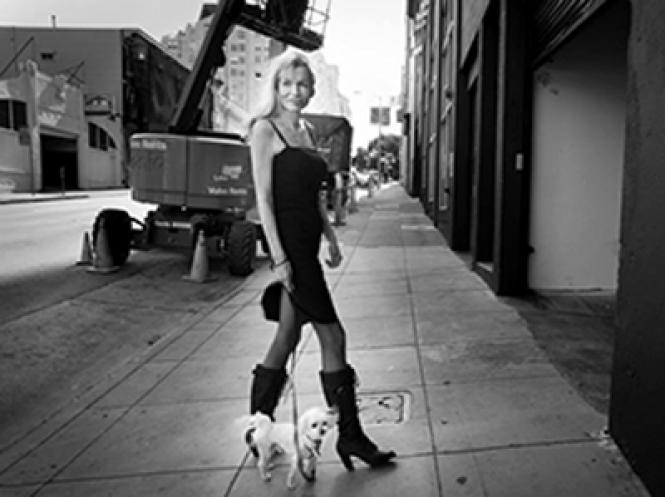 In 1989 she wrote "The Golden Age of Hustlers," a haunting piano ballad that recalls the long-ago days when Polk Street was still a gay enclave, a seedy haven where pretty young hustlers plied their trade. Many of the boys shared burgers at The Grubstake, one of the last remaining venues of that era still in business. The song serves as a sad reminder of a San Francisco which no longer exists.

"I saw the best bodies of my generation sold, bartered, and destroyed by drugs and prostitution," Lake wrote, as she recalls the pretty young men who sold their bodies and the "dumb men" who paid their rent.

"It's a very layered song," Lake said, in a phone interview with the Bay Area Reporter, as she prepares for her October 15 show at Oasis. "It's cautionary, it's confessional; it's a love song to a boyfriend I had. It's the tragedy of hustlers, and the glamour. It covers a lot of ground."

Lake, who gained a reputation for performances that could be wild or wistful, eventually recorded an album in 2005, Broadway Hostess. The 1996 small press memoir, The Unsinkable Bambi Lake (co-written with author and Dog Eared Books' Castro store manager Alvin Orloff) proved her remarkable storytelling skills.

Lake noted that New York-based singer/performance artist Justin Vivian Bond, who came to fame in San Francisco, performs "The Golden Age of Hustlers" at nearly every one of Mx's shows. Bond has sung the song all over the world.

Silas Howard, the former Tribe 8 guitarist-turned documentary filmmaker, made the short film Sticks & Stones: Bambi Lake in 2014. The film includes archival footage of a few of Lake's nightclub shows, and an honest depiction of her struggles with addiction, homelessness and survival through the AIDS pandemic that killed most of her friends, and thousands in the San Francisco queer community.

Over the decades, Lake developed a reputation as a seasoned performer in her own right, in between dark times of homelessness and addiction. She was performing in cabarets even during her time as a sex worker. Her new show, she says, will be a look back upon that era.

"All through this little show there is a direct line all the way back to The Cockettes," she said.

There will be other Cockettes connections throughout the evening.

Lake's opening act will be veteran composer Scrumbly Koldwyn, who was the Cockettes' piano man. Koldwyn will be performing his new piece, "Cirque du Scrumbello," a gender-bending retro cabaret featuring members of Thrillpeddlers.

That ensemble, acclaimed for Grand Guignol vaudeville-style shows, and extended runs of Cockettes show revivals, was ousted from their longtime stage at The Hypnodrome in February 2017.

When Lake takes to the Oasis stage, she'll be accompanied by her long-time pianist and pal Birdie Bob Watt. She said that her audience can expect to hear "obscure songs from the 1930s."

"This is all music which goes back to The Cockettes," she said, recalling her late friend John Rothernel. "John lived with Sylvester. He was very grand and did amazing things. He didn't worry about sounding like a woman; he just belted it out. He and Peter Minton would get together and do solo shows. I started collecting the music after John died."

Lake added that Rothernel inspired the stage persona she adopted for herself.

"Connie Champagne does Judy Garland," she said. "Veronica Klaus does Peggy Lee. I do John Rothernel."

Lake hopes that her audience will join her on a journey into San Francisco's past, whether they recall the old days, or are curious to see a bit of living queer theatre history.