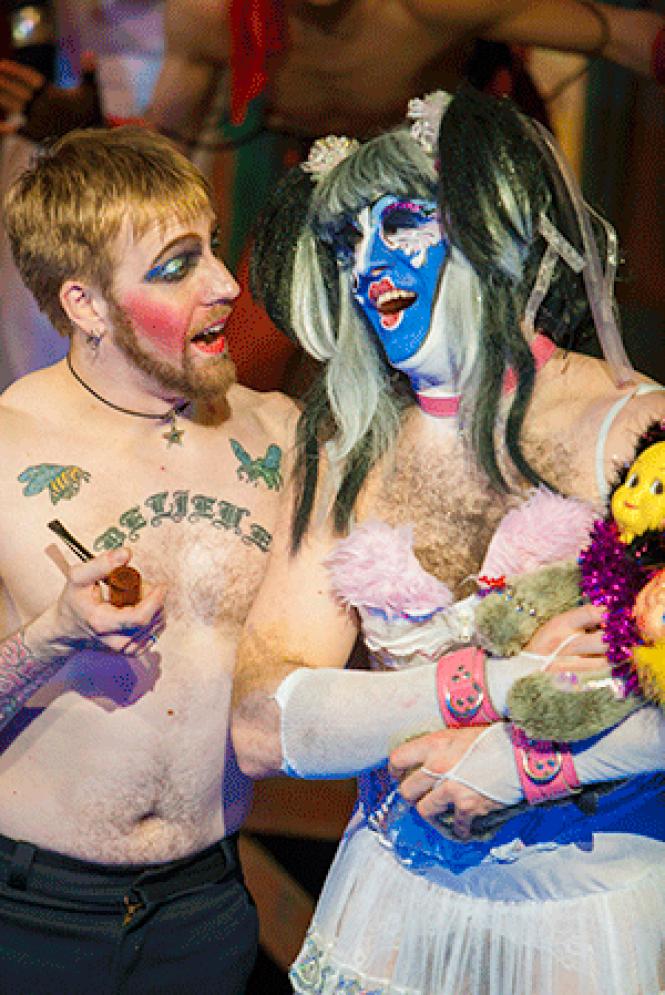 Looking back on my review from five years ago of Thrillpeddlers' first production of Pearls Over Shanghai, what now seems astonishing is the astonishment expressed at the inventiveness of the material, the elaborateness of the production, and the discipline that the large cast brought to a sprawling story.

So, heading back to the Hypnodrome for Thrillpeddlers' fifth-anniversary production of Pearls Over Shanghai, the only element missing from the earlier experience is the surprise factor. But this is not just a carbon copy. Many roles have been recast, the fabulous costumes and wigs have been reworked, and the musical score has been tweaked. And, if memory serves, this new production is considerably more polished than what came before.

With music by Scrumbly Koldewyn and book and lyrics by Link Martin (augmented by Koldewyn and Pam Trent), Pearls Over Shanghai draws on many stylistic sources: comic operetta, early Warner Brothers musicals, burlesque, classic Broadway, and all-around smut. There are so many plotlines and characters â€" probably to accommodate the various talents of the original cast of the Cockettes â€" that it's best not to invest much effort at keeping it all sorted. It's a go-with-the-flow kind of show.

But at the woozy center, it's the story of three singing sisters (Zelda Koznofski, Jesse Cortez, and the wonderfully world-weary Birdie-Bob Watt) who head to Shanghai in hopes of being discovered, only to be sold into white slavery while their would-be rescuer, an American ship captain (an inked, pierced, and stalwart Steven Satyricon) falls into forbidden love with a poor Chinese maiden of ambiguous innocence (the hilarious Eric Tyson Wertz). There seem to be several levels of grand poo-bahs (including original Cockettes member Rumi Missabu, whose elastic facial expressions remind me of latter-day Lucille Ball) and their henchmen (memorably played by Earl Alfred Paus and John Flaw) who orchestrate the kidnapping, and one or two subplots that have nothing to do with any of this.

Thrillpeddlers' Grand Poo-bah Russell Blackwood is again the director who expertly and imaginatively marshals the 20-member cast, and returns in full force to the role of the imperious Mother Fu. Choreographers Noah Haydon and Bonni Suval have a field day with their quotes from old musicals, and make ample use of the props that Yusuke Soi has corralled. This is a good place to acknowledge the creators of the hallucinogenically dazzling costumes: Tina Sogliuzzo, Dwight Overton, Flynn DeMarco (wigs, too), Tahara, and Bill Bowers, and the ornate sets of James Blackwood.

Koldewyn, another of the original Cockettes, is still at the piano playing the panoply of his many melodies. Where the production can slow down is when the lyrics don't do enough twisting and turning for the overall satirical tone, and in some cases, when the voices are just not strong enough.

But Pearls Over Shanghai still marks another happy reunion of the Cockettes and Thrillpeddlers, two theatrical groups separated by 40 years that still seem to have been destined to be collaborators in sinfully silly glory.