Covering all the bases 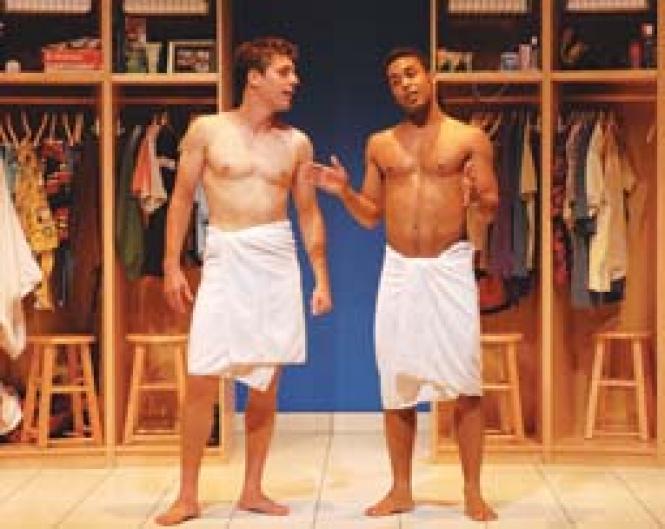 Tim Redmond and Brian J. Patterson in Take Me Out.
Photo: Lois Tema

Baseball may be the most relaxed of any professional team sport. Half the time, most of one team is sitting on a bench while the other team mostly stands around in a field. It gives you time to think, which, as we all know, can be a very dangerous thing.

In Richard Greenberg's Take Me Out, now at New Conservatory Theatre Center, these dangers are realized in ways that are emotionally, personally, and even physically destructive. It's a gripping tale, even when it seems to be swinging at any pitch that comes along, and director Ed Decker's stylish production realizes most of the play's potential.

Take Me Out opened on Broadway in 2003, and while events often overtake theatrical efforts to explore them, the commotion stirred whenever a professional athlete comes out as gay has not abated. And the fact is, most of these announcements occur after the athlete in question has retired from the sport. In this way, Greenberg's Tony Award-winning play is still ahead of history as it depicts the complex reactions to the coming-out announcement by one of baseball's most beloved players.

Fans, friends, and teammates react with varying degrees of disappointment, betrayal, anger, disgust, and don't-drop-the-soap nervousness. The newly out Darren Lemming doesn't even have to be in the communal shower to make the other players uncomfortable in their nakedness. It's a loss of heterosexual innocence that they lament.

Take Me Out could have taken a simple movie-of-the-week approach to a tale of bravery in the face of prejudice Ã¢â‚¬â€ and a bigoted redneck relief pitcher provides an easy villain Ã¢â‚¬â€ but Greenberg digs deeper. Lemming, the star centerfielder for the fictional Empires, is hardly a straightforward hero. In fact, he is so lost in his own celebrity that he assumes that his actions will be without ramifications. "Short of God," he says, "nobody can get me."

As Lemming, Brian J. Patterson easily projects a cocky self-confidence and then shows us the fissures as that confidence is chipped away by his own actions. Matt Socha provides a wonderfully grounding presence as Lemming's best friend on the team, and as the narrator who tries to make sense of the Empires' triumphant but horrific season.

Jeffrey Cohlman, last seen at NCTC as the boyishly naive title character in The Fabulous Adventures of Captain Queer, is unrecognizable yet highly believable as the semi-literate thug who misguidedly talks his trash to the press. On the other end of the spectrum, Patrick Michael Dukeman plays Lemming's adoring business manager as a screaming queen, sometimes taking the comic-relief character beyond the necessary nelly excesses, but nonetheless scoring with his elaboration on the cosmic meaning of baseball. As Lemming's role-model friend from an opposing team, Myers Clark brings an effective gravitas to the smaller but crucial role.

While Bruce Walters' locker-room set forgoes the running water in the shower scenes, it is still a handsome design. In fact, Take Me Out is a handsome production in all regards. In its season finale, New Conservatory has a hit a homerun.