The Lavender Tube on heroes and sheroes 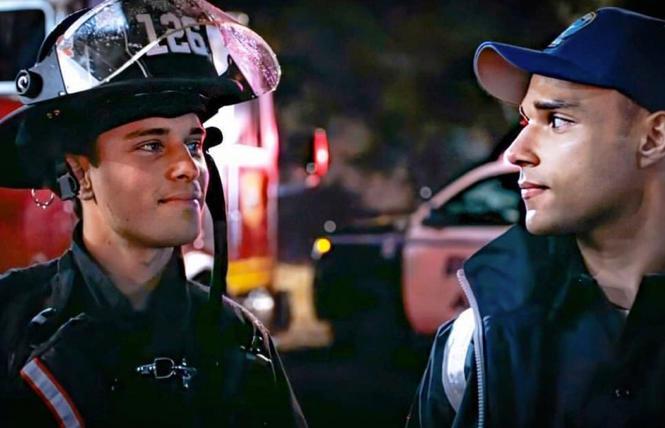 Ronen Rubenstein and Rafael L. Silva in season 3 of '9-1-1 Lonestar'

Starting the New Year with a bazillion reminders that we came this close to losing democracy on January 6, 2021 was not the most auspicious beginning to 2022, but it's what we got. We recommend watching CNN's Live from the Capitol: January 6th, One Year Later and HBO's Four Hours at the Capitol. As philosopher George Santayana famously said, "Those who cannot remember history are condemned to repeat it."

The memorial to January 6 saw all the Democrats in attendance and only two Republicans: Rep. Liz Cheney (R-WY) and her father, former Vice President Dick Cheney. When the Cheneys are the moral center of your party, it's time to burn it to the ground, sow the ground with salt and rethink rebuilding.

9-1-1 Lonestar
Who doesn't need hot gay men saving lives in the midst of a pandemic? The third season of 9-1-1 Lonestar began January 3 and it's still sizzling.

In the series, paramedic and former firefighter T.K. Strand (played by openly bisexual actor Ronen Rubenstein) and his police officer boyfriend Carlos Reyes (played by openly gay actor Rafael L. Silva) are one of the most powerful and hot gay couples on prime time.

9-1-1- Lonestar is set in Texas and was created for Fox by Ryan Murphy, Brad Falchuk, and Tim Minear. The series is a spin-off of the 9-1-1 series, which also has significant queer content.

"It's super hot and it just goes on. It just doesn't stop. We're, like, crashing against the walls, and then we end up on the couch. I warned my parents and my friends for months. I said, 'Listen, I understand if you guys don't want to watch it, I understand you probably might say some really ignorant, close-minded stuff or you just might not want to watch it and I get that too.'"

Rubenstein came out in real life last year, propelled by the T.K. and Carlos storyline. He said, "The biggest thing for me is where I come from, it's like people like me and people who have identified as bisexual or gay or as any part of the community, you're just not welcomed. It's as brutally honest as that."

He added, "It's either you faced insane amounts of profanity, like the F-word was thrown around all the time or you would get your ass kicked if you were gay. So there was definitely a fear of sort of embracing how I felt. I was definitely more aware of it in high school. I was aware of my feelings and how I started looking at men, but I couldn't talk to anybody about it."

Rubenstein hopes his real-life reveal and on-screen relationship will help young (and not-so-young) queer people to embrace their authentic selves. 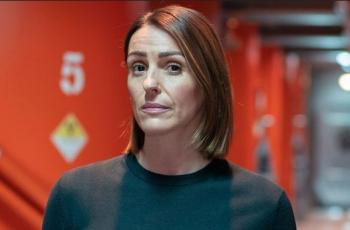 Vigil
The taut new British thriller Vigil has us hooked. Not for the claustrophobic, this political suspense series from BBC begins with a harrowing attack at sea, followed by a suspicious death in a nuclear submarine. The eponymous HMS Vigil is a nuclear-powered Vanguard-class ballistic missile submarine that hides in the depths of the waters off the U.K.

The opening ten minutes of the first episode will have you on the edge of your seat, screaming at the screen as the events transpire. It just gets more intense from there.

The series stars the fabulous Suranne Jones, who has been the lead lesbian in Gentleman Jack, as Anne Lister, for two seasons. In Vigil, Jones plays Detective Chief Inspector Amy Silva of the Scottish Police Service. She has a very complicated back story and is in a lesbian relationship with a co-worker, Detective Sergeant Kirsten Longacre (played by Rose Leslie, of Game of Thrones and The Good Fight). The scenes between the two women are fraught and full of longing. They also present complexities in the workplace.

Both women are ace detectives, which is a problem for the Royal Navy and MI5 as the story evolves. No spoilers, but this is a multi-layered and multi-faceted story that tells a series of tales. There is a political storyline, the relationship between Amy and Kirsten, the fight against nuclear warheads and, since this is a Scottish/British series, class struggle. Additionally, since Silva is up against the male military establishment and the male police establishment, misogyny awaits at every turn.

This is a visually beautiful series with keen direction by James Strong and Isabelle Sieb. Strong was BAFTA-nominated for Broadchurch and Sieb for Shetland, two stellar thriller series. There are many nail-biting moments and a lot of startling ones.

Among the cast is Shaun Evans, who we love in the Endeavor series, who plays the pivotal role of Warrant Officer Class One Elliot Glover, the Vigil's coxswain; on Peacock.

Women of the Movement
Mothers of the Movement is a group of women whose African American children have been killed by police officers or by gun violence. ABC's Women of the Movement borrows from that moniker which chronicles Mamie Till-Mobley's quest for justice following the brutal lynching of her son, Emmett Till, who was just 14 when he was murdered.

The story of murdered Black men and boys is one all-too-familiar to Americans. In a scene that takes place in a funeral home, Till-Mobley views her son's mutilated body for the first time. The boy was kidnapped, tortured and lynched after being accused of whistling at a white woman in a grocery store.

As happened in real life, she leaves her son and instructs a Jet magazine photographer and reporter to detail "what [Emmett's killers] did to my boy." 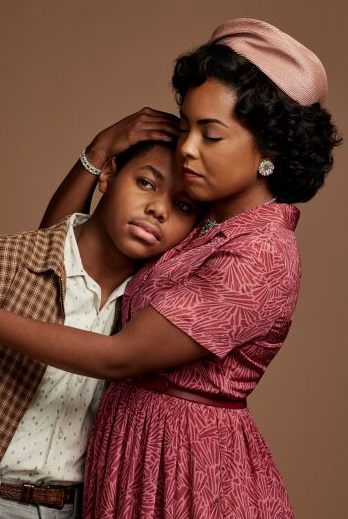 "We wanted to make it as realistic as we could, following in line with broadcast standards and practices," creator and executive producer Marissa Jo Cerar told the Los Angeles Times|. "We have to see what Mamie saw."

The Department of Justice declined to pursue charges in the case last month, closing the case for good.

In 2020, Sen. Rand Paul (R-KY) stopped the Senate from voting on the Emmett Till Anti-Lynching Act, saying it was too broad and Black people would make any excuse to use it.

Created and written by Marissa Jo Cerar and directed by Gina Prince-Bythewood, Women of the Movement stars Adrienne Warren as Mamie Till-Mobley, Cedric Joe as Emmett and Tonya Pinkins as Alma Carthan, Emmett's grandmother; on ABC.

Wheel of Time
Amazon Prime's epic fantasy series The Wheel of Time "follows Moiraine, a member of the Aes Sedai, a powerful organization of women who can channel the One Power. With her Warder, Lan, she seeks a group of five young villagers from the secluded Two Rivers, believing one of them is the reincarnation of the Dragon, an extremely powerful channeler who broke the world. The Dragon Reborn is prophesied to either save the world from a primordial evil known as the Dark One, or break it once more."

Openly gay showrunner Rafe Judkins has created the series based on Robert Jordan's novel series of the same name. Judkins is also working on showrunning and writing The Last Amazons alongside director/executive producer Ava DuVernay, a television show about the real Amazon women in ancient Greece.

Season one of The Wheel of Time ended December 24 and season two is in production. The Wheel of Time is hot and quite queer and you'll want to check it out. Starring Emmy-winner Rosamund Pike as Moiraine, Daniel Henney as al'Lan Mandragoran, Zoë Robins as Nynaeve al'Meara, Madeleine Madden as Egwene al'Vere, Josha Stradowski as Rand al'Thor and Marcus Rutherford as Perrin Aybara; on Amazon Prime. 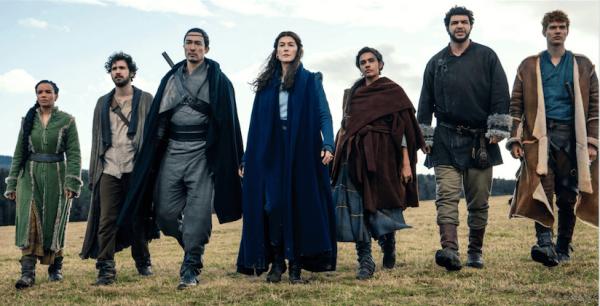 The main cast of 'The Wheel of Time'

"I'm proud of 'The Gay Agenda,'" Savoy told Variety. "It's joyful, it's inquisitive, it's welcoming. I think it's a real reflection of the LGBTQ+ community and I hope our listeners feel the same. Interviewing guests this season made me a better person. Hearing people's unique stories and perspectives on life and happiness was a learning experience and I don't take that for granted."

The Gay Agenda will be produced by Most, which is Netflix's banner for its LGBTQ storytelling. Gabrielle Korn, Netflix editorial and publishing manager for Most, told Variety, "I love this podcast so much; it's truly a joy to listen to, and I hope it brings that same joy to our followers."

Brown interviews LGBTQ trailblazers in the community with Yellowjackets co-star Liv Hewson, who is nonbinary. This is a feel-good series, so if you need an uplift with lots of humor, check it out.

Global
Finally, Michaela Jaé Rodriguez broke our hearts as Blanca in Pose. Now she's made history at the Golden Globes as the first trans actress to win for Best Actress in a TV Drama.

Rodriguez said, "This is for the LGBTQAI, Black, Latina, Asian [communities], the many multi beautiful colors of the rainbow... This is not just for me, this is for y'all. This is the door that opens for y'all."

So, for the gay (and LBTQ+) agenda and so much more, you know you really must stay tuned.

Preludes to a kiss: The Lavender Tube on news, and momentous smooches
Sign up!