Sharon Gless: 'Queer as Folk' and 'Cagney & Lacy' star on her new memoir 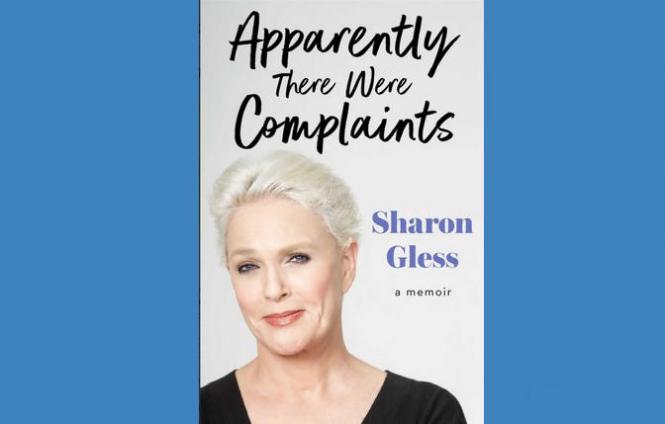 Have you ever read a memoir that is so intimate, so revealing, so honest, that you as you were turning the pages it felt like the writer was sitting next to you, speaking directly to you? Kudos to multiple Emmy Award-winning actress Sharon Gless for making that a part of the experience of reading her new memoir Apparently There Were Complaints (Simon & Schuster, 2021).

The Los Angeles native with Hollywood in her veins (her maternal grandfather was a hotshot entertainment lawyer), Gless rose to prominence via her portrayal of New York police detective Christine Cagney in the popular and groundbreaking 1980s TV series Cagney & Lacey (alongside Tyne Daly).

As if she hadn't already established an LGBTQ following through that show, she went on to play Debbie Novotny, the smart and sassy mother of Michael on Showtime's equally groundbreaking Queer As Folk in the early 2000s.

Gregg Shapiro: Your new memoir, Apparently There Were Complaints opens on a serious note with your 2015 pancreatitis diagnosis. I hope you are in good health.
Sharon Gless: Thank you, honey, I'm in very good health. 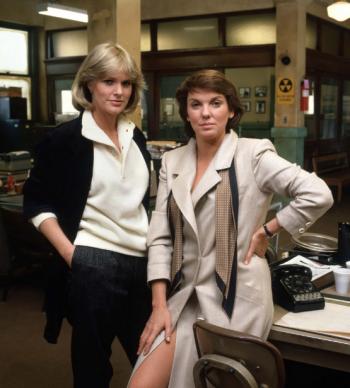 Why was now the time to write your memoir?
Well, it's taken seven years. It's not like it was yesterday. I never actually intended to write a memoir. I was called in to a meeting by CBS for what I thought was a conversation to offer me a new series. We talked for an hour and, apparently, I was so entertaining that at the end of the hour meeting, the president of CBS said, "You know we own Simon & Schuster."
I said, "I didn't know that."
She said, "We do, and I think you've got a book in you."
I said, "I don't usually write."
She said, "That doesn't matter. You're a storyteller, Sharon."
So I walked out with a book deal [laughs] with Simon & Schuster and not the series I was hoping for. Actually, I didn't meet (with) Simon & Schuster for another year. I sort of let it go. The next day there was a text from the president of Simon & Schuster. I sort of ignored it because I didn't want to do that. I wanted to act! A year went by, and I wasn't so busy, and I was in New York, and I said, "What the hell!" I went to meet him. I read one chapter to him, one chapter that I had written in case he asked for anything. He signed me that day [laughs].

Were you a journal or diary keeper or did you rely on your memory for the details?
Never. No. My very best friend Dawn (LaFreeda), who's been my best friend forever and... I'm a talker, a storyteller, and I would tell her stories about my life throughout our relationship. She kept them! She said, "You have a book in you." So, there's another person saying so. She kept the stories.

When Simon & Schuster made me the offer, Dawn dragged out all my stories. A couple of times I had gatherings at my house where I had four people over, and I said, "Ask me some questions," and put a recorder down. I'd just start talking. Then as more of my life coming out on the page, which is hard to do, I started remembering more and more. It took a form that I had always intended.

I came up with the title, Apparently There Were Complaints, very early on. I made the book about all the complaints people had about me throughout my life. It helped that Dawn had kept records of all the stories I've told. Some of those I used (in the book). It's funny, as you write, as you keep going, you start remembering more and more and more because one emotion leads to the next emotion or the next time someone hurts your feelings or the next complaint.

I'm glad you mentioned the emotional part of it, because writing a memoir means revisiting the past, including your complicated relationship with your grandmother, whom you called Grimmy, as well as your parents. Did you find it to be painful, freeing or both?
Sometimes because some of the memories were painful. There were times when I was reading some of it that I would go back to that place. I just finished recording it (the audiobook) a couple of weeks ago. What surprised me is when I'd get to certain places, especially about Grimmy, you can hear on the recording, my voice breaks. I left it in. They asked me if I wanted to (re-record it) and I said, "No. Leave it in." She was really the best thing that ever happened to me. It's that she was tough.

One of the things that stood out to me is the way that not only does it sound like you. I've interviewed you before, so in reading the book, it sounded like you.
Thank you! It's very important to me that you hear my voice in that.

It totally comes through. The other thing that shines through is your sense of humor and comic timing.
Thank you!

How important was it for you to make that aspect of your personality a part of the book?
Very important. I do have a sarcastic —not a mean sarcastic, a funny sarcastic— side. Some of the complaints and some of my addictions and some of the things I talk about... you've got to take some of it lightly or who's going to want to read that? Clearly, I survived. It's not all bad news. When I came up with the title, [laughs] which was perfect because there were so many complaints about me in my life, sometimes you just have to laugh, even at the sadder stuff. I'm still standing!

Yes, you are! Memoirs, like TV shows such as Finding Your Roots, are a way for both the subject and the audience to uncover fascinating details that might not otherwise have been public knowledge. The story about your boarding school classmate Gibbie, also known as the late Abigail Folger, in Chapter 7, feels like an example of that. Would you ever consider being on one of those genealogy-tracing shows?
I didn't know a show like that existed. I would never do something like This Is Your Life [laughs]. Remember that? I didn't know about a show that traces your genealogy. I'm always fascinated in my background. I'm certainly not opposed to anybody scraping up my genealogy. 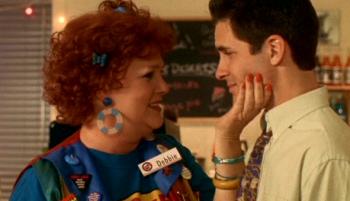 Sharon Gless with Hal Sparks in 'Queer as Folk'

You write about your interactions with LGBTQ people in your life, personally and professionally, and Chapter 43, titled "I'll Be There," which is about your experience playing Debbie Novotny in Showtime's Queer As Folk, made me weep. It was so beautiful. This is less a question than it is an expression of gratitude for being there.
Thank you! The pleasure, for lack of a better word, is all mine. You have all changed my life. I became so much more educated. I thought, "Oh, I know it all. All my best friends are gay." Right?

But I learned so much on Queer As Folk. The stories that they wrote and the performances. I didn't realize the real plight, the behind-the-scenes pain that went on in the gay community. Because of Queer As Folk I became quite educated and impassioned. I meant it when I said, "I'll be there."

The Peacock streaming service is doing a Queer As Folk reboot. What do you think about that?
Yes, I'm aware they're doing a reboot of it. What I think about it is I'm so sorry they're not using the original cast. It's never going to be better. But good luck to them, and I hope they have even close to the hit we were. I think the biggest star of that show right now is going to be the city of New Orleans. We'll see how the stories go.

Because the entertainment industry is a central component to your memoir, if Apparently There Were Complaints was to be made into a theatrical movie or TV miniseries, who would you want to play you?
It would take several actresses because there's a lot of years. If there was somebody who could span it. I'm a big fan of Jennifer Lawrence. She has a husky voice, too. And there's also an irreverence and a sensitivity to her. If anybody ever wanted to do that, I think she'd be great.

Finally, in addition to us both being Geminis, we also share South Florida as our home. What do you like best about living here?
The happiness on my husband's (TV producer Barney Rosenzweig) face. When he retired he moved us here. I'm married to a man who, if he's happy, everybody's happy [laughs]. He adores Florida. Los Angeles was always my home. I was born there, raised there. I'm an Angeleno, through and through. I've been to Los Angeles over the last year and I don't like what's happened to it. Now I'm grateful to be returning to an island as beautiful as the one I live on. Los Angeles needs a total reboot, rebuild, re-everything. It's fallen on hard times, L.A. I remember it when I lived there. It was a magical city.