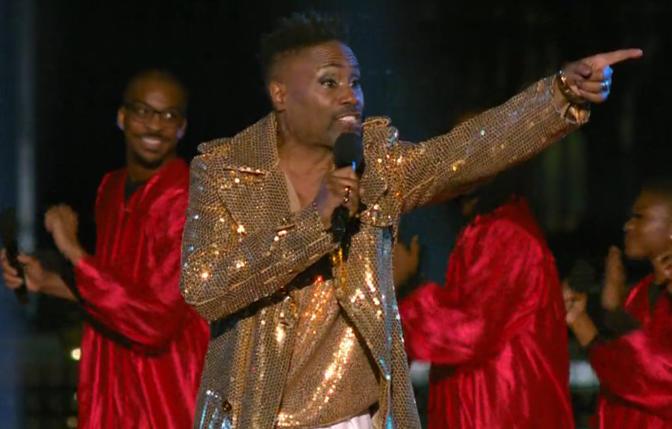 We don't know about you, but part of our holiday cheer is now hearing Billy Porter perform for the President, Vice President and their respective spouses for not one, but two holiday events.

You can catch the National Christmas Tree Lighting (be sure to input the whole cumbersome title) online or on demand at CBS.com.

It was spectacular! Queer ally Kristin Chenoweth was another featured singer and her duet with blues great Keb' Mo' was incredible. (And excuse us, but where is the portrait in the closet for Chenoweth, who refuses to age?)

Porter also sang "Go Tell It on the Mountain," and every gay choir master in America was swooning while Mahalia Jackson clapped along from the Great Beyond. Secretary of the Interior Deb Haaland, a member of the Pueblo of Laguna tribe and one of the first Native American women elected to Congress, introduced President Biden. She also referenced D.C. as ancestral lands of Native American tribes and was that ever a moment of representation and being seen.

Another can't miss special is PBS's holiday broadcast, In Performance at the White House: Spirit of the Season on December 21 at 8pm (check your listings). The event will be hosted by Jennifer Garner and feature remarks by President Biden and First Lady Jill Biden, and performances by Porter, Andrea Bocelli, Camila Cabello, Eric Church, Jonas Brothers, Norah Jones and Pentatonix.

If you need your annual shot of Mariah Carey to make your own Yuletide fabulous this year, you have to catch her on Apple+ Her special aired on Dec. 3, but there are workarounds on Google if you don't have Apple+.

With Love
Meanwhile, who is ready for a Latinx queer rom-com limited series for the holidays? Nosotras somos. The new Amazon Prime series With Love was created by One Day at a Time's Gloria Calderón Kellet. The delightful trailer will put you in the mood to see this fun, upbeat series.

With Love follows siblings Lily (Emeraude Toubia) and Jorge Jr. Diaz (Mark Indelicato) as, Amazon says, "In each of the five episodes, Lily, Jorge Jr., and the entire Diaz family navigate the highs and lows of love during a different holiday throughout the year: Christmas Eve/Nochebuena, New Year's Eve, Valentine's Day, the Fourth of July, and Dia de los Muertos."

Jorge is gay and "the pinnacle of style, and life of the party... after years of dating he has finally found a man good enough to bring home, but he is nervous about it."

As he should be. Jorge introduces his family to his boyfriend Henry (Vincent Rodriguez III ) on Christmas Eve/Nochebuena, saying, "They're okay that I'm down with the D as long as the D isn't the Devil."

Others featured on With Love include Isis King, the first trans woman to compete on America's Next Top Model, and Birdie Silverstein, the nonbinary child of actress Busy Philipps. Real diversity is a gift all year long! The show premieres on Amazon Prime Dec. 17.

Last Christmas
And apropos only of the season, check out the beauty that was young George Michael in the YouTube video of "Last Christmas," one of our favorite popular holiday tunes.

The ABC News special Superstar: George Michael aired Nov. 30, but we just watched it. It looks at the life and career of the legendary gay pop star and delves into how he reinvented himself from a teenage heartthrob to a global tight-leather-pants-wearing nouvelle superstar who made people of all genders swoon. The show includes interviews with Sam Smith, Paula Abdul and others who worked with Michael and were influenced by his music.

This was interesting and sad. The closet, self-loathing and the ways we find to comfort ourselves —like drugs and other illicit dangers— can be a killer. Come out, stay safe. There is a whole community here just waiting to embrace you in all your gay, lesbian, bi, queer, trans, GNC and NB authenticity. You are already loved!

Sex and the City, Redux
No spoilers, but OMFG adding Sara Ramirez, who we love to the latest iteration of Sex and the City, And Just Like That..., as Che, a nonbinary comedian and podcaster, was genius. The gang may be getting long in the tooth, but they still can change it up. And there is a lot that's fresh here. The new series drops at HBO Max Dec. 19. You'll love to see it!

Nielsen Study Finds Diversity Elusive
When it comes to diversity on TV, Nielsen finds that women and minorities are under-represented across all platforms, which is disheartening as 2021 draws to a close.

A new report, "Being Seen on Screen: Diverse Representation and Inclusion on TV," by the Nielsen ratings organization found that "presence is not the same as representation."

"Diverse identity groups" like women, people of color and LGBTQ appear more frequently on streaming shows than on broadcast or cable, which may account for why people are gravitating to those other platforms. Certainly we have shifted our reportage here in recent years to highlight streaming services, which have more expansive LGBTQ themes.

"Viewing audiences are increasingly seeking content that tells their stories," the study said, explaining that programs representing multiple identity groups evenly yielded higher overall audience ratings for all viewers when compared to shows that have a significant over or under representation of any one identity group.

Read more at Being Seen on Screen: Diverse Representation and Inclusion on TV

Guilty
Finally, the Jussie Smollett trial ended on December 9 with Smollett found guilty of falsely reporting a hate crime. The former Empire actor was charged with six counts of disorderly conduct on suspicion of making false reports to police in January 2019. The 12-person jury deliberated for more than nine hours.

We reported this as a news story at the time over some months. And while we certainly don't condone lying to police, we do question how this became a two-week trial instead of a fine and community service. Irrespective of what one thinks of Smollett or about what he was accused of (and we have been a victim of an actual violent hate crime, so we know about that), how on earth did this crime warrant the same amount of time and resources expended for the Kyle Rittenhouse trial?

Anderson Cooper and Don Lemon were quick to brand Smollett a liar post-verdict, while numerous legal experts claimed on CNN and MSNBC that the judge should/would give Smollett, who has never committed any crime, a jail sentence to "send a message." If only the judge in the Rittenhouse trial had felt the same way.

We have written extensively about hate crimes and how disproportionately they impact LGBTQ people, so we understand there is outrage that Smollett would lie about a hate crime. But Chicago leads the nation in murders, 739+ homicides when Smollett's trial began. What was the purpose of this trial, when every day, prosecutors make deals with actual murderers?

By putting Smollett on trial for lying to police, to make an example of him as a Black gay man, they actually underscored what we already know; that there are two tiers of justice in America. Let's work toward a system that metes out less punishment to those who murder people protesting violence against Black people than a Black man who lied about being a victim of such violence.

So for all the permutations of the season and more, you really must stay tuned.