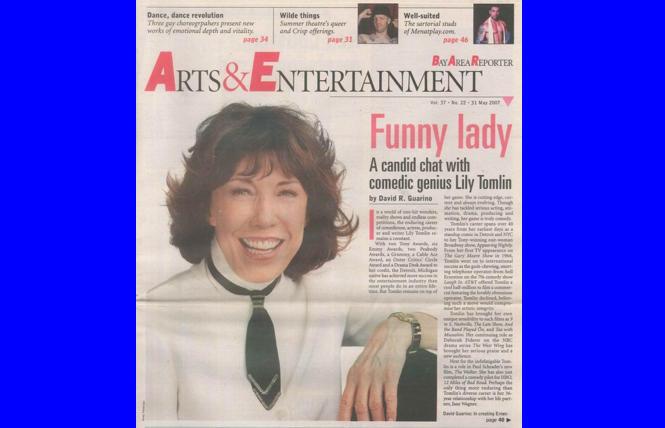 We could have scoured the year's worth of arts and nightlife articles, but then stopped. What's better than a concise interview with Lily Tomlin?

As David R. Guarino wrote in our May 30, 2007 issue, "Tomlin's career spans over 40 years from her earliest days as a standup comic in Detroit and New York City to her Tony-winning one-woman Broadway show, Appearing Nightly.

From her first TV appearance on The Gary Moore Show in 1966, Tomlin went on to international success as the gum-chewing, snorting telephone operator-from-hell Ernestine on the 1970s comedy show Laugh In. The star of 9 to 5, Nashville, The Late Show, And the Band Played On, and Tea with Mussolini, Tomlin was promoting her then-latest role in Paul Schrader's film, The Walker.

"I never really expected to be on TV, I just wanted to be a New York actor," said Tomlin in the interview. "So I used to go to the local improv and do my routines. As I started out with Ernestine, I began as a tough New York operator. As Ernestine threatened people, it became very organic, it was sort of sexually repressed, dealing with all that petty bureaucracy. My body reacted, got tighter and tighter, and my face got tight. And when my face gets tight, I snort! It's just one of those things that touches a nerve."

Asked about the growth and changes in the LGBTQ community, Tomlin said, "I'm sort of thrilled, and I really have to admire this generation. There has been a real spirit of community that is really strong and brilliant."

Read the full interview at www.ebar.com