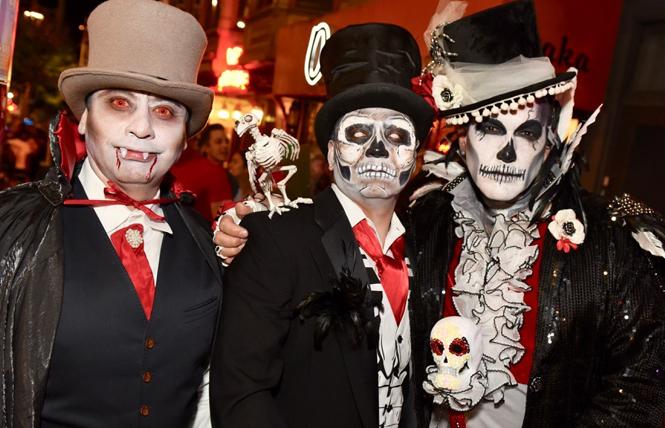 Costumed revelers partied in the Castro on Halloween in 2019. Photo: Steven Underhill

Halloween is a day that has held a special significance for San Francisco's LGBTQ community going back decades; but this year's is likely to be more noteworthy. Not only does the holiday fall during a weekend, it is expected to draw the most Halloween revelers since the COVID-19 pandemic.

As the Bay Area Reporter reported last October, community leaders asked people to stay home for Halloween. In a joint statement, gay District 8 Supervisor Rafael Mandelman and Masood Samereie, a straight ally who is the president of the Castro Merchants Association, wrote that while "celebrating Halloween in the Castro is a tradition that dates to the 1940s ... this year, amid the COVID-19 pandemic, we must put the health of our communities first."

What a difference a year makes. Nik Blanchet, the community liaison for the Castro Merchants, told the B.A.R. that "we absolutely want people to visit the Castro on Halloween weekend to celebrate the holiday and patronize our local small businesses in a safe and responsible manner."

"While there are no planned street closures, celebrants will find plenty of ways to enjoy Halloween all weekend long, including dining, shopping, and nightlife," Blanchet stated. "To put it mildly, Halloween participants in the Castro do not hold back when it comes to costume creativity and serving those lewks, so it makes for some amazing people-watching for everyone to enjoy."

Mandelman wrote to the B.A.R. that he hopes people will have safe fun.

"Celebrating Halloween in the Castro is a San Francisco tradition," Mandelman stated. "We know that people are excited to dress up and have a good time in the Castro's bars and restaurants this weekend, and I hope that everyone will enjoy themselves in ways that are COVID-safe and respectful of the neighborhood."

Terry Asten Bennett, a straight ally who is the co-owner and general manager of Cliff's Variety on Castro Street, told the B.A.R. that while Halloween-related sales were "not as much as [in] 2019," it was "double last year."

"Things are definitely picking up" as the holiday gets closer, Bennett said. "Except for Sunday [October 24], which was obviously its own anomaly."

October 24's "atmospheric river" caused the fourth-wettest day in the recorded history of San Francisco (and the wettest since 1994). The city saw 4.02 inches of rain, and as of the afternoon of October 26 there are still some 12,000 Pacific Gas and Electric customers in the Bay Area without power. Fortunately for revelers, this weekend, including All Hallow's Eve, is expected to be dry. October 31 will be partly cloudy with a high of 59 degrees and a low of 51 degrees, according to the weather forecast.

Bennett said that she hopes Halloween helps in the Castro's recovery from the lack of business for much of the past two years; though she doesn't want things to get too out of hand.

"Obviously as a business owner, I want to see all of our businesses in the Castro thrive and succeed," Bennett said. "I don't want to see Halloween be what it had been at this point. Obviously, given COVID, I don't want to see too many people gather in one place, but I do want to see us all have a successful weekend."

Blanchet directed potential visitors who want to dance to attend Comfort and Joy's Glow in the Streets fundraising event, which is October 30 from 4 to 9:30 p.m. on Noe Street between Market and Beaver streets.

Tickets are free, though Comfort and Joy is asking for a $10 donation at entry. When reached by the B.A.R., Comfort and Joy's Joshua Smith stated the event will open with DJs Eddie House and Shay, followed by performances and DJ Prince Wolf, before a costume contest before 8:30 p.m.

"Visitors and residents alike will find many options for enjoying the Castro on Halloween," Blanchet stated. "Restaurants and bars are already highly decorated and promoting entertainment and other special surprises. Store windows are awash with creepy displays. And, when it comes to actually finding a costume (because your creative juices may be missing of late), no neighborhood is better for scaring up a great last-minute outfit. ... We encourage everyone to get out and support small businesses in the Castro for Halloween!"

SFPD providing extra staffing
Mission Station Police Captain Rachel Moran, a straight ally, told the B.A.R. that the department will have extra staffing for the Castro on the nights of October 30 and 31, but would not get more specific. The San Francisco Police Department is bracing for a potentially busy weekend, Moran said, with the Outside Lands Music and Arts Festival in Golden Gate Park (which usually takes place in the summer), overlapping with Halloween weekend.

Halloween — with its outrageous and creative costumes, the symbolism of living behind a mask or a costume, and the fear of some conservative Christians — has long been a big day for LGBTQ people. Halloween festivities in the Castro, which descended from celebrations among queer people in the Tenderloin, North Beach, and Polk Gulch in the mid-20th century, became one of the premiere events of the year for the neighborhood by the turn of this century.

But with tens of thousands of people descending upon the Castro — including gay bashers — it became hard for the city to ensure public safety at the event. In 2002, four people were stabbed on Halloween night in the Castro; but the death knell for the old-time Halloween festivities was in 2006, when nine people suffered gun-related injuries in a mass shooting while a 10th victim was trampled in the melee that marred the annual street party.

Accordingly, the California Department of Alcoholic Beverage Control announced October 25 that it'll be on the lookout for law-breakers this weekend.

"ABC agents will check on compliance with alcoholic beverage laws to reduce alcohol service to obviously intoxicated patrons and underage youth. Licensees need to make sure their employees are checking identifications carefully to prevent youth access to alcohol," a news release states. "ABC also advises anyone of legal drinking age to help reduce DUIs by designating a non-drinking driver before traveling to a location where alcohol is sold."

Eric Hirata, the director of the ABC, stated that the bureau "encourages everyone to discuss how to make Halloween celebrations as safe as possible."

To help revelers avoid drinking and driving the regional transit service BART is running its trains later than usual on Halloween. BART will extend its service hours from 9 p.m. to midnight with a limited late-night service.

Other activities
Over the hill from the Castro, in Noe Valley, gay state Senator Scott Wiener (D-San Francisco) will be hosting a "festive and safe Halloween celebration" at the Noe Valley Courts (at 24th and Douglass streets) from noon to 3:30 p.m. October 30. The celebration will feature drag queens Juanita MORE!, D'Arcy Drollinger, and Mercedez Munro judging pumpkin carving.

Pre-scooped pumpkins will be provided, and awards will be given.

"I'm thrilled we're back to an in-person pumpkin carving contest," Wiener stated. "It's a great opportunity to come together, celebrate our community's successes, decorate beautiful pumpkins, and get some side eye judging from three amazing drag queens."

Sunday two pet stores owned by out women in Noe Valley on Church Street - Noe Valley Pet Company and Maxwell's Pet Bar - are co-hosting the fifth annual "Howl-O-Ween Pet Parade and Costume Contest." The event kicks off at 2 p.m. October 31 from 1451 Church Street, and only those pet owners and their costumed canine companions who walk in it will be judged.

Sister Roma, of the Sisters of Perpetual Indulgence, will be hosting Nob Hill's HalloQueen drag brunch October 31 at noon at the Fairmont Hotel, 950 Mason Street. Tickets start at $125. MORE! will be DJ. (This is not an official SPI event.)

"Halloween is San Francisco's favorite holiday and I'm so excited to bring some of the city's most talented and adored drag performers to the iconic Fairmont," Roma stated to the B.A.R. "The hotel is going all out with fabulous decorations, a five star menu and bottomless mimosas and bloodies - it doesn't get any better than this."

At the Glen Park Recreation Center October 30 from 3 to 9 p.m. there will be a haunted house, crafts, music, and food vendors. Dubbed "Nightmare on Elk Street," the event is free. Proof of vaccination is required to enter the haunted house.

In the South Bay, the Qmunity District is hosting a Halloween event in downtown San Jose October 31 at 7 p.m. on Post Street between Market and First streets. People can win up to $500 at the Qmunity Night Circus costume contest and Aiden Zhane from "RuPaul's Drag Race" will be performing.