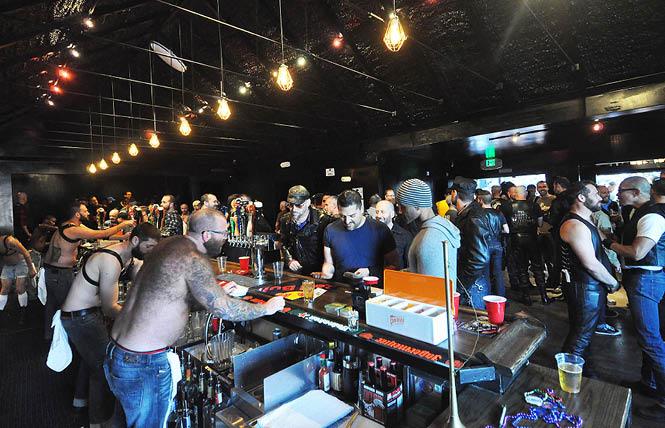 The day after San Francisco's South of Market neighborhood celebrated the return of the in-person kink-themed street fair normally held the last Sunday of September, this year called Megahood2021, a San Francisco Board of Supervisors committee unanimously recommended landmark status for a longtime leather bar.

The supervisors' Land Use and Transportation Committee voted 3-0 to forward landmarking the Eagle bar on to the full board with a positive recommendation at its meeting September 27. It is expected to be approved at the October 5 meeting, the board's first during LGBTQ History Month.

District 6 Supervisor Matt Haney, who represents the area, instigated the landmark process last year shortly after the property at the corner of 12th and Harrison streets was put up for sale. Speaking on his behalf at Monday's committee meeting was his legislative aide, Honey Mahogany.

"The Eagle first opened in February 1981," Mahogany said during her presentation. At one point, the so-called Miracle Mile, on Folsom and Harrison streets, counted some 30 leather-oriented businesses in the 1970s and 1980s. Now, the Eagle is one of the few leather bars remaining, Mahogany noted.

It was shuttered for two years between April 2011 and March 2013 when Lex Montiel and his late business partner Mike Leon took over the ownership and management of the Eagle at 396-398 12th Street. Montiel addressed the supervisors during public comment to voice his support for landmarking the bar best known for its Sunday beer bust fundraisers on its outdoor patio.

"The San Francisco Eagle has been an institution for many, many years," he said, adding that landmark status is consistent with the bar's mission of serving as a space "open to every color and flavor of our community."

Frances McMillen, a senior planner with the San Francisco Planning Department, briefly outlined the staff report that supported landmark status. She pointed out that during the height of the AIDS epidemic, the Eagle held numerous fundraisers to help nonprofit agencies that served people living with HIV/AIDS. That community spirit and activism continues today. (The Eagle, like other bars, was closed for months starting in March 2020 due to the COVID-19 pandemic. It was one of the last to reopen, and, as Mahogany noted, was part of the leather weekend festivities.)

At the beginning of public comment, an unnamed person railed against the proposed landmark status for the Eagle, calling it a "perversion to this city." The caller dropped off before saying anything else.

In May, the city's Historic Preservation Commission voted 7-0 in support of landmarking the bar.

The Board of Supervisors in February approved the landmarking process for the roughly 5,153 square foot, irregularly-shaped rectangular lot that now fronts the Eagle Plaza built on a block of 12th Street. The public parklet is named in honor of the bar and honors the local leather, kink, and LGBTQ communities.

After the preservation advisory panel weighed in on the matter, the supervisors' land use and transportation committee was the next step. The Eagle is set to become the eighth property in the city with ties to LGBTQ history to be designated a city landmark and the first related to leather history.

It will also be the second leather Eagle bar in the country to be deemed a city landmark. As the Bay Area Reporter previously reported, Atlanta officials christened their Eagle bar, which opened in 1987, a city landmark in December 2020.

The San Francisco Eagle will be the city's third gay bar location to be landmarked, as the Twin Peaks bar in the Castro and the former Paper Doll restaurant and bar site in North Beach are already city landmarks. The former home to the AIDS Memorial Quilt on upper Market Street in the Castro and the late gay supervisor Harvey Milk's residence and former Castro Camera shop at 573 Castro Street are also city landmarks.

In mid-June the Noe Valley home of the late lesbian pioneering couple Phyllis Lyon and Del Martin became an official city landmark. Gay District 8 Supervisor Rafael Mandelman authored the resolution unanimously supported by the Board of Supervisors and the mayor that landmarked the Lyon-Martin House at 651 Duncan Street.

The Japanese YWCA/Issei Women's Building at 1830 Sutter Street also in June became an official city landmark as the supervisors and mayor approved granting it such status earlier this year. The Japantown Y site was where the pioneering gay rights group the Mattachine Society hosted its first convention in May 1954, and the late gay African American civil rights leader Bayard Rustin taught there at one time.