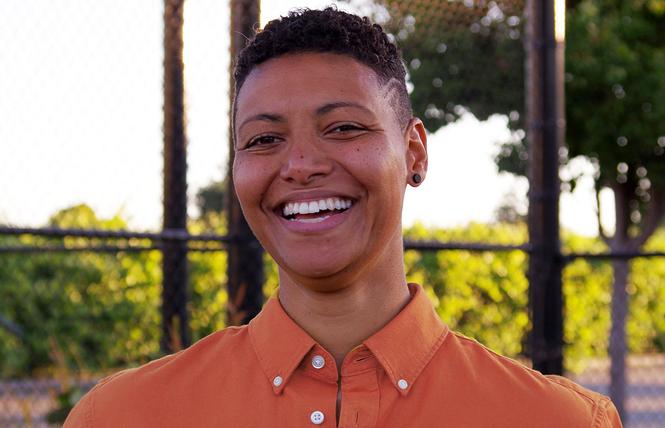 First-time political candidate Jennifer Esteen has been scooping up early endorsements from around the Bay Area for her 2022 bid for Alameda County's 20th Assembly District seat, currently held by Assemblyman Bill Quirk (D-Hayward). The Democrat has called the East Bay home for nearly two decades, and as the daughter of a Black mom and a Jewish dad, she would be the first out Black member of the Legislative LGBTQ Caucus if elected.

Esteen, a gay, masculine of center woman, is a former psychiatric nurse in the San Francisco General Hospital Psychiatric Emergency Room and now serves as vice president of organizing for Service Employees International Union Local 1021. She launched her campaign in August to represent the district that currently includes Castro Valley, Fremont, Hayward, San Lorenzo, Sunol, Union City, and Ashland, an unincorporated area where Esteen lives with her wife and children.

This week, both the Harvey Milk LGBTQ Democratic Club and San Francisco Democratic Party Chair Honey Mahogany, the first queer transgender nonbinary person to lead one of the state party's local affiliates, came out in support of Esteen.

"When Jennifer wins, she will also make history as the first openly gay Black Assembly person in California," stated Mahogany, who personally endorsed Esteen. "I have seen firsthand that the people who need their elected leaders most are the ones too often left behind. We need more bold, unapologetically progressive leaders who are willing to fight for the needs of everyday working class and poor people."

Milk club co-president Edward Wright noted that its members only early endorse "exceptional candidates, and Jennifer Esteen is exceptional." He pointed to her securing expanded paid leave for contract nurses during the COVID pandemic as just one reason why the progressive group wanted to support her nearly nine months before the June primary.

Union organizer Alexis Villalobos, a queer Hayward resident who ran against Quirk last year, also endorsed Esteen this month. His 2020 campaign was bare bones and he didn't seek out support from hardly any LGBTQ political groups or leaders, yet Villalobos still netted 43% of the vote against the incumbent lawmaker.

"The people who voted for me will vote for her, based on her values," Villalobos, 28, told the B.A.R. "I think she is a lot more prepared, having been a union organizer longer than me, and has a lot more political experience than I did when I first ran."

Based on how well he was still able to do in the 2020 race, and how better prepared Esteen appears to be for her campaign, Villalobos predicted she would be a formidable opponent in next year's contest.

"Bill Quirk is going to think the gays have it out for him," joked Villalobos. "I think her chances are really high. That said, I think Quirk knows that too and I think he is scared."

A campaign consultant for Quirk did not respond to the B.A.R.'s interview request by the paper's press deadline Wednesday. First elected in 2012, the former Hayward city councilman and nuclear physicist is seeking a sixth and final two-year term in the Legislature's lower chamber.

Quirk, 75, reported having nearly $200,000 in his campaign account as of July 1. Because of term limits, he will be termed out of office in 2024 if reelected next November.

Because of the decennial redistricting process now underway, Quirk could find himself drawn out of his Assembly seat. He lives with his wife in a retirement community in Union City.

With his district potentially in flux, the 2022 contest is drawing interest from Alameda County leaders looking to move up to Sacramento. Democratic Fremont City Councilwoman Teresa Keng kicked off her campaign for the seat over Labor Day weekend.

In a Facebook message Keng, 46, who emigrated from Taiwan at the age of 15 with her sister, explained that she decided to seek the Assembly seat because of "the hardships faced by our communities during this pandemic. My heart breaks for those who have lost loved ones to COVID, those who've lost their jobs, the small businesses that couldn't survive, and for our children who missed out on critical education and the much-needed social interactions."

Coming out journey
As for Esteen, who will turn 41 on Halloween, she hails from New Orleans and first came to California after college in June 2003 with her then-husband shortly after the birth of their first child. She was following a brother out west who had found success selling homes in the Bay Area.

The couple divorced after the birth of their second child, and Esteen began her coming out journey. She teared up recalling the difficulty she had in accepting her sexual orientation during a recent phone interview with the B.A.R.

"It took years. As a kid I was a big old tom boy," she recalled. "I didn't know how to accept myself; I had a lot of shame."

One of the hardest decisions she had to make was sending her two small sons to live with her parents back in New Orleans for six months while she attended an accelerated nursing school program. With limited income Esteen nearly lost her housing, but she persevered and landed a job with San Francisco's public health agency.

She would later remarry and her wife, a marriage and family therapist, for now wishes to remain private due to her field of work. They have three children between them; Esteen's son Barry is now 20 and younger son Jalen is 16, while her stepdaughter, Mylo Swinn, is also 16.

Asked about potentially breaking through another pink political glass ceiling in the Legislature, Esteen told the B.A.R. it is "way overdue" for the state's Black LGBTQ community to have a voice serving in the Statehouse.

"I have an opportunity to stand up as an example for all young Black gay folks and the community at large because of where I have been and the work I have done. So I am super honored to be able to attempt to be the first," said Esteen. "There is no time better than today during this horrific global health crisis that a woman like me would be able to stand up and serve."

Web Extra: For more queer political news, be sure to check http://www.ebar.com Monday mornings for Political Notes, the notebook's online companion. This week's column noted the 10th anniversary of the repeal of the military's homophobic "Don't Ask, Don't Tell" policy.