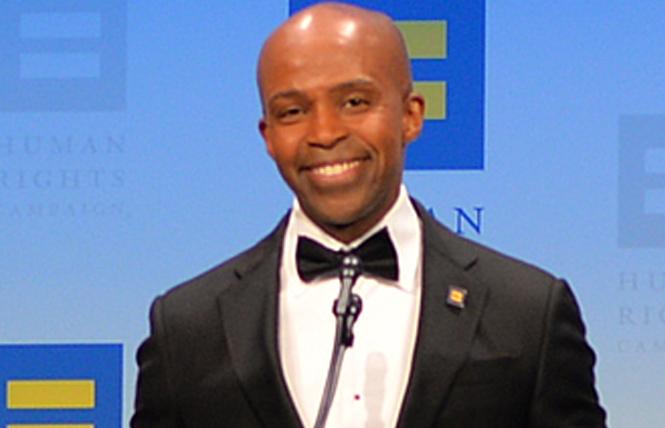 Alphonso David led the Human Rights Campaign for two years before he was terminated "for cause" September 6. Photo: Michael Key/Washington Blade

It's not easy for a nonprofit board to reach the stunning conclusion that it must fire its leader "for cause," but that's what the board of the Human Rights Campaign and its Human Rights Campaign Foundation did late September 6. It was a decisive and courageous move when it became clear that now-former HRC president Alphonso David made poor decisions that backfired on him with respect to trying to help his old boss, disgraced former New York governor Andrew Cuomo, counter allegations of sexual harassment. As the nation's largest and wealthiest LGBTQ rights group, HRC had been in the media spotlight since New York Attorney General Letitia James' scathing report on Cuomo came out in early August. The report found that Cuomo violated the law by sexually harassing as many as 11 women on his staff. Cuomo resigned weeks later.

David, who had served as counselor to Cuomo prior to his taking the helm at HRC, was mentioned nearly a dozen times in the report. The most damaging claims in the report concerning David indicate that he allegedly said he would help find individuals to sign their names to a draft op-ed that sought to discredit a sexual harassment survivor — ultimately the op-ed was never submitted or published — although he wouldn't sign the document himself, as the Washington Blade reported. Also, the report indicates David was involved in the discussions about secretly calling and recording a call between a former staffer and another survivor in a separate effort to smear her.

According to the Blade, the report indicated that after his job with Cuomo, David kept the personnel file of an employee who had accused the governor of sexual misconduct, then assisted in returning that file to Cuomo staffers seeking to leak it to the media in an attempt to discredit her. (The Blade reported that a representative has disputed the characterization of materials David kept as a personnel file, saying it was a memorandum on an internal employment matter David kept because he, in part, worked on it. David has said he was legally required to return the material.)

Regardless, David's alleged actions, as outlined in James' report, put the HRC board in an untenable position. The organization has been under criticism for weeks from donors, staff, and others and was forced to hire a law firm to complete an investigation into the matter. It was after that review was completed that HRC's board asked David to resign September 3. He refused, so it terminated his contract, effective immediately.

"At HRC, we are fighting to bring full equality and liberation to LGBTQ+ people everywhere. That includes fighting on behalf of all victims of sexual harassment and assault," HRC board co-chairs Jodie Patterson and Morgan Cox wrote. "As outlined in the New York Attorney General report, Mr. David engaged in a number of activities in December 2020, while HRC President, to assist Gov. Cuomo's team in responding to allegations by Ms. Boylan of sexual harassment. This conduct in assisting Governor Cuomo's team, while president of HRC, was in violation of HRC's Conflict of Interest policy and the mission of HRC." The statement was referring to Lindsey Boylan, a former senior staffer for Cuomo, who was among the first to accuse him of sexual misconduct in the workplace last year.

David was an inspired choice when HRC tapped him to take over as president a couple of years ago. A gay Black man, David was the first person of color to lead HRC, working hard to move beyond the agency's reputation of mostly catering to cis white wealthy LGBs. HRC has long had a dismal record when it comes to working with the trans community, and that, too, began to change. Under his leadership, the agency constantly went on the attack against numerous state legislators that sought to pass anti-trans bills this year, elevating the attention these draconian pieces of legislation received in mainstream news outlets and elsewhere.

But the LGBTQ movement does not need leaders who work to support sexual harassers. While the above-mentioned op-ed was never published, it's alarming that David actively sought to get people to sign their names to it when he would not do so himself. We don't pretend to know the intricacies of New York state government, but suffice it to say a former government employee should not hold on to personnel or other information about employees.

David's abrupt departure couldn't come at a more inopportune time for HRC. It's high priority Equality Act is all but dead in Congress since the Senate shows no signs of voting on it, and the organization will need leaders, staff, and volunteers ready to hit the ground next year in the midterm elections. It will need to continue monitoring all the anti-trans legislation that the organization is now fighting, and it needs to raise boatloads of money to do all that work in an environment where LGBTQs have been hit hard — economically and health-wise — by the COVID-19 pandemic.

Patterson and Cox stated that as a consequence of David's conduct, "material damage" to HRC/HRCF's "interests, reputation, and prospects has resulted or may be expected to result. Additionally, this conduct has created damage to Mr. David's reputation significant enough to impair his ability to effectively serve as the public face and voice of HRC/HRCF. This damage is evidenced by the intense media surrounding this conduct as well as the hundreds of calls, emails, and other negative communications HRC has received from staff, members of the Board of Governors, volunteers, program partners, general members, supporters, corporate partners, political figures, and more expressing serious concern with Mr. David's conduct and its inconsistency with the values and mission of HRC."

David should have tendered his resignation as soon as the New York AG's report was issued. Sadly, his actions since then have only shown that he is not the leader the LGBTQ movement needs. The HRC board made the right call. It should look for a new president who will continue David's work and outreach without the baggage and bad decision-making. And it goes without saying that hiring another LGBTQ person of color should be a board priority.