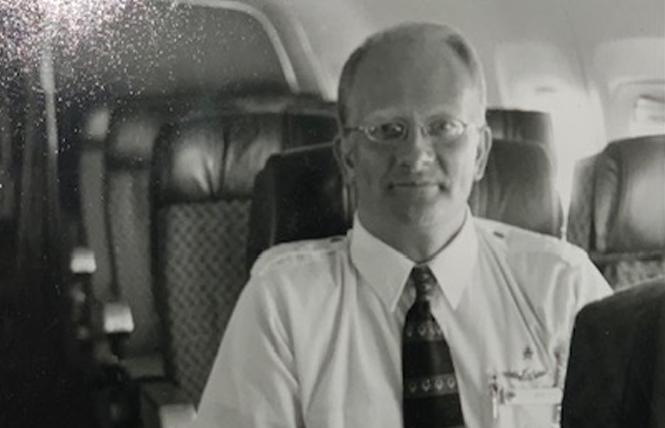 Flight attendant Jeffrey Collman is seated in his favorite plane the 767, which incidentally was the type that he died in, his surviving partner said. Photo: Courtesy Keith Bradkowski

Keith Bradkowski recalled that his partner, Jeff Collman, was such a sound sleeper that he didn't wake up even during the 1994 Northridge earthquake despite living near the epicenter in Southern California. So it was very unusual that Collman woke up just after 2 a.m. in Boston and decided to call Bradkowski at the couple's home in Novato.

"He just told me how much he loved me and that he couldn't wait to come home at the end of the week," Bradkowski recounted in an interview with the Bay Area Reporter this week.

That phone call lasted about three minutes but it's one Bradkowski will never forget. Collman, 41, was an American Airlines flight attendant. The date was September 11, 2001. Less than seven hours after the call, Collman would be one of 92 people onboard American Airlines Flight 11, as terrorists flew it into the North Tower of the World Trade Center in New York City. As the only male flight attendant onboard, Bradkowski believes Collman was likely among the first people the terrorists killed as they took control of the plane.

Bradkowski, 65, now works as a nurse in Santa Maria, in Santa Barbara County. In years past, he has attended memorials in Boston with the other victims' loved ones. This year, on the 20th anniversary of the attacks, he plans to spend a quiet time at home with his memories of Collman. He has already told friends he won't be taking calls that day.

Bradkowski noted that this time of year marks also the anniversary of when he met Collman, as well as his birthday. The anniversary of their meeting was August 25. They had been together just over 11 years at the time of his death. September 28 is Collman's birthday. The couple had planned to spend his 42nd birthday in Milan, Italy. 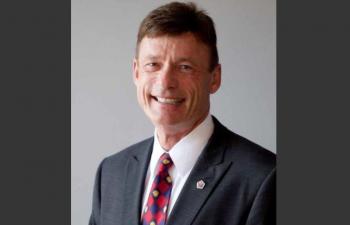 "I just never ever saw myself being a lobbyist, but it was what got me out of bed every morning. I had this passionate energy that drove me every day," Bradkowski said of his work to help change the law and business policies.

He attended the signing ceremony for the bill with then-Governor Gray Davis on September 10, 2002 and flew to Boston right after to attend the first memorial gathering there. Initially, American Airlines gave Collman's final paycheck to Collman's parents but with the help of Lambda Legal, Bradkowski met with an American Airlines official and got the company to change its policy regarding domestic partners and he was able to get the compensation payment from the airline that they gave to other families of employees on the flight. He was also able to negotiate a payout of 60% of the September 11 Victims Compensation Fund, with the remaining 40% split between Collman's divorced parents. The total amount varied for each victim depending on age and other factors. The total for Collman was in the range of $700,000 to $800,000 Bradkowski said.

Collman's life is chronicled in the 2007 book "Jeff's Way" by Douglass O'Keeffe from iUniverse. Bradkowski explained that Collman's story was originally just a chapter in a book about 9/11 victims but the publisher was so taken by Collman's life story that he asked O'Keeffe to write the whole book on his life. Bradkowski noted that Collman struggled to overcome a tough childhood after his mother walked out on his family when he was 8 or 9 years old. He said Collman told him that he stopped crying one day and he refused to let it destroy his life, despite having to spend time in the foster care system.

"What he did was he swore that day that he stopped crying that he would never have another bad day in his life, and he never did. And no matter when we would have challenges or problems, we never ever went to bed angry with each other. Never, never. And that's something that he always insisted on," Bradkowski said.

The Bette Midler song "Wind Beneath My Wings" from the "Beaches" movie was popular when the couple met, and Bradkowski said it became their song.

"We felt we each completed each other to a degree and that song just, it was ours," Bradkowski told the B.A.R.

He often started to write a letter to Midler to thank her for the song and to tell her how it helped honor Collman's memory and helped him through tough times but each time when he tried to write to her, he became overwhelmed with emotion, got writer's block, and couldn't continue. After 20 years, he finally wrote his thank you to Midler in July and hopes he will one day hear back from her.

Bradkowski often looks at a letter he got from Collman on the couple's 10 year anniversary on August 10, 2000, especially during this time of year around the anniversary of when they first met, Collman's death, and his birthday.

"I love you truly, Keith Alan Bradkowski," Collman wrote, "don't ever forget that when you are feeling lonely, I am not home with you, just pull out this letter and read my words to you once again and know how much you mean to me now and always."