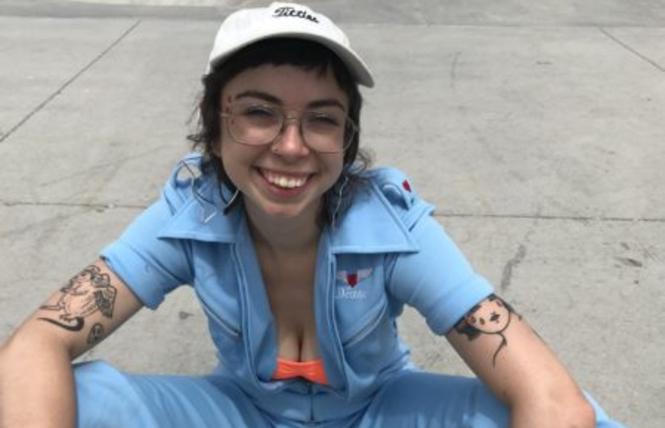 With 2021 proving to be a record year for anti-transgender legislation in statehouses across the country, activists in Montana are trying to change perceptions on the ground in the wake of three of those bills becoming law.

Izzy Milch, a 24-year-old queer, nonbinary person who is an advocacy organizer with Forward Montana, said many of the debates about those bills were chock-full of ignorance, both willful and not.

"It's become really clear a majority of Montanans have no idea what it means to be trans," Milch told the Bay Area Reporter. "So we are really trying to shift that narrative by working with educators about how to work with queer students and build community between trans Montanans and their neighbors, to clear up these misconceptions."

According to Milch, among those misbeliefs is the idea that people "become" transgender, not that they are transgender, and/or that only after gender-confirmation surgery is someone transgender. Trans people, of course, determine their own gender identity and some people opt not to have surgery.

These topics became a discussion point on Senate Bill 280, which requires proof that someone had gender-confirmation surgery before they can change the gender marker listed on their birth certificate. It was signed into law April 30 by Republican Governor Greg Gianforte, who replaced Democrat Steve Bullock as chief executive of the Big Sky state earlier this year.

Gianforte also signed SB 215 into law, which as the B.A.R. previously reported, will likely lead to the state being put on travel ban lists being kept by San Francisco and California officials.

San Francisco not only bans taxpayer-funded travel for nonessential trips to states that have adopted anti-LGBTQ laws since 2015 but also outlaws city departments from contracting with businesses located in those states. The city also now bans its employees from using taxpayer dollars to travel to states that restrict access to abortion services.

Once enacted, the Montana law will be reviewed by both the offices of California Attorney General Rob Bonta and San Francisco City Administrator Carmen Chu to see if it requires placing the Big Sky Country state onto the no-fly lists kept by each office.

Milch explained that "SB 215 is the Religious Freedom Restoration Act. It allows any entity to claim a religious exemption to pretty much any law focused on non-discrimination."

The Human Rights Campaign, a national LGBTQ rights organization, noted that the first anti-transgender bill passed through a legislative chamber in any state this year was House Bill 112 in Montana.

HRC announced back in March that this year marks "the highest number of anti-transgender bills in history." It singled out SB 215 and HB 112 for criticism.

"SB 215 will have a significant impact on vulnerable communities in Montana — including people of faith, women, and LGBTQ people," gay HRC President Alphonso David stated. "It will also jeopardize Montana businesses that voted for Governor Gianforte with the hopes of getting the state's economy back on track. Let me be clear: religious liberty and equality are not mutually exclusive, and Montanans will not stand by as Governor Gianforte and fearful legislators seek to actively discriminate against the LGBTQ population."

As the B.A.R. reported in February, HB 112 was designed to prohibit transgender women and girls from participating on female sports teams. Gianforte signed it May 7.

HRC reported that the Alliance Defending Freedom, a religious right nonprofit designated as an anti-LGBTQ hate group by the Southern Poverty Law Center, wrote HB 112. (The alliance has not responded to multiple requests for comment.)

Montana state Senator Bryce Bennett (D) railed against these new laws in a statement to the B.A.R. He was one of several senators on the Democratic side that Milch said Forward Montana has a good relationship with.

"Out of touch legislators spent the session pushing an agenda to legalize discrimination and tell our transgender friends and neighbors they were not welcome in Montana," Bennett wrote in an email. "They stripped away their rights and mocked their struggle, but we fought back and will keep fighting back. Transgender people need to know we have their backs and will stand side by side with them in the march towards equality."

Some anti-trans legislation defeated
Some legislation went too far even for those willing to support the three bills that passed, Milch said.

One of those was HB 427, which Milch said would have "banned surgeries for trans people that would have been allowed for cisgender people in medical necessity." That bill was indefinitely postponed April 20 after failing a State Senate vote 27-22.

"A lot of the argument came from things like medical privacy — getting between doctors and patients," Milch said. "It couldn't be defended, and things like that got to more moderate Republicans."

Another bill that was defeated was HB 113, which would have banned gender-affirming care to trans youth, such as puberty blockers. It died in the Montana House of Representatives, as the B.A.R. contemporaneously reported, in January after 20 Republicans joined all 33 Democrats to vote against it, leading to a final vote total of 49 in favor, 51 opposed.

"We are focused a lot on building community support for trans people, especially youth," Milch said. "We've always been here and will continue to be here."

"The first organizing I did was with a bunch of queer people in Missoula, throwing like a queer dance party, partnering to bring community, and making a small town a little more queer," Milch said.

Milch said there are several reasons that speaking out is important to them.