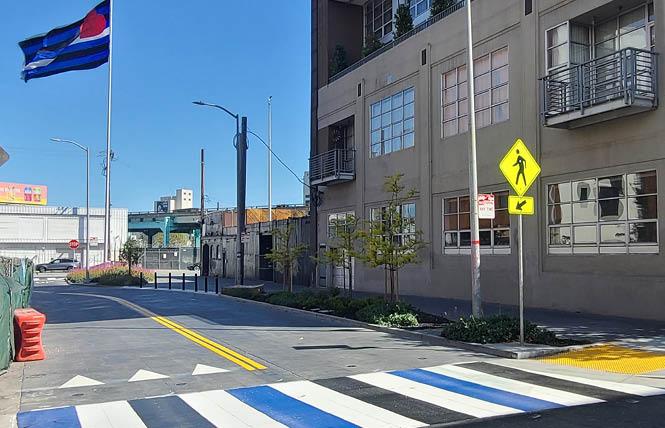 Several projects celebrating the leather and kink history of San Francisco's South of Market neighborhood are inching along, from the completion of a public parklet named after an iconic bar to the installation of sidewalk markers recognizing current and former LGBTQ businesses in the area.

A new crosswalk sporting the blue, white, and black colors of the leather flag now marks the start of the Eagle Plaza public parklet on 12th Street at Bernice. The $1.85 million project, begun in 2019, is turning a portion of the roadway into a community gathering space. Nearly complete, it is named after the gay-owned Eagle bar that sits on the corner of 12th and Harrison streets at the other terminus of the parklet.

According to the Leather & LGBTQ Cultural District similar leather-themed crosswalks could one day greet pedestrians at various spots on Folsom Street. Once known as "The Miracle Mile" due to the scores of businesses catering to the LGBTQ and leather scenes located on or near it, Folsom Street is set for a coming makeover to increase pedestrian safety along one of the main arteries through SOMA.

As part of the Folsom-Howard Streetscape Project, which will also bring safety improvements to Howard Street, the leather district is advocating that the San Francisco Municipal Transportation Agency include decorative crosswalks inspired by the leather flag at the alleys that cross Folsom from Seventh to 11th streets. It would also like to see signs for the leather district installed on street light and traffic light poles in the area, as well as the leather pride flag painted on them, as has been down with the city's transgender district in the Tenderloin.

"Construction might not start until 2022, but we will continue working to make sure our history and culture is respected and reflected," states the leather district on its website about the SFMTA project.

In the meantime, the leather district has been in close talks with the city's Public Works Department and the office of District 6 Supervisor Matt Haney, who represents SOMA, about incorporating 14 of the sidewalk plaques marking historic LGBTQ business locations along Folsom Street as part of a pedestrian safety improvement project that city agency has underway.

As the Bay Area Reporter first reported in September, bronze plaques one day will be found in the sidewalk near where the various LGBTQ bars, shops and bathhouses operated or currently are located. At one time there were more than 120 such establishments, but today the number is down to 12.

Such storied establishments as the Folsom Street Barracks, The Arena, Ramrod, The Brig, and the Club Baths of San Francisco would be memorialized with the historical markers. Ones would also be installed at the Eagle bar and The End Up nightclub at the corner of Sixth and Harrison streets.

Leather district leaders have been working with local LGBTQ historians Shayne Watson and Gayle Rubin, who specializes in leather history, to finalize the list of locations. The Board of Supervisors endorsed the plaques April 6, while the San Francisco Arts Commission's civic design review committee unanimously approved the sidewalk markers at its meeting April 19.

Lesbian artist Debra Walker, one of the committee's five members, joked she had been to or visited nearly all of the 124 LGBTQ businesses currently identified by the leather district.

"It really is amazing to go through the South of Market area and realize how many places have closed," said Walker. "A lot of us came to San Francisco because it is a welcoming place, and we had a place to socialize and create a family, so I think it is really important we note this like we do. These sidewalk plaques are really effective; even if you are not looking for them, you see them as you are walking. I love the ones in the Castro, so looking forward to seeing these."

Walker was referring to the bronze plaques found along upper Market Street and that are on or near the 400 and 500 blocks of Castro Street that honor historic LGBTQ individuals. Berkeley-based Artworks Foundry, which created the Rainbow Honor Walk plaques, would be hired to fabricate the leather district plaques, whose design was created by Jon Stoa.

The bulk of the plaques will be installed between Fifth and 12th streets in SOMA, noted Cal Callahan, the leather district's manager, during Monday's design review hearing. Roughly 80 locations have already won approval from city leaders to receive plaques, with the others identified by Watson and Rubin to be added to the official list in the future.

"They have gone back a number of years to make note of all the notable institutions, businesses, and other places of interest in the district," Callahan told the arts commissioners.

Other items
In other news, the leather district is seeking the names of local, living LGBTQ community members for a photomural installation the SOMA West Community Benefit District is planning to display on a prominent Folsom Street building. Suggestions can be emailed to arts-chair@sflcd.org

And in conjunction with Folsom Street Events, which puts on the city's two fetish fairs each year, the leather district will be taking part in SOMA Second Saturdays. It will be setting up a booth at Folsom and Dore streets from noon to 5 p.m. May 8 and June 12.

It is inviting a few kinky vendors and nonprofits to join it, while the gay bar Powerhouse located at that site will be serving food and beverages outdoors. Participants will be asked to follow all COVID-related masking and distancing requirements in force on those days.