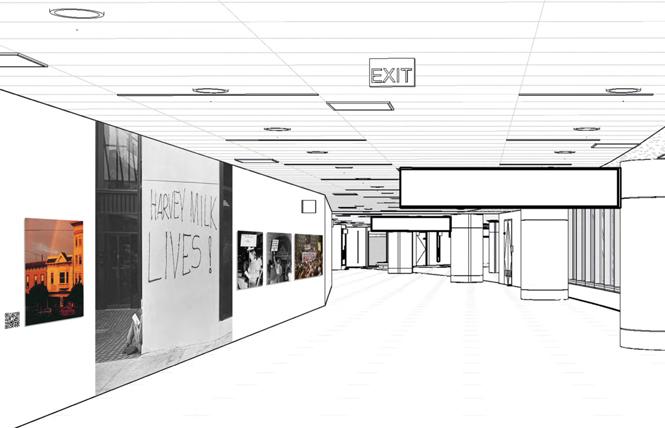 The recent news was surprising. While we always knew that the massive photographic exhibit detailing the life and political career of the late gay supervisor Harvey Milk in the terminal named for him at San Francisco International Airport was temporary and would be disassembled, we did not know that instead of being carted off to storage (or worse!) it would find new life elsewhere in the facility. As we reported, SFO officials have now decided to remount this larger installation in the Milk terminal's customs corridor, which is a passenger walkway connecting Harvey Milk Terminal 1 to the International Terminal Boarding Area A. The customs corridor inside the post-security section of the Milk terminal is where passengers disembarking from international flights will walk through as they make their way to the U.S. Customs and Border Protection checkpoint. It is expected to open this fall, and the Milk exhibit will remain on display indefinitely. This new location will expose even more people to Milk's biography as the first openly gay person to win elected office in San Francisco and California when he joined the Board of Supervisors in 1977. Tragically, he and then-mayor George Moscone were assassinated by disgruntled ex-supervisor Dan White in November 1978.

"We thought the panels would be shuttered and not exhibited anymore. We are excited they will live on in the customs corridor," said Tim O'Brien, assistant director and curator of exhibitions for the SFO Museum, who worked on the Milk exhibits. "The inglenook area is remaining, so we are excited to have two permanent Milk collections."

O'Brien was referring to what is known as the Central Inglenook, a permanent exhibit in the pre-security area of Harvey Milk Terminal 1 that features 43 images from stages of the gay icon's life. Other than several pieces of artwork inspired by Milk that are to be installed in the terminal in late 2023, the inglenook was expected to be the sole exhibit about Milk's history to remain in the terminal.
Readers following the SFO Milk terminal saga know that this latest news of the decision to continue exhibiting the large photo walls marks a turnaround of sorts for SFO officials, and their embrace of the project.

This wasn't always the case.

In 2019, we reported on the skirmish over what were then the latest designs for signage for the terminal. That capped six years of a protracted campaign, beginning when airport officials fought initial attempts to name the entire airport after Milk and ending with the compromise effort to designate one of its four terminals to honor him. (Gay former supervisor David Campos deserves credit for coming up with the idea to name the airport after Milk and then agreeing to the compromise.) The mayoral-appointed airport commission went so far as adopting its own policy for how to name areas of the bayside facility in reaction to the Milk naming proposal. Then when exterior signage was proposed, critics contended that greater prominence was given to "Terminal 1" than to Milk's name. That prompted District 9 Supervisor Hillary Ronen to introduce an ordinance that forced flipping the signage sizes, with "Harvey Milk Terminal" in capital lettering in a larger font and above the lettering for "Terminal 1." Still not satisfied after seeing revisions from airport officials, Ronen amended her ordinance to require the airport to use Milk's name on all signs for Terminal 1 both inside and outside the facility. At one point in 2019, Campos told a supervisors' committee that he had apologized to Milk's family. Stuart Milk, Harvey's gay nephew, said at the time that no one from SFO had ever even reached out to him, his family, or the foundation they created in Milk's name. SFO director Ivar C. Satero came under heavy criticism from LGBTQ advocates over the entire situation, which seemed focused on minimizing Milk's name and contributions.

That's certainly not the situation now. As Satero stated, "Harvey Milk Terminal 1 honors the legacy of a pioneering civil rights leader. Our goal in this facility is to illuminate, educate, and inspire action at a time in our history when we need to be clear and outspoken about human rights — as Harvey was for the LGBTQ community — but also for all communities of color."

And, as the museum's O'Brien noted, with the new installation, the size of the signage has become a secondary issue. "When you step off the plane and you enter that customs corridor there will be no mistaking where you are," he said. "It probably will indicate more than any sign can to see those images."

We couldn't agree more. The exhibit will serve as an affirmative statement of San Francisco values to travelers from around the world arriving at SFO's Harvey Milk Terminal 1; they will see the story of an LGBTQ rights pioneer who has been an inspiration to so many.

SFO blasted for handling of Milk terminal signs
Sign up!