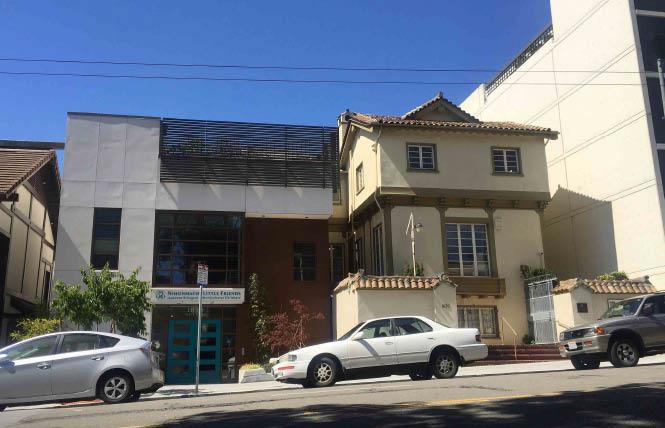 The Japanese YWCA/Issei Women's Building is located in San Francisco's Japantown. Photo: Courtesy the California Department of Parks and Recreation

A Japantown site has become only the second local historic property related to San Francisco's Japanese community and the fifth having to do with the LGBTQ community to be recognized as a city landmark. It is also the first property tied to the city's Japanese American community to be designated a city, state and national landmark.

The Board of Supervisors voted 11-0 Tuesday, April 13, in support of landmarking the Japanese YWCA/Issei Women's Building at 1830 Sutter Street. It will need to vote a second time at its April 20 meeting to finalize the city landmark ordinance, which was co-sponsored by Supervisors Dean Preston, who represents Japantown, Aaron Peskin, Connie Chan, and Rafael Mandelman, the board's lone LGBTQ member.

The decision had been expected as the supervisors' land use and transportation committee had unanimously backed the landmark request at its April 5 meeting. And the city's historic preservation commission endorsed granting it local landmark status in November, months after the property was officially listed on the National Register of Historic Places.

"I do want to emphasis how much of our city's history has found a home in this very special place," Preston, vice chair of the land use panel, said last week.

Twenty-five years ago the local Japanese community began the effort to landmark and preserve the historic structure, noted Karen Kai, a member of the Issei Women's Legacy Project. In doing so they helped unearth a remarkable history that intersects with numerous communities and movements.

"It has broadened our Japanese American community's understanding of the depth that goes with the history that has occurred within our community itself," said Kai during the committee hearing.

The Japantown Y site was where the pioneering gay rights group the Mattachine Society hosted its first convention in May 1954, according to the city's LGBTQ historic context statement. Bayard Rustin, the late gay African American civil rights leader, also taught a course at the site, as noted in the paperwork submitted for listing on the National Register.

(While visiting Pasadena, California January 31, 1953 as part of his lecture tour on the topics of anti-colonial struggles in West Africa, Rustin was arrested after being discovered having sex with two men in a parked car and forced to register as a sex offender. Governor Gavin Newsom posthumously pardoned Rustin in 2020.)

Independent genderqueer historian Devlyn Camp, whose podcast "Mattachine: A Queer Serial" has explored that period of LGBTQ history, told the Bay Area Reporter that preserving the Japantown Y site represents what the LGBTQ community's collective movement for liberation has become.

"It's fabulous to hear that the city, state, and nation are taking steps to preserve a landmark known for so many cultural efforts for liberation. The site one of our country's first gatherings of gay people organizing for queer liberation — at a location already known for efforts toward equality by Asian women of color and gay civil rights activist Bayard Rustin — is the perfect symbol of intersectionality," noted Camp, whose third and final season of their podcast premiered this week, as the B.A.R.'s LGBTQ Agenda column noted Tuesday.

The owner of the Japantown site, the Nihonmachi Little Friends, has sought city landmark status for it since 2013. Cathy Inamasu, executive director of the child care center, told the historic preservation commission that when it became owners of the building in 2002 as part of an out-of-court settlement with the Y, it pledged to maintain the structure's architectural integrity.

The Japantown building's listing in the California Register of Historical Resources provides some protections to the two-story-over-basement, wood frame structure. Its designation as a city landmark will provide it with even greater protection from seeing its exterior facade from being altered or the building being demolished should it ever change ownership.

A website and film are now in the works to tell the story of 1830 Sutter Street.

Mandelman is now seeking to landmark the house at 651 Duncan Street in the city's Noe Valley neighborhood where the late lesbian pioneering couple Phyllis Lyon and Del Martin lived. The supervisors land use committee is expected to vote on it at its April 26 meeting.

Web Extra: For more queer political news, be sure to check http://www.ebar.com Monday mornings for Political Notes, the notebook's online companion. This week's column reported on plans for new exhibits about Harvey Milk at the San Francisco International Airport terminal named in his honor.