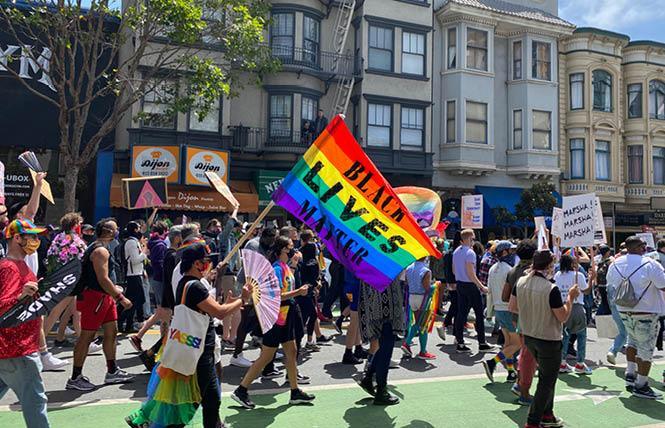 There may not be an official San Francisco Pride parade this year due to the pandemic, but that's not stopping another group from moving forward with its second protest march.

Meanwhile, Prides in Sonoma County, San Diego, and Portland are going ahead with some in-person events as the clock ticks for other LGBTQ civic celebration organizers to determine their 2021 plans. For the second year in a row the COVID pandemic has upturned the annual Pride season, with most events held between June and September.

San Francisco Pride, of course, announced March 24 that it will proceed with some smaller in-person events, with neither the Market Street parade nor Civic Center Plaza celebration slated to take place the last weekend of June.

2020 brought a new addition to the city's Pride events, unaffiliated with the San Francisco LGBT Pride Celebration Committee — the People's March and Rally down Polk Street to City Hall. It followed the route of the first "gay-in" in 1970 that grew to become the official San Francisco Pride parade.

Organizers of that event, such as Alex U. Inn, indicated at the time it would be an annual event. Inn stated to the Bay Area Reporter April 6 that the event will indeed take place Sunday, June 27.

"We are hoping that it will start at the original Polk Street location like we did last year, but with Governor [Gavin] Newsom announcing today that California will be 100% back on June 15, it might disrupt some of our planning because that means we may not end up at the Civic Center but straight to the Castro," Inn stated.

Juanita MORE!, who also facilitates the event, did not respond to a request for comment.

Inn was referring to news April 6 that California tentatively plans to lift most COVID-19 restrictions (though not the mask mandate) June 15 — in the middle of LGBTQ Pride Month. That comes as organizations throughout the state, and up and down the West Coast, are cautiously rolling out their plans to mark this year's festivities after last year's were forced into virtual space due to the pandemic.

The B.A.R. has contacted 12 other organizations that host Pride and Pride-related events on the West Coast and has heard from five.

On March 30, Sonoma County LGBT Pride announced "a monthlong series of COVID-19 aware micro-events in varied venues throughout Sonoma County." More information about the nature and timing of these events will be decided this week, Christopher Kren-Mora, the president of Sonoma Pride, told the B.A.R.

"We have two big meetings tomorrow, which we are hoping to get our final answer on two of the events," Kren-Mora wrote in an April 6 email.

This year's theme is "Beyond the Rainbow: Surviving, Reviving, and Thriving," which is inspired by the classic film, "The Wizard of Oz." Cheryl Kabanuck, the secretary for Sonoma Pride, stated in a news release that the events will put "the beloved film's lessons into perspective."

"There's no place like home being back together with our community," Kabanuck stated. "Courage leads us here, knowledge is how we survive, and heart is what keeps us together."

San Diego Pride also announced March 30 that while "there is still no certain path to safely produce Pride events at the same immense scale we did prior to the pandemic," there will be a main virtual event July 17 and a series of in-person "satellite" events.

"The details such as time, location, capacity, and entertainment content for Pride 2021's limited-capacity in-person events will be announced the first week of June," a San Diego Pride news release states. "If public health guidance allows, capacity at these events may increase as the date of each event approaches."

Fernando López, executive director of San Diego Pride, said they're grateful to volunteers, donors, staff, board members, merchants, and officials in the area who stepped in to lend their support.

"It is each of them, each of you, who lifts up our community and makes Pride possible. Your individual strength, brilliantly diverse creativity, and unstoppable drive keep our community and our movement resilient," López, who is queer and nonbinary, stated in the release. "While I know that this year's Pride events may again look different, next year's Pride will be a massive unforgettable celebration."

Pride Northwest in Portland, Oregon told the B.A.R. in February that it was looking at a hybrid strategy. Debra Porta, the executive director of Pride Northwest, stated to the B.A.R. March 30 that the organization has decided to move forward with that.

"We will be filming a virtual parade in early June and broadcasting on June 20 (which would have been our typical parade day this year)," Porta wrote in an email. "The June 20 parade broadcast will also include pre-recorded local performances and other commentary, building out to a two-hour (give or take) 'show.' ... Local CBS affiliate KOIN will also be broadcasting a half hour (maybe longer) celebration of Pride on 'regular' television. It will be the weekend of June 19-20, but still TBA for details."

Pride Northwest will also include other activities.

"We are collaborating with the Portland Queer Documentary Festival folks for a two-day film festival. This will be an in-person, safely spaced, ticketed event on June 16-17," Porta wrote. "The Portland Gay Men's Chorus' 2021 virtual Pride Concert will be part of Pride Northwest programming, scheduled for the evening of June 18.

"The premiere of film and original music (written by openly trans composer Mari Esabel Valverde) coming from the Resonance Ensemble will be part of Pride Northwest programming, scheduled for June 19. Time TBA," Porta continued. "The LGBTQ+ mural is still scheduled to be ready to unveil in late June/early July. We will be looking at fall for a potential street fair celebration for that."

As the B.A.R. reported February 10, Seattle Pride announced it was "hopeful that we will be able to host a smaller scale in-person event for Seattle's LGBTQIA+ community in the fall," in addition to its virtual events the weekend of June 26 and 27. When reached for comment, Seattle Pride told the B.A.R. to expect further announcements this summer.

David Heitstuman, a gay man who is the executive director of the Sacramento LGBT Center, which produces the capital city's Pride events, had told the B.A.R. in February that an in-person event there is unlikely this year. As of March 31, that holds.

"Our position hasn't changed," Heitstuman stated. "We are monitoring guidance closely and will make an announcement about our plans sometime later in April."

Christopher Street West/Los Angeles Pride had announced in February that it was currently developing "a variety of programming that will be announced soon." CSW/LA Pride spokesman Chris Prouty told the B.A.R. subsequently "there likely won't be any details announced before mid-April, unfortunately."

Santa Cruz Pride, which did not respond to a request for comment, states on its website that Pride there will occur June 6 at 11 a.m. (though it is unclear, as per the announcement, whether that will be virtual only or in-person).

"Will be a blast," the chyron states. "Be a part of making it happen!"