Editorial: B.A.R. looks back at its proud history 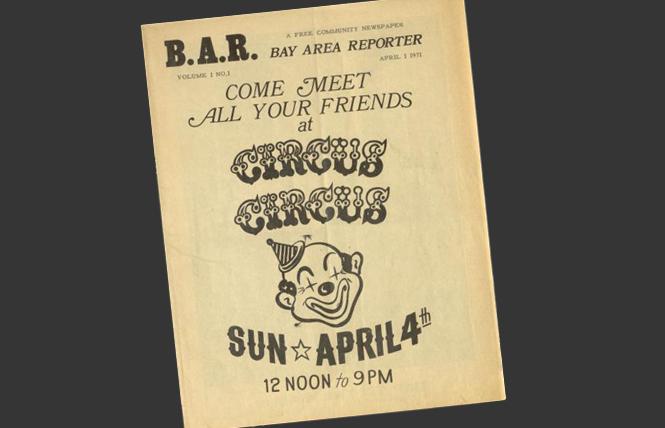 The cover of the first issue of the Bay Area Reporter. Photo: Courtesy B.A.R. Archive

Yeah, we'll toot our own horn. We've come a long way from when the first issue of the Bay Area Reporter rolled off the presses (or a mimeograph machine in the back of a gay bar) 50 years ago — April 1, 1971. It was no April Fools' joke. The paper had a purpose — to bring the LGBTQ community together, at least as far as letting us all know what was going on — and we continue to fulfill that promise. It hasn't always been easy. It definitely hasn't been without controversy or occasional missteps. But here we are, 50 years later, in the midst of another pandemic, continuing to inform queer readers on issues that matter to them.

Looking back at those early issues, it's easy to see that the paper got its start in the gay community. There was no LGBTQ acronym then, and the paper's early coverage certainly skewed heavily toward the drag community. (An early reader even wrote a letter to the editor suggesting the paper change its name to Bay Area Drag Reporter.) But very quickly, by the fifth issue, the B.A.R. shifted to news coverage in addition to its gossip columns and horoscopes. From the beginning, the paper engaged with City Hall, promoting friendly straight politicians and urging readers to vote for them. In the sixth issue, the cover featured a demonstration outside the San Francisco federal building. "Gays Demand Equal Rights," read a sign held by one protester. You might think it quaint today, but this is the early 1970s we're talking about, when anti-gay harassment ran rampant. It was only two years after the 1969 Stonewall riots in New York City, and while LGBTQs were certainly more visible — and vocal — following that seminal event, it still wasn't easy being queer in the U.S.

Founding publishers Bob Ross and Paul Bentley were on to something. In the years that followed, with no internet or social media, readers quickly became aware that the best place to alert others to your news was in the pages of the B.A.R. Eventually, Ross bought out Bentley's share and became the sole publisher, a position he held until his death in 2003. During the Ross years, the B.A.R. covered uncomfortable issues in the community like racism in Castro bars, where gays of color, particularly Asians at the time, were often denied entrance or had to show multiple forms of identification. This wasn't an isolated case, as recently as 2004, under publisher Thomas E. Horn, the paper extensively covered racial bias at Badlands. While owner Les Natali has always denied the accusations that the establishment wasn't welcoming to Blacks, he ultimately reached a confidential settlement with activists who had kept the issue alive for years.

On AIDS, the paper covered the epidemic beginning soon after the U.S. Centers for Disease Control and Prevention bulletin about five cases of Pneumocystis pneumonia (PCP) among young gay men in Los Angeles in June 1981. As Liz Highleyman recounts in her history of our coverage, the paper frequently announced public meetings, activists' efforts to promote safer sex, and other activities as scientists and researchers struggled to understand this new virus. There was vigorous disagreement in the community over mandatory bathhouse closures, and the paper came under fire over its then-editorial stance, which was wrong. Despite that however, the B.A.R. quickly backed public health recommendations and has consistently written about all facets of the epidemic.

Our coverage has expanded as the community evolved. The B.A.R. focused on issues faced by transgender people when many readers were not aware of them. From heinous cases like the murder of trans teen Gwen Araujo in Alameda County in 2002 to tragic cases of violence that led to the homicide of Taja Gabrielle de Jesus, a trans woman who lived in San Francisco's Bayview neighborhood, we have shined a light on this epidemic of violence and hate that continues to target the community.

In more positive news, we have covered trans people who have worked to uplift the community and take powerful positions in local government. A decade after she was elected the country's first out trans trial court judge, Victoria Kolakowski, in Alameda County, is still the only one in California. That speaks volumes to the challenges trans political candidates face, something that's exacerbated now with the right-wing's obsession with trans girls in sports and a number of state legislatures working overtime to deny them equal rights.

LGBTQ candidates have made terrific gains since the late Harvey Milk, a onetime columnist for the B.A.R., became the first openly gay person elected to office in San Francisco and California. In recent years, voters in cities and municipalities outside urban centers like San Francisco have said yes to an increasing number of LGBTQ and nonbinary politicians who use their platforms to fight for equality.

It has been hard for the B.A.R. to shake its early reputation as a paper catering to the gay male community, specifically, gay white men. But perusing our archives, as we've done in preparation for this milestone anniversary, it's a misperception more than reality — possibly conjured up by competing publications over the years. Although we've long covered lesbian women, some of the people we spoke to for this anniversary do point out that women sometimes didn't see themselves in the paper. We've always worked hard to rectify that, and continue to do. We want the entire LGBTQ community to feel represented in the news and arts coverage and we are committed to that goal.

We'd be remiss if we did not take a moment to thank our advertisers and donors. They're the ones that really keep the paper going — and let it remain a free publication. Companies, small businesses, and nonprofits alike have bought space in the paper because they know they will reach an active and engaged audience. And to ensure we'll be around, we're always adopting new technologies and changing with the times to deliver the news to readers in the formats they prefer.

The LGBTQ community is not a monolith. We represent a variety of political and social views — everything from lesbian feminists to gay schoolteachers to drag artists to leather daddies to, gulp, conservatives and everything in between. The paper's not perfect by any stretch, but we strive to be for the benefit of our LGBTQ community. Our lives have certainly changed for the better since 1971, but discrimination is still with us. Equality has not been achieved yet, and we're committed to documenting our journey to true freedom.