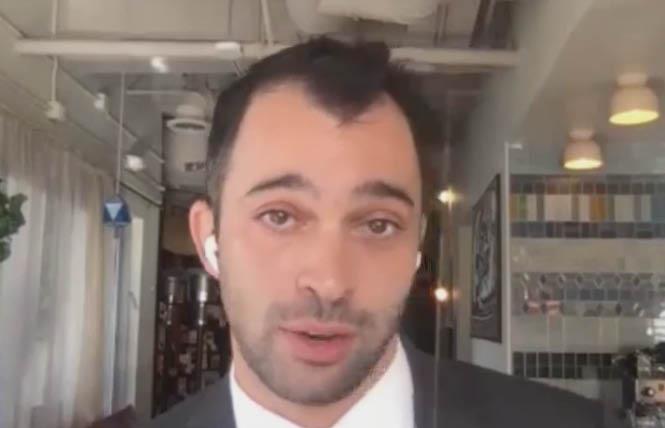 Manny Yekutiel spoke to the Board of Supervisors rules committee Monday, December 14. Photo: Screengrab via SFGovTV.

A gay small business owner is one step closer to a seat on the powerful San Francisco Municipal Transportation Agency's board after a hearing Monday by the Board of Supervisors rules committee.

Emanuel "Manny" Yekutiel's nomination was approved 3-0 during the December 14 remote hearing. The committee also unanimously recommended disability rights advocate Fiona Hinze to another seat on the SFMTA board. Mayor London Breed nominated both Yekutiel and Hinze.

Yekutiel owns the eponymously named cafe and event space at 16th and Valencia streets in the Mission district. He currently serves on the San Francisco Small Business Commission, a seat he will resign if approved for the SFMTA board.

Yekutiel would be the only LGBTQ member of SFMTA's board. Art Torres, a gay man who is the former chair of the California Democratic Party, previously served on the panel. The supervisors rejected the nomination of Jane Natoli, a trans woman, earlier this year, setting up Breed's second attempt to name an LGBTQ person to the oversight panel.

SFMTA is a city department that's responsible for all ground transportation. It has oversight of Muni, as well as bicycling, paratransit, parking, traffic, walking, and taxis. It is led by Jeffrey Tumlin, a gay man hired by Breed a year ago.

District 9 Supervisor Hillary Ronen, who represents the district where Manny's is located, praised him and Hinze during the hearing, as did rules committee members Supervisors Catherine Stefani (D2) and Gordon Mar (D4).

During his remarks, Yekutiel spoke about the importance of having a brick and mortar small business owner on the transit board, and noted he would be the first.

"SFMTA has a unique ability to save small businesses," he said, noting that thousands in the city have been lost during the COVID-19 pandemic.

Other strengths Yekutiel pointed to include that he's an organizer and community-builder and that in his role at Manny's he's worked to connect people to politics. The event space hosted a bevy of politicians, including presidential candidates, before the pandemic hit. Since then, it has held virtual events.

In a preemptive move, Yekutiel also told the committee that he's met with union leaders, something that Natoli hadn't been able to do by the time of her hearing. Ronen noted that she received texts from members of the San Francisco Labor Council and the Transit Workers Union in support of Yekutiel.

In regard to how the pandemic has affected public transportation, Yekutiel said that as SFMTA recovers people need to be informed that they can ride the bus or take the underground when it reopens.

"Vaccines will help, reopening downtown will help," he said when asked what needs to change for people to return to transit.

Shortly after the shelter-in-place order went into effect in mid-March, SFMTA closed the Muni Metro underground and dramatically reduced bus lines. Only 17 of the system's 89 bus lines are operating.

Ronen also asked Yekutiel, who is Jewish, how he would represent the Latinx community.

"I'm not Latino," he said. "But as a Mission small business owner I went through a yearlong process of conversations" with Latinos and others in the area.

"I will say my advocacy for small business has had an impact on essential workers," he added. "I've had to go through the gauntlet, as most people know."

When Manny's first opened it was subject to protests by Palestinian supporters in the fall of 2018. Yekutiel has also faced complaints that he's helped gentrify the Latino neighborhood. Over the weekend, Manny's was vandalized with a broken window and some items were stolen, according to a message Yekutiel posted on Facebook.

During public comment at the hearing, Ben Bleiman, president of the San Francisco Entertainment Commission, said that Manny's was "the victim of harsh anti-Semitism."

Yekutiel talked about the importance of SFMTA soliciting input from small business owners before it begins significant projects. And he noted how the Shared Spaces and Slow Streets programs implemented during the pandemic have largely helped local merchants.

Mar brought up the closure of the Great Highway to vehicles, and said that he expected such programs to transition once the pandemic eases.

"In general, opening streets has inspired civic pride," Yekutiel said. "At the same time, it has caused consternation for some."

Stefani said that she was "absolutely thrilled" with Yekutiel's nomination.

"You're kind and you're willing to listen to others," she noted. "I think you seek unity.

Hinze nomination
Hinze, who lives with cerebral palsy and uses an electric wheelchair, also impressed the committee. She lives in the outer Richmond and primarily relies on paratransit to get around. She's been active in Vision Zero, the city's plan to reduce traffic deaths and called for more public education around pedestrian safety.

She told the committee that there are concerns with Shared Spaces and Slow Streets in how the programs affect the right-of-way and keeping streets and sidewalks accessible for those with wheelchairs, walkers, canes, and scooters.

"Equity is the key to all areas of SFMTA," Hinze said, adding that communication is vital and can be improved at the transit agency. She also said she would work to make sure SFMTA is held accountable to the public.

"Outreach would be a priority of mine. These large capital projects have been in the news for not running on time," she added, referring to the long-delayed Central Subway.

All of the speakers during public comment supported Yekutiel, Hinze, or both. In fact, Ronen remarked at the end that there was not a single negative comment.

Martin Rawlings-Fein, a transgender bisexual married father, said that both the nominees are "great picks."

Jupiter Peralta, a Noe Valley resident, said that Yekutiel is a "great employer" and has "created a blue print for organizing."

Sharky Laguana, president of the Small Business Commission, said he supported both candidates.

The full board is expected to take up the nominations soon.