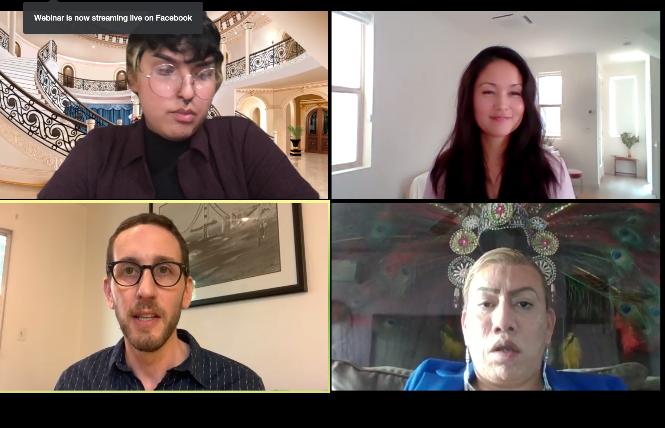 Transgender incarcerated individuals and advocates are urging California Governor Gavin Newsom to sign into law legislation that would allow transgender inmates to be housed with others of the same gender.

After several years of debate on changing state prison rules that require transgender inmates to be housed based on the sex they were assigned at birth, legislators this summer sent Newsom Senate Bill 132, the Transgender Respect, Agency and Dignity Act authored by gay state Senator Scott Wiener (D-San Francisco). He has until September 30 to sign it, and the bill would go into effect January 1.

The state's Department of Corrections and Rehabilitation would be required to house incarcerated transgender individuals based on the gender identity of their choice. Thus female trans inmates, currently housed in male prisons, could choose to be placed in female prisons.

Michelle Calvin, a transgender woman imprisoned at Mule Creek State Prison, called into a Zoom news conference Tuesday organized by Wiener's office to give voice to why seeing the bill become law is imperative.

"It means a lot for me and my sisters. I have been here 15 years and I have been abused and been disrespected by staff not addressing me for who I am because I am a woman. I am so excited," said Calvin, who was part of the coalition that has been working on the legislation.

Calvin, who had to phone back into the press conference after her initial call was dropped, expressed optimism that Newsom will sign the bill.

"I am so happy and honored to have this done. I want to thank the governor; I know ... feel in my heart he is going to sign it," said Calvin. "It is time for change. It is truly time for change."

Fancy Lipsey, a transgender woman also housed at the prison facility in the Amador County city of Ione, also urged Newsom to enact the policy change so that she and other transgender incarcerated people can access the services they need to prepare for when they are released back into society.

"I know he will, he is very understanding, and I know he will sign it into law," said Lipsey. "I am excited to be in an environment that fits my gender identity. It gives me the opportunity to be the woman I know I can be."

As state prison officials have worked with Wiener and LGBTQ advocates on it, Newsom is expected to enact the legislation. Wiener said Tuesday he is "cautiously optimistic the governor will sign it."

"We know trans people in prison are at a much higher risk of being victims of violence in the population as a whole, including sexual violence," noted Wiener. "SB 132 assures trans people in prison are treated with the respect and dignity they deserve as human beings, and that includes being addressed with their actual name and requested pronouns."

Several other states have already put in place policies that require transgender inmates to be housed in gender appropriate prison facilities. Connecticut was the first to do so with the passage of a bill in 2018; Massachusetts also enacted policy changes that year after being sued by a transgender female inmate.

Bamby Salcedo, president and CEO of the TransLatin@ Coalition, said she wished such a policy was in place during the 14 years she was incarcerated in California's prison system. She was sexually assaulted and was subjected to violent behavior from both other inmates and correctional officers, she said.

"This is historic because it will save many lives," said Salcedo. "Although we want for us to obviously get liberation for all people who are incarcerated, we know people will continue to be incarcerated. We also know many trans people are also doing life sentences; they deserve to have some type of dignity and agency during their life sentences."

Once implemented, it could take anywhere from 30 to 90 days for California prison officials to approve a transgender inmate's request to be rehoused, advocates noted. They also stressed the need for transgender incarcerated people to report back on if prison staff are not adhering to the legislation.

"I think this bill is going to go a long way; it is forthcoming. It will keep a lot of transgenders in CDCR safe," predicted Jasmine Jones, a legal assistant with the Transgender Gender-variant and Intersex Justice Project. "I think the bulk of them will sleep well at night knowing they are safe and well-protected under this law."