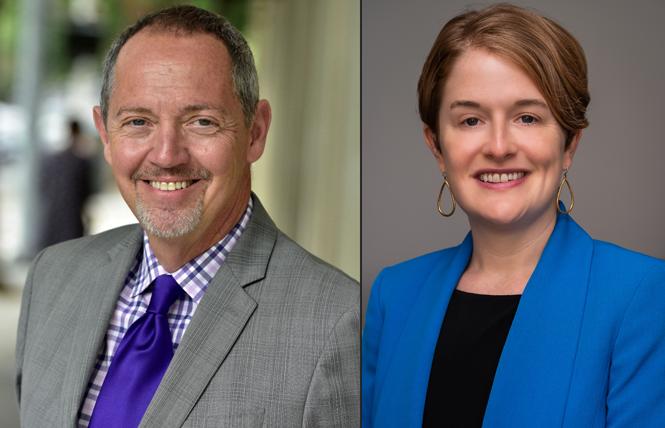 The two out directors on the board of the regional BART transit agency whose terms expire this year are riding an easy path to reelection on the November 3 ballot.

Bevan Dufty, a gay dad and former San Francisco supervisor who was elected four years ago to the BART board's District 9 seat, is facing off against two little known challengers — Patrick Mortiere and David Wei Wen Young — and gay activist Michael Petrelis, who also ran four years ago. Both of the city's main LGBTQ Democratic clubs, Alice B. Toklas and Harvey Milk, endorsed Dufty's bid for a second term, as did the San Francisco Democratic Party, on whose oversight body Dufty serves as an elected member.

Dufty told the Bay Area Reporter "it is fine" having to defend his seat this year. "Any politician would love to have a free ride. I, unlike José, have never gotten one."

He was referring to his close friend José Cisneros, the city's treasurer who has gone unchallenged in his last four races for reelection.

"And I am bitter," joked Dufty.

Petrelis told the B.A.R. he is mounting a "one-man campaign" and has pledged to run "a positive strategy with my fellow candidates." Among the various policies he would like to see BART institute are banning the transit agency's directors from accepting donations from police unions, reopening the rest rooms at all of its stations with employee attendants monitoring them, and requiring the agency's general manager to monthly meet with passengers at one of its stations.

"I am a lifelong LGBT bicyclist, have never learned to drive a car nor owned one. I ask for your vote," noted Petrelis.

As the B.A.R. noted in August, Rebecca Saltzman isn't being challenged for her District 3 BART board seat, which covers parts of Alameda and Contra Costa counties in the East Bay. The lesbian married mother of an infant lives in El Cerrito and there had been some speculation earlier in the year if she would seek a third term, having been first elected as a BART director in 2012.

But with the transit agency facing its biggest financial crisis in decades due to the plunge in ridership wrought by the novel coronavirus, Saltzman decided to continue serving on the board, where she has been a strong progressive voice the last eight years.

"My continued leadership will help ensure BART emerges from the current crises as a stronger and more equitable agency, better equipped to serve all riders," she stated in June in announcing her reelection campaign.

Both Saltzman and Dufty have pushed for the agency to build more affordable housing on the land it owns at its transit stations and most recently to reallocate $2 million toward hiring unarmed ambassadors to patrol the transit agency instead of police officers.

Moving forward, Saltzman told the B.A.R. that she believes BART will play a key role in reversing the economic impacts of the pandemic felt by cities and counties around the Bay Area. And she hoped that a policy change she helped fight for at BART would prove beneficial for LGBTQ-owned firms.

"One of the most important things BART can do to help the Bay Area recover economically from COVID-19 is to continue to provide service and to increase service as demand increases," stated Saltzman. "We have structured our budget and service plan this year to be flexible so that this will be possible. Pre-pandemic I led the board along with Director Dufty to pass a policy that adds LGBTQ ownership to the bidding preference given to qualified small businesses seeking work on BART contracts."

Dufty told the B.A.R. he is "excited to bring LGBT small businesses to the table," noting that the larger construction firms that BART has awarded contracts to "have been very supportive. This will be a major economic stimulus in the months ahead."

Working with Saltzman and the other progressive BART directors, Dufty pledged the board would continue to reexamine how the transit agency approaches policing the system and addressing the needs of riders who are homeless or dealing with mental health issues.

"People needing housing and treatment generally already have had a series of negative interactions with law enforcement and view armed officers as issuing citations, running warrant checks, and taking individuals to jail," Dufty told the B.A.R. "We have an opportunity to join local governments and agencies in reckoning with past practices and reimagining what public safety can be without reinforcing systemic racism and white supremacy."

The BART board's other out member, Janice Li, a queer transit advocate who also represents San Francisco, isn't up for reelection to her District 8 seat until 2022.