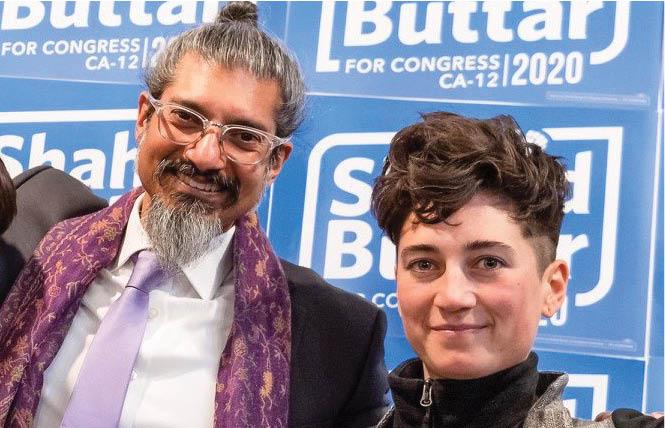 The former campaign manager for Shahid Buttar, the democratic socialist running against House Speaker Nancy Pelosi (D-San Francisco), is breaking her silence about what she describes as a "toxic workplace environment" and a candidate uninterested in winning election to Congress.

She spoke out ahead of an August 4 vote by the local chapter of the Democratic Socialists of America to rescind its endorsement of Buttar. Sources said it was a landslide. The SF Berniecrats are set to vote August 5 on rescinding its endorsement of the embattled candidate. Meanwhile, the progressive Harvey Milk LGBTQ Democratic Club is deciding this month on its endorsement in the November election, having endorsed none of the 12th House District candidates in the March primary race.

In a lengthy post on the website Medium Tuesday, Jasper Wilde goes into detail about why she decided to quit Buttar's campaign this spring. She was one of 13 former campaign staffers who left due to what they have contended was Buttar's misogynistic behavior toward his female employees, as the Bay Area Reporter first reported online July 21.

"Truly, I left the Shahid Buttar campaign because it was a toxic workplace environment in which personal and professional boundaries were repeatedly violated," wrote Wilde. "Personally, I was driven by a moral imperative to remove myself from a campaign, due to a candidate who was purposely misleading his staff, volunteers, donors, and voters."

Buttar, 45, has publicly denied the accusations in media interviews, social media, and in phone calls he has made in recent weeks to his campaign donors and volunteers. As he told the B.A.R. last month, the former campaign personnel were "not terribly loyal" to him and had been hostile to the campaign's volunteers.

He voiced similar critiques of the former staffers during a candidate interview with the Milk club's political action committee in late July when it interviewed him virtually along with a number of other candidates running in fall races who are seeking its endorsement. The allegations by his former campaign team came as a "surprise," said Buttar, who added he wanted "to particularly just apologize for the experiences that people might have had with me that landed in those terms."

Buttar added he was taking the allegations "very seriously" and had been talking to various people about how he had "shown up on the campaign team."

"And all I can say is that I'm eager to learn. And again, not proud of how I was experienced in that way," Buttar told the Milk club PAC. "We certainly had lots of challenging conversations on the team. We had very profound strategic differences."

Denies harassment accusation
Buttar also reiterated his assertion that there is no validity to the allegations made by actor and comic Elizabeth Croydon that he sexually harassed her when he lived in Washington, D.C. in the early 2000s.

"I know the harassment didn't happen and I feel secure in that because that's a truth that I would have had to have participated in," Buttar told the Milk club PAC.

Since Croydon went public with her allegations last month, a number of progressive activists in the D.C. area have claimed she has falsely accused others of sexual harassment. She has responded that their open letter is part of a smear campaign orchestrated by Buttar's campaign, which he denies.

A volunteer on Buttar's campaign has also complained that the former campaign staffers helped spread a false story in which the candidate demanded he be given her phone number in order to set her up with a male donor. The woman, who requested to remain anonymous, told the B.A.R. that in fact she had asked to be connected with the person as he was another volunteer and she wanted to assist him in putting up campaign signs around town.

"I don't want to discredit anyone else's story, but don't make me a part of it or use this fabricated story as a way to get other people to come forward with their own claims," said the woman in describing text messages she had sent to Patrick Cochran, the campaign's former volunteer coordinator. "It will only hurt the other claims that might be true."

She also shared the texts with the B.A.R. Cochran told the B.A.R. this week that he initially brought up the allegation during a DSA meeting due to believing it to be true and having relevance in light of Croydon's coming forward. He had contacted the female volunteer to ask her directly about it but didn't hear back for several days and when she denied the story, he said it was not included in the formal resolution requesting that the DSA chapter rescind its endorsement.

But the story began circulating, and several of the former staffers told the B.A.R. the incident raises concerns about how volunteers' contact information was handled. And a copy of the DSA resolution posted online claims that Buttar "has exhibited a pattern of abuse including but not limited to sexual inappropriate behavior with his staff and volunteers."

When the B.A.R. first contacted Wilde last month, she declined to comment because she had signed a contract that included a non-disparagement clause. Since then the NDA clause has been terminated.

In interviews with the press last month, Buttar had said his campaign did not use NDAs, and when asked about it by the Milk club PAC, he said none currently do. He acknowledged that Wilde's contract included one but insisted it was meant to prevent the disclosure of supporters' private information and not to bar Wilde from discussing her own experience working on the campaign.

Wilde, 30, a genderqueer person who uses female pronouns, told the B.A.R. she decided to break her silence in order to address progressives outside of San Francisco whom she feels have been too quick to dismiss the allegations raised about Buttar.

"I wanted to release this statement because I felt like I had the moral responsibility to say something. I see that San Francisco progressives are quickly turning away from him, but I am not seeing the same thing happen with the online progressive community," said Wilde, who has been hired to help manage the campaigns of two local ballot measures that District 6 Supervisor Matt Haney sponsored. "I think it is important for us as leftists to be clear about what we do and don't accept in our movement. We should not accept Shahid Buttar or his behavior."

In her Medium post Wilde noted that Buttar had sought her out last year to run his campaign, his second against Pelosi. He first ran against her in 2018 but failed to survive the primary.

She did so, wrote Wilde, thinking Buttar had the same electoral chances as other progressive candidates seen at first as long shots that went on to win like Congresswoman Alexandria Ocasio-Cortez of New York. Due to California using a jungle primary system where only the top two vote-getters go on to the general election, Buttar had been seen as being the first progressive candidate to mount a serious challenge against Pelosi since she first was elected.

Instead, Wilde wrote that she spent much of the time fighting with Buttar over strategy, messaging, fundraising, campaign tactics, and events. The result was "chaos on the campaign," she wrote.

"I found myself in a one-sided intimate relationship with a candidate who defined himself as vehemently against incumbent Nancy Pelosi, but who struggled to articulate a platform for himself," wrote Wilde. "Behind closed campaign doors, he didn't seem to be against the Democratic establishment any more so than he was against any other entity that he felt intimidated by."

And Wilde was critical of how Buttar has handled himself since the allegations became public more than two weeks ago.

"I never expected the campaign I poured my hopes and energy into would end due to allegations of sexual assault and media ploys intended to discredit me and others in order to try to save his campaign," wrote Wilde. "Instead of owning up to and addressing allegations head-on, Shahid has tried to escape responsibility for his actions by discrediting me, sexual harassment survivor Elizabeth Croydon, and anyone else who came forward with allegations or characterizations that don't fall in line with the image he projected."

Web Extra: For more queer political news, be sure to check http://www.ebar.com Monday mornings for Political Notes, the notebook's online companion. This week's column reported on an abortion rights group and a statewide LGBT advocacy organization endorsing a number of out candidates across California.

Updated, 8/5/20: This article has been updated to report on the local DSA chapter rescinding its endorsement of Buttar.