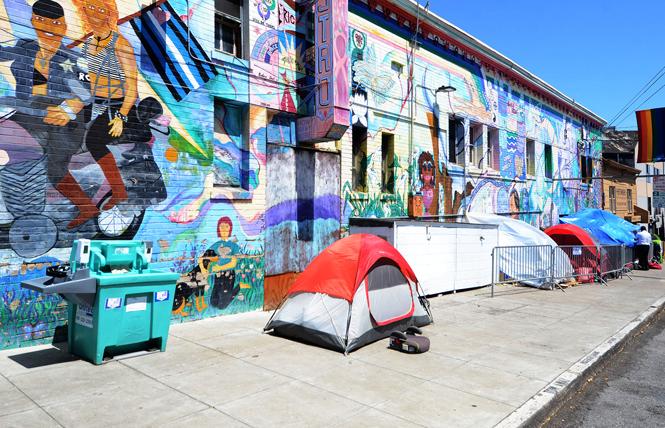 Tents and a hand-washing station sit along 16th Street near Market Street in the Castro district. Photo: Rick Gerharter

A new focal point in the controversy about how to house San Francisco's homeless population while the city shelters in place has erupted over plans to place a safe sleeping site at Everett Middle School.

Gay District 8 Supervisor Rafael Mandelman said that a site at the school, located at 450 Church Street, will help alleviate homeless encampments on Castro-area sidewalks, but some critics in his district are voicing opposition on the neighborhood social media website Nextdoor.

The city, in compliance with public health recommendations to help prevent the spread of the novel coronavirus, is not forcibly removing homeless encampments set up on streets.

"There have been tent encampments around the city — particularly in the Castro and upper Market, as well — since the start of the shutdown," Mandelman said in a phone interview with the Bay Area Reporter May 15. "There are many more people on the street now."

As the B.A.R. previously reported, there is an ongoing dispute between members of the Board of Supervisors and Mayor London Breed about the feasibility of sheltering homeless people in hotel rooms. While the board passed legislation requiring over 8,000 rooms be leased by April 26, that goal has not been met, and the mayor has cited logistical challenges as a reason.

On April 28, the Board of Supervisors passed Mandelman's resolution urging the creation of safe sleeping sites for homeless people in tents. The same day, the board of the San Francisco Unified School District allowed its properties to be used for these sites.

"It's not to say we shouldn't do hotels," Mandelman said. "I don't think that's going to completely solve the Castro's problem. We are going to have to have another approach."

The resolution states that recommendations from the U.S. Centers for Disease Control and Prevention be followed: the sites should be staffed; have restroom, washing, and bathroom facilities; and people should observe social distancing. Food and support services will be provided to make it easier for people to stay on the premises.

There are many proposals for safe sleeping sites in the city, but Everett is the only one in District 8, according to Mandelman.

Nextdoor posts reveal a mix of reactions to the proposal to put what Mandelman calls a safe sleeping village in District 8.

In response to a supportive post from Jared Goldfine, some upper Market and Noe Valley residents responded with worries that it will be used "as a base to harass" people living in the area, that the homeless "will never leave," and that the city will provide them with drugs and attendant paraphernalia.

In response to these concerns, Mandelman recently held a Zoom meeting with constituents.

"The opposition is mainly about how bad things have been for years and they're worried about more unhoused people congregating in the neighborhood," Mandelman said, adding that the government will not be "bringing people from across the city" to the sleep site, but will ask people already on the neighborhood streets to move there.

Details worked out
Mandelman said that he expected the site would have been approved by now, but although city staff have made plans, the city and school district have to complete a memorandum of understanding — or, a formal agreement — between the entities about the use of the space.

Mandelman told the B.A.R. May 20 that the city and school district have reached agreement.

"City has signed," Mandelman wrote in a text message. "I think they're still waiting on district signature, but I believe all issues have been resolved."

Mark Sanchez, a gay man who's the president of the Board of Education, told the B.A.R. May 18 that he is "pretty sure everything will be wrapped up by today." (As of the morning of May 19 Mandelman said that the district and the city were close to an agreement but had not reached one.)

"There were some sticky points around certain items we had to be aware about — because of federal and state law — about drugs, alcohol, and vaping on school property," Sanchez said. "We wanted strong language in the memorandum of understanding that we will have those rules in place."

Sanchez said he is supportive of having a safe sleeping site at Everett, and if not there then "at other sites our district has control of."

Buena Vista Horace Mann School in the Mission district was housing homeless families of SFUSD students even before the novel coronavirus outbreak.

According to the San Francisco Examiner, 59 families (or, almost 200 individuals) were served between November 2018 and September 2019.

The first operating safe sleeping village is between the Asian Art Museum and the San Francisco Public Library in the Civic Center area, where there are 90 tents.

The second started as an unofficial site, at Martin Luther King Jr. Park in the Bayview, but recently received city approval.

A third, announced May 15 by District 5 Supervisor Dean Preston, will be at Stanyan and Haight streets where there was once a McDonald's.