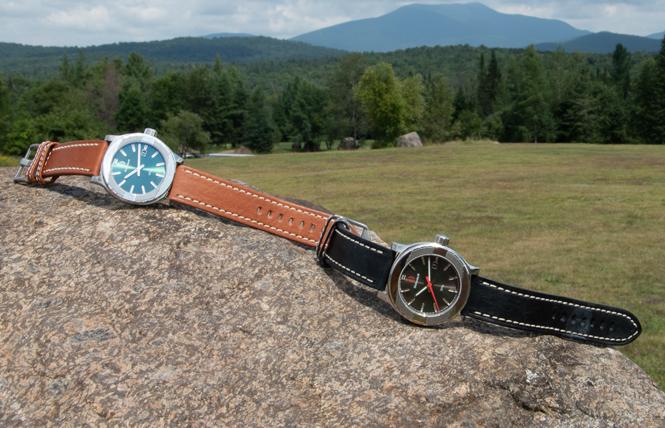 The yearly holiday shopping season between Thanksgiving and Christmas is peak sales time for a gay watch designer and a queer-owned candle business that also sells a line of "unmentionables."

For James Reeves, the creator and founder of Diefendorff watches, the four-week period in late November through late December is critical. His watches, which he started selling online in October 2018, retail for $749 or $799 depending on the model and are popular gifts this time of year.

"For every kind of retailer it is absolutely essential," Reeves, who is now based out of Chicago, said about the Christmas shopping season in a recent phone interview. "There are great opportunities with it. People are looking to buy products that have a significant price tag for most people at the holidays."

This year he is running a sale through December 31 where everything on his online store at https://diefendorffwatches.com/ is 20.19% off. In addition, each purchase comes with a free watchstrap changing device, called a Spring Bar tool.

"My experience last year was Black Friday and Cyber Monday for strictly online retailers wasn't as make-or-break as it is often made out to be. Certainly web traffic did increase," said Reeves. "But I found more success after Cyber Monday and leading up to the holidays."

Boy Smells co-founders and life partners Matthew Herman and David Kien, who are both queer, told the Bay Area Reporter in a recent phone interview that the fourth quarter of the year accounts for 40% of their yearly sales. Customers can still order their special holiday candle collections on the company's website at https://boysmells.com/, but retailers who wanted to stock it in their own stores needed to place their orders by the end of the summer.

"Our product is doing phenomenal in San Francisco," said Kien. "We are in quite a few retailers there."

Despite the name of their company, which they launched out of their Los Angeles home in 2016, and candle scents like Cedar Stack or Ash ($34), women account for 75% of their business. They are known for the pink boxes their candles come in.

"The brand itself is about harnessing both sides of the binary and representing the full spectrum of possibilities," said Herman.

A revolutionary name
Reeves named his company after a distant relative, Captain Henry Diefendorff, who fought in the Revolutionary War and died on the morning of August 6, 1777, after being ambushed in the woods of Oriskany, New York. Two hundred years later to the day Reeves was born as Diefendorff's sixth great-grandson.

"I was thinking about creating this company and happened to stumble across his story from http://www.Ancestry.com," said Reeves, 42, who grew up outside of New York City. "He was the son of Swiss immigrants. How could I not name the company after him?"

His watches use a Swiss-made movement and are assembled in Ohio with leather straps made in Florida. They ship in packaging made in upstate New York.

"It is a global watch," said Reeves, noting that there are 17 big lines and 76 small lines on the front and side of the watch in honor of the year the colonies declared their independence from Great Britain.

He named his debut Cornelius Collection of watches after Cornelius Vancamp, a 17-year-old recruited by Diefendorff who married his daughter. Reeves cemented his idea to design his own watch after meeting a man in a bar at a West Coast airport and asking him about the timepiece he was wearing.

"He told me it was a gift from his husband for their wedding. He got choked up," recalled Reeves, who is currently single. "I knew watches were a way to celebrate a milestone. It means something more than just what time is it."

From a young age watches and clocks fascinated him, recalled Reeves. He liked that a watch was a finishing touch to one's outfit and a way to express one's self. Creating a line of watches and finding suppliers willing to work with a boutique company, though, proved challenging.

"It was a puzzle I enjoyed figuring out," said Reeves, who for the last decade has worked as a consultant on corporate sustainability and social responsibility.

For now, he plans to remain as an online-based watch seller. He mainly promotes his company via social media platforms. Shipping is free for U.S. customers, but not for those overseas and in Canada.

"For sure it is largely an American audience, in part because of that story. I have had some interest in the U.K., which I find ironic," said Reeves. 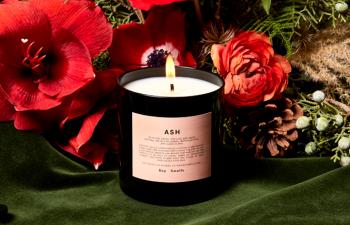 A flicker of an idea
On one of their first dates five years ago Herman, 39, and Kien, 34, talked about wanting to open their own store someday. Both worked in the fashion industry and weren't very impressed by the shops found in most gay neighborhoods.

A few years later Kien, who grew up in Garden Grove, California, suggested they try their hand at candle making, thinking it would be a way to relax from their high-stress, long-hour careers.

"There are a lot of fires to put out in fashion production and then I go and create my own fire with candles," he joked. "It is a lot harder than you think. There is a lot of experimenting with ratios of wax and wick and the vessels they come in."

Herman, who is from Austin, Texas, helped select the fragrance profiles, as he wears lots of colognes and likes to burn candles. He likened the process to a "weird" comingling of designing and cooking.

"You have a palette of options and what you do with them makes something amazing," he said. "To me designing a fragrance or a gown is not totally different. It is about a balance of different things and the story you are trying to tell."

They started off by gifting their candles to friends and contacts in the fashion industry. From there the company grew and attracted the notice of other retailers who wanted to carry their product, such as the ZGO store in San Francisco's LGBT Castro district.

"It happened pretty organically up until last year when we hired a real director of sales," said Herman.

They finally moved out of their home to a proper business location last year and now employ 11 people. In 2020 they plan to open their first pop-up stores in certain neighborhoods, such as the Castro, and in 2021 aim to have their own flagship retail location on the West Coast.

Next fall they intend to introduce a non-gender specific perfume. They already are selling a line of underwear in both men's and women's styles that are all made of the exact same colors and fabrics.

"So you can mix and match between genders if you are transitioning," noted Herman.

They don't ship overseas at the moment but are carried by several London retailers, such as Selfridges. San Francisco is their fifth most popular destination for online orders.

"It's been a wild ride. No regrets but a lot of sleepless nights," said Herman. "Nothing beats working for yourself and believing in what you are doing." 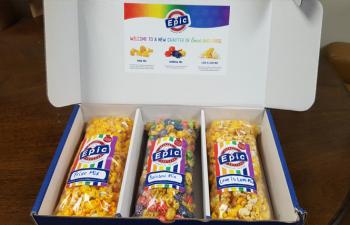 Popping the closet
A gay-owned popcorn company with a flagship store in Dyer, Indiana is selling a specialty box of popped kernels aimed at celebrating an LGBT person who has recently come out of the closet or is marking a coming out anniversary. The Coming Out Box ($34.95 plus shipping and taxes) from Epic Gourmet Popcorn features a trio of popcorn bags in different flavors.

The Pride Mix is caramel-coated popcorn dusted with cheddar cheese. The Rainbow Mix sports the colors of the Pride flag in fruit flavors. The Love is Love Mix is a combination of the company's caramel, kettle corn, and Whoa Mama flavors.

Founded in Chicago by business partners Bill Rossi and Dan Earles, who are both gay, the company boasts it is the first and only National Gay and Lesbian Chamber of Commerce-certified popcorn company in the United States. It launched in 2017 and sources its popcorn from non-GMO kernels. It uses non-trans-fat cheese for its toppings and pops its kernels in coconut oil. The coming out-themed box debuted in October ahead of National Coming Out Day, which is annually observed October 11.

To learn more about the company's product lineup and to order online, visit its website at http://www.epicpopcorn.com.

Drag pay campaign honors 1st bar
A campaign aimed at setting a minimum booking fee for drag performers will present its first seal of approval to an entertainment establishment this month. The Financial District gay bar Ginger's will be awarded the honor December 19 during the "C U Next Time" drag show that night.

Christened the "Werk is Work!" campaign, San Francisco-based drag queen Alexis Atauri launched the effort in June. It had a stated goal of seeing performers paid "at least" $40 for a two-hour show with a maximum of two numbers, or if paid in tips, that they would be guaranteed baseline compensation of $40 by venue owners who would make up the difference if the audience gave less than that amount.

Ginger's will be given a sticker designed by local queer artist Diego Gomez that it can attach to its door or a wall to signify to patrons it has signed on to the pay initiative.

"They really do treat the artists well there and we are all so happy to bring the energy and entertainment into this space," Atauri told the B.A.R.