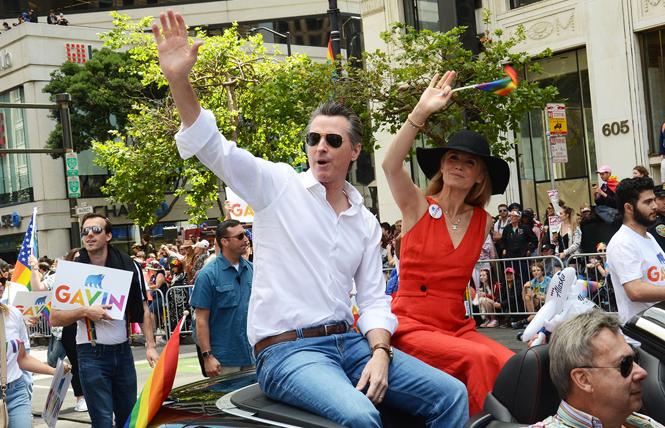 In what advocates say is a national first, California lawmakers have established a $17.5 million Lesbian, Bisexual, and Queer Women's Health Equity Fund.

The money was included in the state's 2019-2020 $214.8 billion budget that Governor Gavin Newsom signed June 27. According to the Los Angeles LGBT Center, it marks the first time a state has earmarked specific funds for LBQ women's health programs.

"After months of advocating for this funding, we are thrilled that California lawmakers recognized the tremendous health needs of lesbian, bisexual, and queer women," stated Lorri L. Jean, the center's CEO, in a news release announcing the creation of the fund. "These women have been invisible in health care conversations for far too long, and the consequences have been deadly."

Past Golden State budgets have earmarked funds for health programs addressing the needs of gay men and transgender individuals but never for lesbian and bisexual women, noted Terra Russell-Slavin, the center's director of policy and community building. She told the Bay Area Reporter in a phone interview that center staff had talked about correcting that omission in recent years and decided to make a concerted push to seek funding for LBQ women's health needs last year.

Service providers will now be able to apply for funding under the program through the California Department of Public Health, said Russell-Slavin. The programs must serve cisgender and transgender women who identify as lesbian, bisexual, or queer, she explained, adding that some services for transgender men also would qualify.

According to the agency, the money can go toward health and mental health care, domestic violence programs, and treatment referrals for smoking, alcohol, and substance abuse. It can also cover the cost of trainings about LBQ women's health needs for health care providers.

"The idea is to create a funding stream within the California Department of Public Health to focus on addressing health disparities for LBQ women, including transgender women. People can be transgender and lesbians," said Russell-Slavin.

The L.A. center, which runs the Audre Lorde Health Program for lesbian and bisexual women, worked with providers across the state to advocate for the funding, including holding the first-ever LBQ Women's Lobby Day in Sacramento. The Legislative LGBT Caucus backed the funding request, which the health advocates hope will now be replicated in other states.

"With this funding, we hope to not only improve health care for LBQ women across this state, but to pave the way for similar efforts across the nation," stated Jean.

Newsom's office did not respond to the B.A.R.'s request for comment about the funding. It was not highlighted by his press office in the news release it sent out to reporters about his first budget he signed as governor.

HIV funding criticized
While winning praise for the LBQ women's health funding, Newsom did come under criticism from HIV service providers for what they called his "limited investment" in curbing cases of HIV, hepatitis C, and other sexually transmitted diseases in the state. As the B.A.R. has previously reported, a coalition of 150-plus organizations had sought a $60 million allocation from lawmakers in Sacramento to fund a statewide initiative aimed at ending all three of the health epidemics.

But much more is needed, argued HIV advocates.

"California has the ability to end the HIV, HCV and STD epidemics, but our success is contingent upon significantly more funding and the political will of the governor and the Legislature. Unfortunately, the budget comes up short on both," stated SFAF CEO Joe Hollendoner. "Until elected officials make the necessary investments, our communities will continue to experience an unjust public health crisis."

Craig E. Thompson, CEO of APLA Health, praised lawmakers for the $15 million in the budget to address the trio of epidemics but argued it is not enough.

"California is falling behind other states in reducing new transmissions and that is something Governor Newsom and the Legislature have the ability to change," stated Thompson. "We have the data, knowledge, and tools needed to end these epidemics. Now we just need the political will."