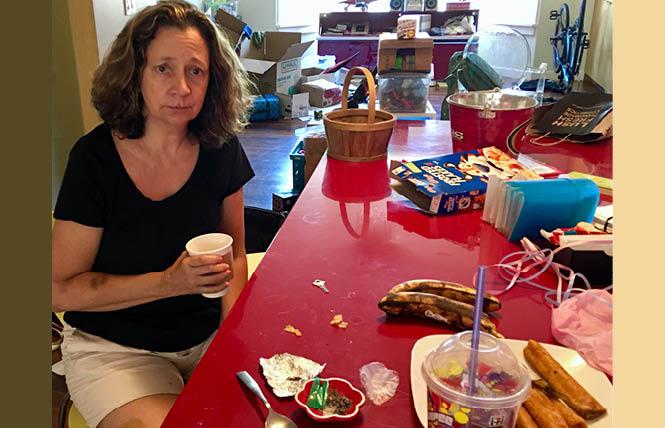 Angela Padilla sits at her dining table where an alleged burglar left drug paraphernalia, foreground, after ransacking and stealing items from her home over the weekend. Photo: Sari Staver

Burglars ransacked the Castro home of prominent lesbian attorney Angela Lucia Padilla over Pride weekend, leaving the house in shambles. She found used needles and heroin the alleged perpetrator apparently injected at her dining room table, where they enjoyed a meal using her dishes and glassware.

Padilla, 53, is the founder of two nonprofits — Family Dog Rescue, one of the city's largest dog rescues, and Bay Area Young Survivors, a support group for cancer survivors, which she started in 2003 after being diagnosed with life-threatening breast cancer.

At the time of the incident at her home on the 3800 block of 18th Street, Padilla was in Sonoma, where she also has a home, recuperating from surgery last week for a complication of an experimental treatment she is undergoing for invasive breast cancer. Her three children and three dogs were not at the San Francisco home either.

Returning to clean up the wreckage strewn throughout the house Monday, Padilla told the Bay Area Reporter she has decided to leave San Francisco, after 28 years in the city.

"San Francisco has become a cesspool," she said, looking around at the piles of her papers, clothing, and keepsakes strewn all over the house. "They took my clothing, my jewelry, and a lot of sentimental belongings from my grandmother and aunt."

In just the past year, Padilla said her car has been broken into four times and her property defaced on several occasions. Previously, burglars had broken into the garage, where they stole her children's bicycles, she said.

As she surveyed the damage and began to fill out paperwork for the police and insurance company, Padilla said, "I know it could've been worse. What if they had broken in while my children were home?"

"But it's really horrible to feel so violated," she added.

After meeting with police, including crime scene detectives who removed the alleged burglar's drug paraphernalia, Padilla ordered an alarm system and made plans to put the house in order.

A police spokesperson confirmed the case number and said the case is under investigation.

Immediately after the burglary was discovered Monday, Padilla hired retired San Francisco police officer Pedro Fernandez, now a private investigator, to stay at her house until the security system could be installed and the doors repaired.

"I'm too afraid to stay here alone," she said.

In a telephone interview, Fernandez said, "If you live in a multi-million dollar house near Dolores Park, your house is worth nothing. The park has become a camp zone with people shooting up on 18th Street in broad daylight. I saw people walking up and down 18th street checking gates to see if any were open."

On her Facebook page, Padilla told her friends, "If you are a liberal, soft-on-crime, apologist for anti-social behavior by thugs, low-lifes, and homeless people, you should just unfriend me now. It's time for Good, Law-Abiding People to Stand Up for Justice. Let's join together to Take Back the Streets!! Let's Make SF safe again."