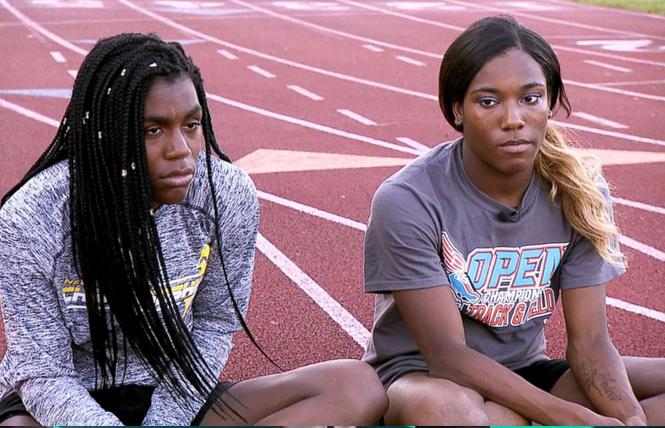 A recently filed lawsuit in Connecticut shows exactly the kind of sports limbo transgender high school athletes can find themselves in even when they are fortunate enough to live in a state that supports their civil rights.

The transgender inclusion policy of the Connecticut Interscholastic Athletic Conference, which governs high school sports in the state, is bound by the 2011 state law, "Public Act No. 11-55 — An act concerning discrimination," and that law forbids discrimination based on gender identity. According to TransAthlete, that makes Connecticut just one of 18 states (plus the District of Columbia) with trans-inclusive policies for high school sports. Under Connecticut high school policy, once an athlete has affirmed a gender identity, it cannot be changed again for athletic participation the remainder of that athlete's high school career.

"Girls deserve to compete on a level playing field," ADF attorney Christiana Holcomb said. "Women fought long and hard to earn the equal athletic opportunities that Title IX provides. Allowing boys to compete in girls' sports reverses nearly 50 years of advances for women under this law. We shouldn't force these young women to be spectators in their own sports."

Legally speaking, of course, a) the athletes in question are not boys but girls; and b) nobody is forcing anyone to be a spectator or denying anyone the right to compete.

The lawsuit identified Andraya Yearwood and Terry Miller as the runners whose participation the cisgender girls found objectionable. Both are being assisted by the American Civil Liberties Union.

"I have known two things for most of my life: I am a girl and I love to run," Yearwood told the Hartford Courant. "There is no shortage of discrimination that I face as a young black woman who is transgender. I have to wake up every day in a world where people who look like me face so many scary and unfair things. I am lucky to live in a state that protects my rights and to have a family that supports me. This is what keeps me going. Every day I train hard. I work hard to succeed on the track, to support my teammates, and to make my community proud."

Miller said, "I am a girl and I am a runner. I participate in athletics just like my peers to excel, find community, and meaning in my life. It is both unfair and painful that my victories have to be attacked and my hard work ignored."

Transgender issues in high school sports are more complicated than policies for adults. Gender confirmation surgery, for instance, is not recommended for adolescents. Many students cannot afford or do not wish to take hormone treatments. Many experts do not recommend any irreversible treatments for transgender youth because statistically there is a chance some of them will later realize they do not have gender identity disorder. (Last month, the World Health Organization announced it would remove gender identity disorder from its global manual of diagnoses, a major win for trans rights.)

All of which makes transgender youth a highly at-risk group vulnerable to suicide, depression, violence, and rejection — and the would-be athletes among them especially so when they are denied the opportunity to compete in sports.

And most especially when people do not recognize or respect their transition, like filing lawsuits saying that the girls may legally be girls but that does not mean they really are girls or have the same rights as cisgender girls. As is the case with ADF's Title IX complaint against the Connecticut trans-inclusion policy, in which ADF states, "This discriminatory policy is now regularly resulting in boys displacing girls in competitive track events in Connecticut."

By the way, once athletes move on to national meets, they may not be covered by their states' policies. In the case of track and field, covered by USA Track and Field nationally and internationally by International Association of Athletics Federation, transgender athletes are required to meet medical benchmarks to compete under the gender of their identity — but many major runs, such as the Boston and New York City marathons, say they honor the gender identity of registrants.

Martina Navratilova, who earlier this year said transgender female athletes were "cheating" and then apologized for using the word "cheat" but not the sentiment, was scheduled to host a BBC1 documentary called "The Trans Women Athlete Dispute" Wednesday, June 26. No possibility of bias there, eh?