Transmissions: More than a monument 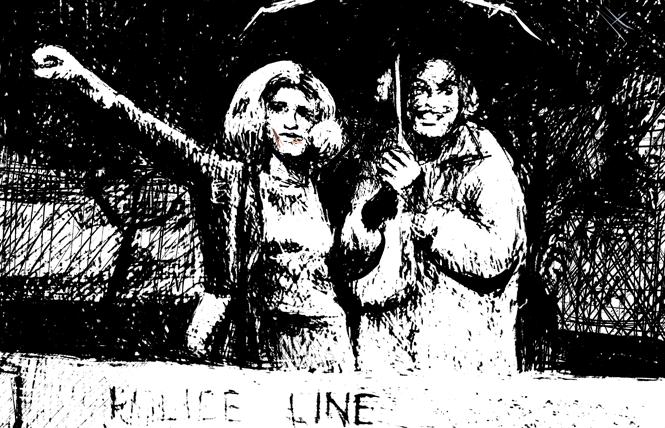 In conjunction with Pride Month, New York City has announced a future monument dedicated to Sylvia Rivera and Marsha P. Johnson. The memorial will be placed about a block away from the Stonewall Inn, the flashpoint of the modern LGBTQ rights movement and the site where the duo gained notoriety for their involvement in the Stonewall rebellion.

It should be unnecessary to describe who Johnson and Rivera are, but just in case, I'll explain. Johnson — the "P" is for "Pay It No Mind," she once said — was, in modern terminology, gender-nonconforming. She self-defined as a drag queen, but I feel it worthwhile to note that "drag" as a term was viewed somewhat differently in the time and place, and was often used as an umbrella term in the same way we use "transgender" today.

What Johnson did in the early morning hours of June 28, 1969 will likely never be known for sure. Many claim that she threw the first brick at Stonewall, while others dispute the claim. Even she said that she arrived after the riot had already begun. Nevertheless, she soon became a key individual in the rebellion, alongside Rivera.

Rivera was in the same circles as Johnson, living on the streets and eking out a life — and while some do deny Rivera had any involvement with the Stonewall rebellion, she was nevertheless key to many things that happened in the wake of that battle.

After the riots, Johnson and Rivera founded Street Transvestite Action Revolutionaries, or STAR, and fought for homeless LGBTQ people in New York. They founded STAR House to care and nurture young drag queens, trans people, and gender-nonconforming youth. Both worked for much of their own lives advocating for our community.

In 1992, shortly after Pride, Johnson's body was found floating in the Hudson River. Police called it a suicide, but evidence pointed elsewhere. In wasn't until 2012 — 20 years later — that the New York Police Department reopened her case as a possible homicide. It remains open and unsolved.

Rivera was living on the street in the late 1990s when the transgender community started blossoming, and quickly became politically active once again. She resurrected STAR — changing "transvestite" to "transgender" in the process — and fought for transgender and LGBTQ rights in New York. Her return was short-lived, however, as cancer would claim her life in early 2002.

For much of their lives, as I alluded to earlier, questions swirled around just how much of a part they played in the actual events of one evening in June 1969. I'm sure that the same will happen as this monument goes forward.

I would also argue that Stormé DeLarverie, a butch lesbian and drag performer who likely threw the first punch at the Stonewall Inn that morning, deserves a whole lot more credit than usually given.

Nevertheless, it is Johnson and Rivera who are key to the story of our movement. What they may have done or not, that one day, is only a single part of their story. The duo gave everything to our community in the wake of that event, and yet were still viewed as too queer for the very movement they helped usher in.

They have become a symbol, a testament to our community of fierceness, of determination, and of activism above and beyond one's self. Everyone who has marched in a Pride parade, who has stood up for their rights as an LGBTQ person, or who has enjoyed gains made by the LGBTQ movement owes a debt to this pair.

We owe them far more than a chunk of stone or whatnot on a parcel in Greenwich Village.

We need to learn from their example and their lives, and move forward.

STAR helped our queer youth, provided them a home, and watched them grow. We need to continue to raise up those who have been forgotten and marginalized everywhere. LGBTQ youth are still cast out by their families and end up on our streets. It is up to us to reach out.

Both Rivera and Johnson were often out on those streets too, and both suffered for it. We need to look at the rest of our community that could be out there trying to survive on the streets, and create sustainable services that can help people at any stage of their lives.

Rivera died of liver cancer, which is linked to hepatitis infection as well as exposure to alcohol. We need to continue to address alcohol use and abuse in our community, as well as illnesses like hepatitis.

Johnson, like so many others in our community, was murdered. We know just how common that is. We need to continue to fight back against the continual, sickening number of dead trans women of color, and continue to press for their killers to be brought to justice.

More than this, we need to work to include our whole community, and not push away people with the misguided notions of "respectability" in the face of a conservative movement for which we can never be too polished, too clean, and too submissive.

New York City will erect a monument to Johnson and Rivera, but it is up to each of us to make a world worthy of such a thing: a place where the real monument is a legacy of good works done in their names.

Gwen Smith reminds you that the first Pride was a riot. You'll find her at www.gwensmith.com.