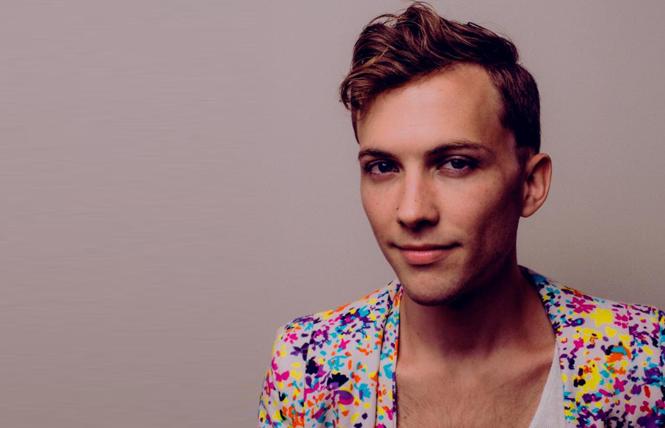 The GLBT Historical Society Museum will present "Mattachine: A Queer Serial" over three nights in April.

"Mattachine: A Queer Serial," as the Bay Area Reporter first reported last year, is a podcast that follows the true story of a secret organization created by the late Harry Hay that catalyzed the American gay rights movement in the 1950s. From its inception in 1920s Chicago, through secret speakeasy-style meetings, the podcast takes listeners into McCarthy-era paranoia that pulled activists apart and scattered the seeds of the homosexual movement long before Stonewall.

The series creator and host, Devlyn Camp, will be at the sessions and provide a visual component to accompany the serial. Joey Cain, a longtime friend of Hay's and activist and researcher, will be interviewing Camp after the podcast presentations.

All three events take place from 7 to 9 p.m. at the museum, located at 4127 18th Street in San Francisco's Castro neighborhood. Admission is free for historical society members and $5 for non-members.

The first program, "Dawn of the Movement: From Henry Gerber to Harry Hay," will be held Thursday, April 4. It will feature the Mattachine podcasts titled "Strange Sex Cult Exposed" and "The Call." It covers the origins of the movement. For tickets, visit https://bit.ly/2VKkNsO.

"To Be Accused: Government Crackdown and Homophile Resistance," will take place Thursday, April 11. It features the podcast episodes "To Be Accused," "The Lavender Scare," and "Diversified Individuals." It surveys the Mattachine Society's early years, the entrapment of one of its founders by the police, and the State Department's witch-hunt for "sexual deviants." For tickets, visit https://bit.ly/2H7kwwN.

Finally, the third evening, April 18, will feature "Cracks in the Foundation: Splintering into Homophile Alliances." It will include the podcast episodes "Are You Now or Have You Ever Been A Homosexual," "People Like Other People," and "Silly Letters." It looks at the rise in Mattachine's membership and an attempted organizational coup by conservatives and an FBI informant. For tickets, go to https://bit.ly/2IURvWz.

The series is made possible by the Calamus Fellowship and the GLBT Historical Society.

Felicia Elizondo, 72, was sworn in and attended her first DAAS meeting March 6. She joins out commissioners Gustavo Serina, who writes for the Bay Area Reporter as Tavo Amador; Martha Knutzen; and Michael Pappas on the panel, according to its website.

Elizondo is a longtime AIDS survivor who was one of the participants in the Compton's Cafeteria riot in the city's Tenderloin district. She is featured in the 2005 documentary "Screaming Queens: The Riot at Compton's Cafeteria." On a night in August 1966, transgender and queer patrons of the eatery stood up to police, fed up at being repeatedly arrested on sex work charges and routinely harassed in general. The event took place three years prior to the more famous riots at the Stonewall Inn gay bar in New York City.

Elizondo said that after being interviewed by a member of Breed's staff, she accepted the four-year term.

"I'm going to do my best to do the best for my community," she told the Bay Area Reporter in a brief interview last week.

Local samba, salsa, cumbia, bachata, merengue, mambo, cha cha cha, tango, bomba, plena, jive, rumba, and soca dancers will compete for the three titles. The adult competition will begin at 6 p.m. A contest for children and youth will be held at noon. Winners will become the official ambassadors for Carnaval 2019, leading the televised 41st annual parade. They will also receive a cash prize.

Organizers said they are seeking people to compete in the drag category. The deadline to submit an application is Sunday, March 31.

For more information, and to apply, go to http://www.carnavalsanfrancisco.org/events.

Relationship support group for women
Women Organized to Make Abuse Nonexistent Inc. has announced a healthy relationships support group that meets Thursdays from 11 a.m. to 12:30 p.m. at the organization's office at 29 Boardman Place in San Francisco.

The drop-in group began meeting last week and sessions will continue through May 9. Organizers said the group is offered in English and is geared toward survivors of domestic violence.

More details are available on the WOMAN Inc. blog at www.womaninc.wordpress.com.

Symptoms of TB disease can include a cough for more than two to three weeks, coughing up blood, shortness of breath, fever, night sweats, and weight loss. When a person with TB coughs, people who share that same air can become infected as well.

Health officials said in the release that if people have a risk factor for TB or are unsure, they should ask their health care provider about testing and treatment.

A list of TB testing sites in San Francisco can be found at https://bit.ly/2WjOcKn.