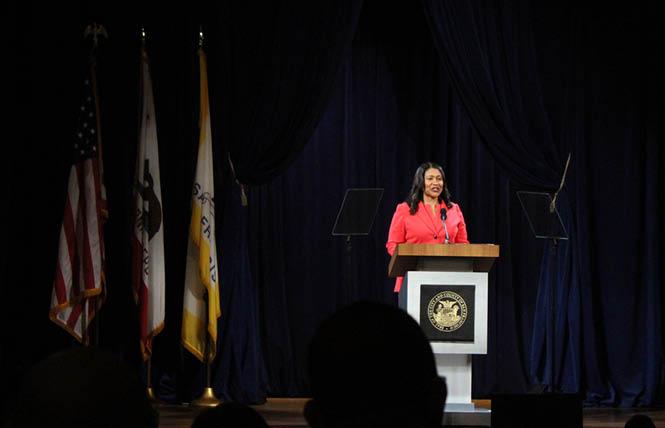 Colfax, a gay man, was formerly the city's HIV prevention director before leaving to lead the White House Office of National AIDS Policy in the Obama administration. Currently, he's the health and human services director for Marin County.

As Colfax told the Bay Area Reporter in an exclusive interview Tuesday night ahead of the mayor's speech, he will leave his current position soon to start at DPH February 19.

Breed made the announcement during her first State of the City speech Wednesday morning at the new National LGBTQ Center for the Arts.

"He knows our city and its challenges, and he is ready to get to work," Breed said of Colfax.

Breed added that she's confident Colfax will get San Francisco to its goals of zero HIV infections and reaching "our most vulnerable populations, particularly our African-American and Latino communities, who are not seeing their HIV infection rates drop."

Speaking to the B.A.R. Tuesday, Colfax said, "I think San Francisco has a history of leadership in health and I think the amazing DPH workforce, the community partnerships, and the innovative approach San Francisco has the legacy of taking from HIV to health coverage for all residents to building a state-of-the-art public hospital. San Francisco has always been a leader in health. It is an honor to rejoin the team."

"Mayor Breed made an inspired choice," Wiener said in a statement Wednesday. "Dr. Colfax is an exceptional leader in the fight against HIV, and he has my complete confidence in moving San Francisco toward our goal of zero new HIV infections, zero deaths from HIV, and zero HIV stigma."

"As an ardent supporter of PrEP, Dr. Colfax will work to ensure that our most vulnerable populations have access to all HIV prevention tools," he said.

"Congratulations Dr. Colfax," he wrote on Facebook. "Looking forward to working with you on mental health, substance abuse, and getting to zero."

In addition to the DPH news, Breed announced a slew of plans to combat challenges facing San Francisco.

"It's time our city holds its head up high again," Breed said to the crowd of nearly 250, who gave her a standing ovation at the beginning of her remarks. "I'm frustrated, just like you, about the issues that face our city, but I'm also motivated."

On homelessness, Breed said, "Since I've been in office, we built three Navigation Centers with 338 beds. That's the fastest expansion of shelter beds our city has seen in decades. And we've helped nearly a thousand people exit homelessness in six years. We have a long way to go and so much work to do, but we are making a difference in people lives."

"People are suffering from mental illness and these people need help," she said, announcing a commitment to open 100 mental stabilization beds this year and the creation of a new position, director of mental health reform. "We need to build people's lives, not shuffle them from emergency room to emergency room, from jail cell to jail cell. Our criminal justice system is not a mental health solution."

After announcing she's moving forward with a $300 million affordable housing bond, Breed said, "Housing affordability isn't just a San Francisco issue, it's a crisis throughout the state of California. If we had started building more aggressively 20 years ago, we wouldn't be in this situation."

Breed also introduced a program to get every high school student in San Francisco a paid internship. The program will help youth earn money and learn new skills to keep them from "going down the wrong path."

Breed said, "These young people will be exposed to opportunities they never knew existed. They can see themselves making a difference in a world they never thought possible. They will flourish and we will grow our workforce right here in San Francisco."

In support of the transgender community, Breed confirmed a continued investment in helping trans residents with housing and services.

"To those in Washington, D.C. that continue to try and erase transgender people: it won't work, not here," she said, to thunderous applause.

"Now, more than ever, as the president continues to fear-monger about walls and slander our immigrant communities, San Francisco is proud to stand as a sanctuary city. We are a city that's surrounded by bridges, not divided by walls, and we will stay that way," she said.

During the conclusion of her 30-minute speech, Breed mentioned that, when she took the oath of office six months ago, she believed in a government for all.

"I hope you believe with me; that you hold your head high; that you take pride in our city," she said. "We will meet these challenges and continue to light a better way to the future of our city."

After the address, Mandelman told the B.A.R., "[Mayor Breed] tapped into the angst that a lot of people are feeling.

"[She] reminded us that we love San Francisco and that there's a lot to be proud of," he added. "I feel very aligned with her on mental health, substance abuse, homelessness, and public power. I'm excited."