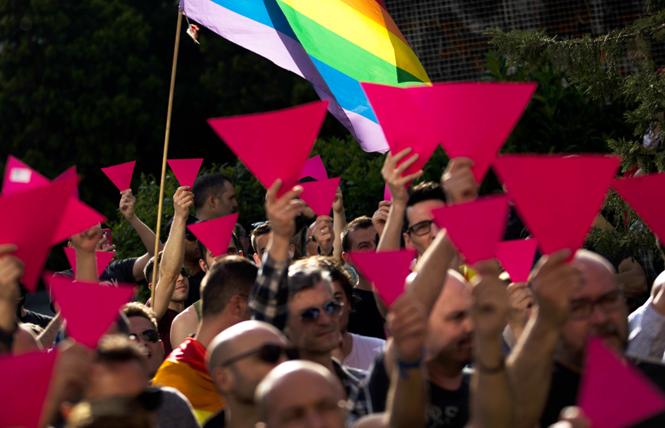 People hold up pink cardboard triangles and wave a rainbow flag during a gathering in support of the LGBT community in Chechnya. Photo: Courtesy U.S. Mission OSCE/Madrid, 2017/AP

LGBT activists sounded the alarm that Chechen authorities have renewed their crackdown on LGBTs in Chechnya, detaining several gay men and women.

According to a January 14 news release by the Russian LGBT Network, Russian LGBT rights activists estimated that two gay men have died due to being tortured and 40 others — both men and women — were arrested and detained in the Chechen city of Argun in December 2018.

Crime Russia reported December 24 that the two men were shot point blank in the head.

"For now, we don't have much information," Igor Kochetkov, president of the Russian LGBT Network, told the New York Times. "What we have is verified and sufficient to say a new wave has begun."

The new allegations come a year and a half after the first crackdown that reportedly began in December 2016 and less than a month after a damning report by the Organization for Security and Cooperation in Europe.

That report documented systematic torture, abuse, and murder of LGBT people in Chechnya.

In the release on Monday, Kochetkov said, "The local police makes every effort to prevent victims from leaving the region or applying to the courts in the future. They take away documents, they threaten the victims with the criminal proceedings against them or their close ones, and they force them to sign empty forms."

Kochetkov told the Associated Press that he was informed that there has been a spike in arrests of suspected gay and lesbian Chechens since December.

Homosexuality was decriminalized in Russia in 1993 with the breakup of the Soviet Union. In 1999, it was declassified as a mental illness. But homosexuality remains socially taboo throughout the country.

Social media posts are urging LGBT Chechens to destroy any evidence of their sexual orientation or gender identity, as queer women and transgender individuals are increasingly becoming targeted.

The LGBT network has helped about 130 queer Chechens escape to safety in host countries and plans to continue aiding LGBT Chechens get to safety, reported Meduza, a Latvia independent online newspaper.

The independent Russian newspaper originally broke the story about the arrest, detainment, and torture of an estimated 100 suspected gay and bisexual men in April 2017. Allegedly, three of the men were murdered.

The newspaper also reported on the mass executions of alleged LGBT people in Grozny, the capital city of Chechnya, that occurred in January 2017. The paper published a list of missing people presumed to be dead.

The number of people who were caught up in the LGBT crackdown grew. The LGBT network reported last July that 200 individuals suspected of being LGBT were detained and at least 20 were killed.

In its report, OSCE researchers released their discovery of overwhelming evidence of grave violations of human rights abuses and crimes against LGBT Chechens. One tactic is that authorities mask human rights violations by getting LGBT Chechens to admit to other crimes, such as drug trafficking and terrorism. Once victims admit to these crimes, authorities have the right to monitor and arrest them at any time.

Their findings concurred with those of Maxim Lapunov, the first gay survivor of Chechnya's anti-gay crackdown to speak out about his experience, despite his life being threatened by Chechen authorities if he did.

Lapunov, a gay Siberian who was living in Chechnya, detailed his account of being kidnapped, tortured, and being forced to sign a paper stating he was gay. His testimony prompted the investigation after more than a year of global outcry, diplomatic pressure by governments, and lack of cooperation by Russian authorities to properly investigate the allegations.

The report, published December 20, 2018, called upon Russian authorities to convene a special investigation committee to conduct its own investigation into the allegations. It also urged the Chechen government to shut down all unofficial detention facilities throughout the republic that held LGBT victims and to bring the perpetrators and those who were accessories to justice.

Deny, deny, deny
Putin, Chechen President Ramzan Kadyrov, and other officials continue to deny the allegations that a crackdown on LGBT citizens in Chechnya has happened or is happening now.

Kadyrov, who is the head of the autonomous Russian state in the Northern Caucasus, is one of Putin's key allies.

Kadyrov's press secretary denied the new allegations of the anti-gay crackdown by Chechen authorities to RosBiznesKonsalting, a Russian media outlet.

"All of this, to speak in literary language, is lies and disinformation," the spokesperson told RBK. "There are no prisons or places of detention in the Chechen Republic that are not part of the [Federal Penitentiary Service]."

Russia refuses to properly investigate the alleged human rights violations against LGBT Chechens. Putin only made a show of an investigation following international pressure in May 2017 by sending Kremlin human rights ombudswoman Tatyana Moskalkova to look into the situation. In September 2017, she reported that there weren't any human rights abuses against LGBT people in Chechnya.

By the end of 2017, she reportedly urged Aleksandr Bastrykin, the head of Russia's federal Investigative Committee, to open a criminal case in connection to Lapunov's allegations, according to Radio Free Europe.

The U.S. has taken steps against Chechnya by denouncing the LGBT crackdown and placing sanctions on suspected Chechen officials identified as potential human rights violators. Those moves came from Nikki Haley, the former U.S. ambassador to the United Nations, and former Secretary of State Rex Tillerson.

However, silence and inaction has been the policy of President Donald Trump, Vice President Mike Pence, and current Secretary of State Mike Pompeo.

Marie Struthers, a regional director at Amnesty International, spoke out against the resumed anti-gay crackdown in a January 14 statement.

"News that the authorities have resumed the crackdown is absolutely spine-chilling," said Struthers. "With lives in jeopardy, there is an urgent need for an international response."

In a statement, Ty Cobb, global director for the Human Rights Campaign, said that his department has made repeated calls to the administration, but the "White House has largely ignored the actions of the Russian-backed regime in Chechnya."

"Human rights violators in Chechnya must be held accountable and be brought to justice," he said. "Lives are hanging in the balance."

India's army upholds ban on gays
India's Supreme Court may have decriminalized homosexuality and adultery, but the country's military hasn't.

"In the army, it is not acceptable," Rawat told reporters when asked about the court verdicts striking down the colonial era anti-sodomy law known as Section 377 and the adultery law in September 2018.

India's armed forces, which are estimated to be a million-strong, are governed by their own laws. Certain constitutional rights enjoyed by civilians are restricted under military laws, reported the Guardian.

Homosexuality and adultery are both punishable in the military and carry sentences up to 10 years in jail if found guilty by an army court.

It's unknown how many LGBT service members are in the Indian military.

Jagdambika Pal, a member of the ruling Bharatiya Janata Party, introduced a bill seeking to amend the laws that govern the army. Pal wants to give equal rights and opportunities to LGBT service members and change the Army Act of 1950, Navy Act of 1957, and the Air Force Act of 1950, reported First Post.

Lithuania's top court issues ruling for same-sex spouses
Lithuania's Constitutional Court issued a landmark ruling for foreign spouses in same-sex binational marriages, saying that they must be granted residence permits by the country's migration department, despite same-sex unions not being recognized in the Baltic state.

"The refusal to issue permits cannot be based only on gender identity or sexual orientation," the court stated in its January 10 ruling.

The decision comes after the European Union ruled in June 2018 that member states must recognize freedom of movement for same-sex married couples.

Lithuania is the third emerging European country to grant binational spousal rights. In 2018, Romania upheld a European Court of Human Rights ruling for an American-Romanian gay married couple who got hitched in Belgium, and a Bulgarian court granted residential rights to an Australian-French same-sex couple, reported Emerging Europe.

However, Poland rejected a married same-sex couple's registration application earlier this month. The couple married in Portugal in 2017.

The Catholic Church disagreed with the court ruling.

"The court maintains that marriage is gender-based, while family is gender-neutral. Thus, the court's ruling sets these two concepts, which we view as being essentially interrelated, apart," the Lithuanian Bishops' Conference said in the statement, reported Emerging Europe.

The country has undergone some changes regarding acceptance of the LGBT community in recent years, though it still faces widespread discrimination in the Catholic country.

Vladimir Simonko, head of the Lithuanian Gay League, called the ruling "progressive." He told Agence France-Presse that it sent an important message to the country's LGBT community and lawmakers.