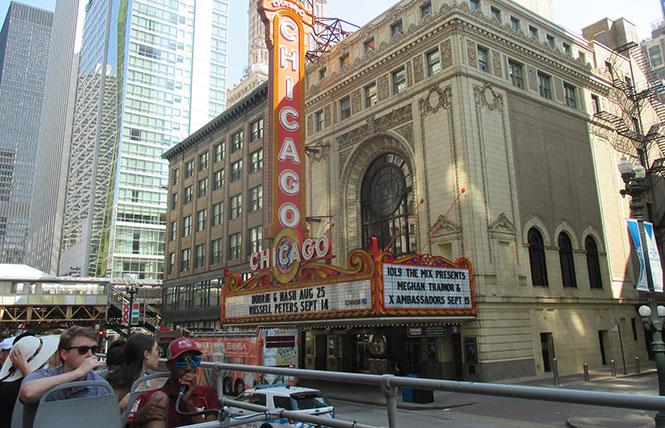 It was a pivotal moment in Victor Salvo's life that would eventually give birth to a Chicago landmark. The longtime activist read a brief profile in Time magazine in 1999 on Alan Turing, the British mathematician who helped break the Nazi Enigma code. Turing was gay and died by suicide after being convicted of engaging in homosexual sex.

"It went through me like a hot spear," said Salvo, a gay man who had survived a suicide attempt as a teenager. "I just screamed out in agony like I saw my mother being murdered."

Salvo's dogged activism in Chicago's LGBT community earned him a place in the city's LGBT Hall of Fame.

"Who was I to be in the Hall of Fame when no one knew who he was?" Salvo said of Turing.

That obsession led eventually to the Legacy Walk, 40 bronze plaques dedicated primarily to prominent LGBT people and a few to historical events, including Stonewall. The plaques were placed on rainbow-colored pylons that were installed in the North Halsted neighborhood, more commonly known as Boystown.

The first plaque was installed for Turing, whose story has since gained more attention, including the 2014 movie "The Imitation Game." Three San Francisco figures are among those featured with a plaque: Harvey Milk, Gay Games founder Dr. Tom Waddell and Leonard Matlovich, who became an activist after the Air Force discharged him for being gay.

Plans are in the works to open an LGBT visitors center in the Boystown neighborhood that will contain some of the plaques that will be rotated off the street pylons as new plaques take their place.

While the visitors center is two years away, the Windy City has long been LGBT-friendly, attracting Midwesterners in search of a big city gay scene as well as tourists from all over the world.

In sharp contrast to San Francisco, the city's downtown streets and parks are clean with a much less visible homeless population. During a visit in late August, despite the warm summer weather, I saw only one homeless encampment, which consisted of one pup tent. It looked like just one person was living there.

Chicago has come a long way. Native Americans knew it as swampland where an onion plant grew. The city's name is derived from an Indian word for onion. One of the earliest explorers, Jacques Marquette, saw beyond the onion plants and admired the strategic importance of Lake Michigan, with two rivers running through the land that would eventually become America's third-largest city.

The fire ultimately left the city with an architectural legacy that draws visitors from all over the world. The city was reborn after the fire but in brick, stone, and steel. By the way, the fire is believed to have started in, or around, the O'Leary family barn but there was no evidence of the legend that it started as a result of a cow kicking over a lantern.

Chicago makes the most out of its greatest asset, Lake Michigan. The city lined the lakefront with parks, beaches, and bike paths. The lake is only about a 20-minute walk from Boystown but the unofficial gay beach, the Kathy Osterman Beach, is about two miles to the north. Osterman was a former city alderman who was a strong ally of the LGBT community. The beach was renamed in her honor in 1993, a year after her death from cancer at the age of 49. 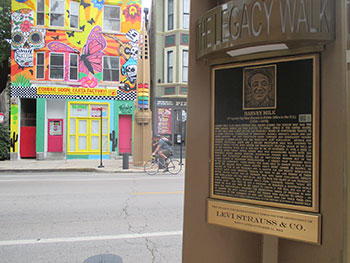 The Harvey Milk plaque is among many honoring LGBT people along the Legacy Walk in Boystown. Photo: Ed Walsh

Take a tour
For first-time visitors to the city, one of the best ways to get around without getting lost is on a bus, bicycle, or walking tour. The Legacy Walk offers a walking tour of the plaques that you can request through its website. For a nominal fee, a guide will take you or your group around for a walking LGBT history tour (http://www.legacyprojectchicago.org/).

The Chicago Cultural Center, in a former downtown library building, offers free walking tours of the city through the Chicago Greeter program. Google the center's website for more information.

On a recent trip, I took Bobby's Bike Hike (www.bobbysbikehike.com), which included a history lesson of the city's downtown and Gold Coast neighborhood and the city's famed — and free — Lincoln Park Zoo before heading back downtown along the lakefront bicycle path.

Several different companies operate bus tours throughout the city. Some will let you hop on/hop off at various attractions. I took the double decker Big Bus Chicago (http://www.bigbustours.com/en/chicago), which, thanks to guide Austin Echols, was both entertaining and very informative. I took the whole tour without hoping off and later took a bus or the subway to the attractions I wanted to see.

Speaking of the bus and subway, both are very good ways of getting around in Chicago. The subway, including the famed El, or elevated track trains, is the best way to travel when there is traffic. The city has bus service that, unlike Muni, moves quickly. A three-day pass for $20 is a good option for visitors, as you won't need to worry about having the exact $2.25 fare.

Chicago has a bike-sharing program similar to San Francisco's Ford Bike system. Chicago's program is called Divvy Bikes (www.divvybikes.com). The bikes are a fun way to explore the city. They offer a deal for $15 to use a bike for a 24-hour period for a maximum ride of three hours at a time, which is more than enough time to get anywhere in the city. The app shows you where the nearest station is where you can dock the bike. You can use the bike all day, just be sure to dock it at least once every three hours. You can dock the bike and immediately take out the same bike or another one at the docking station. The bike path along the lake is one of the best urban bike paths in the world. A large stretch of the path north of downtown was being repaved when I visited in August, but bikers were detoured on the grassy area next to the path.

A number of companies offer river cruises. I took the Chicago Architecture Foundation River Cruise that provided a great architectural history of the city known for its high rises. The Chicago River used to be a virtual sewer as businesses and apartment buildings dumped their sewage and other waste into the river. But now the river is cleaner, and all new construction is required to include a public riverwalk.

If you expected that a world-class city like Chicago would have world-class museums, you would be right. The biggest museum in the city, and what many would say is the best, is the Museum of Science and Industry Chicago (https://www.msichicago.org/). Although off the beaten path, a few miles from downtown, the trek is worth it. There is also the Art Institute of Chicago, known for its Impressionist exhibits and more (http://www.artic.edu).

Nightlife
The North Halsted or Boystown neighborhood is still where you will find the biggest concentration of LGBT nightlife. Halsted Street is the Castro Street of Chicago.

The Halsted Street mainstays are Sidetrack (http://www.sidetrackchicago.com/), which includes seven separate rooms and rooftop patio. The bar has been around for 35 years but looks new thanks to ongoing renovations. Popular nights include Monday, Friday, and Sunday show tunes and TRL Tuesdays with music videos from the 1970s, 1980s, and 1990s. Roscoe's (http://roscoes.com/) is another Boystown mainstay kitty-corner from Sidetrack. The newly renovated space boasts a lively dance area, karaoke, and amateur drag contests. The Closet (https://www.theclosetchicago.com/), about a 10-minute walk away on N. Broadway, used to be the city's lesbian bar. While it is still popular with women, it is more mixed now.

Chicago used to have a couple of gay saunas in the heart of Boystown but the oldest, Man's Country, closed a year ago. Steamworks, part of the same ownership of Steamworks in Berkeley, is still going strong (http://www.steamworksbaths.com/).

The gays aren't just in Boystown. North along the lakefront Uptown, Edgewater, Andersonville, and Rogers Park are all popular gay neighborhoods.

In the Uptown neighborhood, Big Chicks (http://www.bigchicks.com/) is a rustic, friendly locals bar where you can meet for a drink and sample some tasty bar food. Touché bar (https://touchechicago.com/) has been going strong in the Edgewater neighborhood since 1977. It is a popular leather and bear cruise bar with a backroom.

Accommodations
On my recent visit, I had the pleasure of staying at the Best Western Hawthorne Terrace (http://www.hawthorneterrace.com/), which was perfectly situated just a short walk to the heart of Boystown. It deservedly gets kudos for being one of the best hotels in the city with reasonable rates that start at about $85.

City Suites Chicago (https://chicagocitysuites.com) is another hotel in Boystown and just steps from the Belmont El stop. Rates start at a very reasonable $72.

If you prefer a smaller hotel feel, check out Villa Toscano (http://thevillatoscana.com). The eight-room inn is in the heart of Boystown with rates over the slower winter months for as little as $69.

Getting there and around
Chicago's largest airport, O'Hare International, as well as the smaller Midway, are serviced by the city's subway system. It will take you about 45 minutes to get to downtown on the train from O'Hare and about 25 minutes from Midway. Southwest flies nonstop to Midway from San Francisco International Airport and is a good option as it's a little closer to the city.

Public transit in Chicago is so good that a car is more trouble than it is worth. If you really need to get somewhere in a hurry, Uber and Lyft cars are everywhere all the time.

Eating out
Chicago has some of the best restaurants in the world and is known as the birthplace for casual eating favorites including both deep dish and thin-crust pizza. Ceres' Table (www.cerestable.com) is a chic Italian restaurant with delicious gourmet pizza. If you are in the mood for elegant French cuisine, check out Chez Moi (http://www.chezmoichicago.com/) on N. Halsted Street about two miles south of Boystown. In downtown Chicago, the Revival Food Hall (www.revivalfoodhall.com) features 15 different restaurant stands under one roof. It is a great one-stop-shop for all the best food in Chicago. More than a quarter of Chicago's population is Latino and you can get a great sampling of Latin cuisine in Latin City (www.latinicity.com). Like the Revival Food Hall, it is made up of several individual food stands. In the heart of Boystown, Wood (http://woodchicago.com/) is known for its creative cocktails and superb brunch. The Split Rail (www.splitrailchicago.com) is known for filling comfort food and a bargain happy hour. Fried chicken is one of its specialties.

For more information, visit www.choosechicago.com. Be sure to click on the LGBT section.