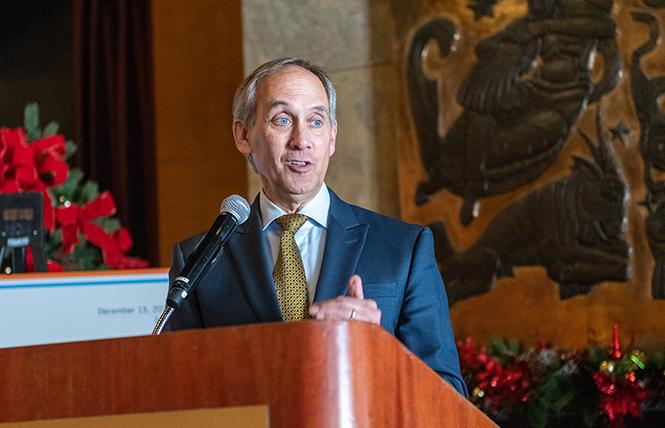 With just 11 days left in 2018, LGBT nonprofits are ramping up their end-of-year giving campaigns. Letters and emails have been hitting the mailboxes and inboxes of the agencies' supporters since the start of December.

Many are centered on appeals highlighting that anonymous benefactors of the agencies will match the donations. The inducement is a proven tactic in convincing people to write a check.

Both the San Francisco LGBT Community Center and National Center for Lesbian Rights, for instance, have lined up "generous" donors who agreed to match every gift up to $100,000 sent in by December 31. The GLBT Historical Society, which operates an LGBT museum in the heart of San Francisco's gay Castro district, has a donor willing to match up to $50,000 donated by the end of the month.

"Matching donations are very effective. Donors love the idea of their dollars being leveraged," said Roger Doughty, president of Horizons Foundation, an LGBT philanthropic organization focused on the Bay Area. "And as a donor myself, I understand that. I love knowing my dollar will be doubled or tripled because a donor wants to have impact. And that means double or triple the impact."

Giving some nonprofit executives and their development directors pause this year is an increase to the standard deduction people are able to claim on their 2018 tax returns. The amounts have nearly doubled from 2017, such that a single person can claim $12,000 this year compared to the $6,350 standard deduction they could claim in 2017.

The increases could result in fewer people choosing to itemize their deductions on their 2018 tax returns. Doing so means charitable donations that are tax deductible won't reduce their tax bill this year.

So far, Doughty said he has not heard that nonprofits are seeing "anything unusual" in their donors' giving patterns this year due to the increases in the standard deductions. They are a result of the tax overhaul Congress passed and President Donald Trump signed into law in 2017.

"I think there is a lot of speculation about the impact of the tax law. And we are intensely interested to see what those results are," said Doughty. "The main piece that is a cause of concern to a lot of charitable organizations is the standard deduction was doubled, I believe, or close to it. The result of that was, for many taxpayers, it became better to use the standard tax deduction instead of itemizing their tax deductions."

Yet for many high-income households, which account for the bulk of charitable giving in the country, the changes to the tax law have had little impact to date on their donations to nonprofits.

"What we have seen consistently, and it is actually true of many of the last studies we have done, people have consistently said the impact of the tax law change around charitable deductions and estate tax have little to no impact on their giving," said Miki Akimoto, a national philanthropic practice expert at U.S. Trust, which is part of Bank of America. "What we know is that, for ultra-high net worth households, they are probably going to itemize anyway."

Akimoto was involved in the "2018 U.S. Trust Study of High Net Worth Philanthropy: Portraits of Generosity." It is the result of an ongoing collaboration between U.S. Trust and the?Indiana University Lilly Family School of Philanthropy.

The report, issued every other year, has included data on LGBT households since 2016. Of the 1,646 households in this year's report, whose incomes are greater than $200,000 and/or net worth is greater than $1 million, excluding the value of the primary residence, 7 percent identified as LGBT.

By comparison, the report noted that 56 percent of households in the general population gave an average of $2,520 to charity, according to the latest Philanthropy Panel Study by the Indiana University Lilly Family School of Philanthropy.

"There has been a shift in the last few years if you look at all charitable giving by individuals nationally," said Akimoto. "We are beginning to see large, really big seven and eight figure gifts becoming a bigger and bigger percent than dollars raised and smaller gifts declining."

The report found that giving to causes in the category of "Other," which includes LGBTQ issues, increased by 25 percent between 2015 and 2017. And among the LGBT households in the study, 43 percent gave to LGBTQ-focused organizations and causes.

"LGBTQ households are less likely to donate to religious organizations, health related, combined charities, and youth or family services," found the report. "Among all high net worth households, a relatively small percentage supported racial or ethnic and LGBTQ affinity groups. However, among these groups, giving to these respective causes was significant."

Overall, the report found that the majority of wealthy donors in the study expect to maintain (84 percent) or increase (4 percent) the amount they give to charity in 2018 under the new federal tax law. Yet, 26 percent of LGBTQ individuals expect to decrease their charitable giving levels, according to the report.

"I know that, from my contacts in the nonprofit sector, there is a great deal of weariness and worry what this end-of-year giving period will look like," said Akimoto. "They are pretty weary right now, but there is quite a bit of good news in terms of people's commitment to charity."

Robbie Martin, Equality California's director of development since June, said he doesn't expect to see any changes in donor's giving patterns this year.

"To be utterly candid, the topic of the new tax law has not been a prominent conversation with our donors," said Martin.

The statewide LGBT advocacy group has two donors that will match up to $40,000 in donations that come in by December 31. While those contributions are not tax deductible, donations to the Equality California Institute are. It is aiming to raise $1 million.

Rather than wait until the end of the year, Martin has been encouraging supporters of EQCA to join its Capitol Club sustaining donor program by either making a onetime contribution of $600 or donating $50 a month.

"I think a good solution for people is moving more toward recurring gifts as opposed to large onetime gifts," he said. "It is easier to budget for that."