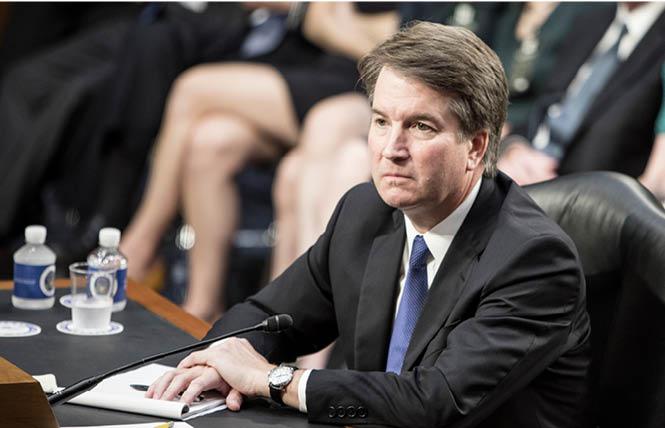 A new era in the U.S. Supreme Court's history began Saturday afternoon, October 6, when the Senate voted 50-48 to confirm the nomination of a federal judge who is expected to provide a fifth and majority vote against equal rights for LGBT people.

LGBT legal activists say the replacement of retired Justice Anthony Kennedy with appeals Judge Brett Kavanaugh will likely turn their focus away from the federal courts to state courts, meaning a significant slowdown in advancements toward equal rights for LGBTs nationwide.

But Kavanaugh's record of supporting right-wing conservative positions, coupled with his expressed hostility to "left-wing opposition groups," will almost certainly embolden groups like the anti-LGBT Alliance Defending Freedom to take more appeals to the Supreme Court.

And Saturday's vote had collateral damage for LGBT groups, too. A longtime ally of the LGBT community, Senator Susan Collins (R-Maine), gave Kavanaugh the last vote he needed to secure the confirmation. In doing so, she acknowledged the concerns of LGBT people while dismissing them as misguided.

In a political drama Friday afternoon that Collins orchestrated for maximum attention, the senator referred to Kavanaugh's carefully veiled remarks about two LGBT Supreme Court decisions as if his remarks were evidence of his support for equal rights for LGBT people.

She noted that some people she met with regarding Kavanaugh's nomination "expressed concerns that Justice Kennedy's retirement threatens the right of same-sex couples to marry." Kennedy led the 5-4 majority in Obergefell v. Hodges in 2015, which struck down state laws banning equal marriage rights for same-sex couples. He also wrote a 7-2 decision this year in Masterpiece Cakeshop v. Colorado that gave voice to the importance of treating LGBT people with "dignity and worth," though it sided with the baker and said the Colorado Civil Rights Commission violated his free exercise rights when it ordered that he sell cakes to same-sex couples the same as he sells to heterosexual couples.

Collins said, "Judge Kavanaugh described the Obergefell decision ... as an important landmark precedent." She gave him credit for making mention of the fact that Kennedy's decision said, "the days of treating gay and lesbian Americans or gay and lesbian couples as second-class citizens who are inferior in dignity and worth are over in the Supreme Court."

But in fact, during his first confirmation hearing in early September, Kavanaugh repeatedly avoided answering direct questions about whether he believes Obergefell was correctly decided. His quoting of Kennedy's decision did not come across as admiration but as an attempt to use up the limited time of Senator Kamala Harris (D-California), who was questioning him about the decision. The most Kavanaugh would say was that Obergefell is "precedent."

Kavanaugh dodged other questions from Democratic senators who sought to determine his positions and feelings about LGBT people and their legal rights. And when asked whether, as an adviser to President George W. Bush, he had expressed an opinion concerning Bush's support for a constitutional amendment to ban marriage for same-sex couples, Kavanaugh claimed, "I don't recall."

Fierce anger at Collins
LGBT legal and political advocates seemed both stunned and furious at Collins' apologia for Kavanaugh.

"Susan Collins' attempt to clean up Brett Kavanaugh's image was appalling," said Rea Carey, executive director of the National LGBTQ Task Force. "... Some might have thought Collins' claims of Kavanaugh's commitment to uphold marriage equality was unusually wishful thinking, but her intentions to deceive the public became clear the moment she cherry-picked his citation of the Masterpiece Cakeshop case. ... Kavanaugh will not be the vanguard for the rights of LGBTQ people, he will be the fifth vote to open the door to rampant discrimination based on a person's religious or moral objections to any other person they choose."

Human Rights Campaign President Chad Griffin issued a statement within minutes of Collins' announcement, criticizing her decision to "sell us out."

Shannon Minter, legal director for the National Center for Lesbian Rights, called Collins' support of Kavanaugh a "slap in the face to women and all sexual assault survivors" and said he has "little doubt that Kavanaugh will be a consistent vote against liberty and equality for LGBT people."

Minter said LGBT legal advocates will likely try to keep LGBT cases out of the Supreme Court "whenever possible."

Jennifer Pizer of Lambda Legal Defense and Education Fund said, "there's likely to be an increase in litigation in state courts" now, as there has been in the past. Such was the strategy in the late 1980s after the Supreme Court ruled, in Bowers v. Hardwick, that states could ban and criminalize intimate relations between same-sex couples.

The immediate fallout
Chief Justice John Robert swore Kavanaugh into office shortly after the Senate's vote Saturday afternoon. As he did, and for hours into the night, thousands of protesters gathered in the plaza and at the doors of the Supreme Court building expressing outrage over the confirmation. When they refused to move off the steps of the court, police arrested them. Although there were some signs in the crowd that referred to "LGBTQ Rights," most protesters seemed unusually unified in their focus on opposing Kavanaugh because of allegations by at least three women that he was involved in sexually assaulting young women during his high school and college days.

Under intense pressure from the public, the Republican leadership in the Senate announced it would ask President Donald Trump to direct the FBI to look into those allegations, which it did last week. But reports began emerging that the agency was conducting a very limited investigation and ignoring calls and tips from former friends and associates who said they could provide relevant information about Kavanaugh's behavior during that time.

The FBI report on its investigation was not released to the public, but Republican leaders said it found "no corroboration" for the allegations pressed by a Palo Alto University professor, Christine Blasey Ford, Ph.D., who said she was sexually assaulted by Kavanaugh when they were both in high school. Kavanaugh denied all the allegations.

Political tensions escalated dramatically last week when Trump, at one of his political rallies, mocked Blasey Ford, suggesting that her allegation was not believable. In front of another rally on Saturday night, Trump praised Kavanaugh and derided "radical Democrats" and the "angry mob" for opposing the nominee. He urged his supporters to vote in November to increase the Republican hold on the Senate and House majorities.

"You don't give power to an angry left-wing mob," said Trump. "The Democrats have become too dangerous and extreme to govern."

While Trump hopes to rally his supporters to preserve or expand Republican control of both houses, Democrats and opponents of Kavanaugh's confirmation are vowing to elect enough Democrats to both chambers to give the party the majority. While winning control of the Senate could provide Democrats significant insurance against Trump naming another nominee to the Supreme Court, the balance of that court is, for now, a decidedly unfriendly one for LGBT people, observers said.