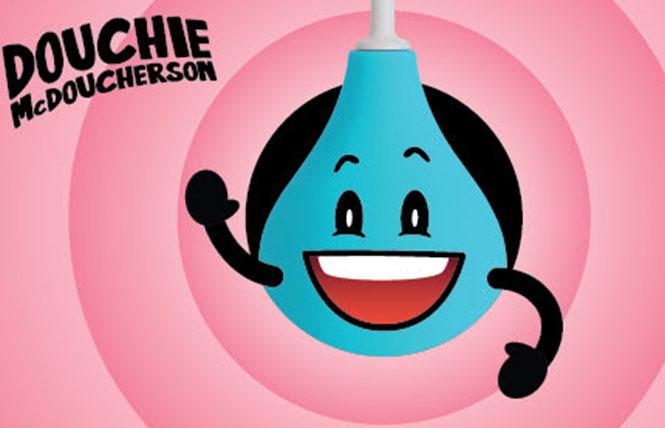 San Francisco health officials over the years have turned to cartoon characters in order to relay important health messages to men who have sex with men in attention grabbing ways.

The latest fictional figure to promote a sexual health message aimed at gay and bisexual men comes from the San Francisco AIDS Foundation. This time it is a blue douche bottle that at times dons eyeglasses or is adorned in a doctor's white smock and stethoscope.

"Douchie brings butt health and happiness out of the closet so you can care for your butt in the way it deserves," explained the agency in a March 2017 post on its Beta blog.

Roxane Chicoine, SFAF's creative director, has created the iteration of the character for this summer's campaign. One poster released this year features Douchie promoting a number of butt health tips.

When it comes to douching, the poster advises men "to go easy" and only use water or saline at room temperature. It is best to limit douching to once a day, adds Douchie, and no more than two to three times a week.

"A lot of people do it but don't talk about it," said Land in an interview this week with the Bay Area Reporter at Strut to talk about the campaign.

Most people douche "in secret," noted Crouch, and may be embarrassed to talk to their doctor about issues they are experiencing with their anus. Having the posters featuring Douchie in the exam rooms at Strut has encouraged patients to broach the subject, he added.

"We want guys to start to talk about it and open up the conversation that people weren't having," said Crouch.

It is important to ensure men have the right information about how to douche because, if done improperly or with the wrong equipment, it can have adverse health effects, said Crouch.

Or they use the wrong fluids, like vinegar, bleach, or hydrogen peroxide, to douche with, falsely thinking it will function as a disinfectant against STDs.

"People will use all different fluids. They think if they put chemicals in there it will kill off everything," said Crouch. "People are also using coke bottles or all sorts of weird, little things to douche with."

"Men are douching for a clean butt, not to protect against STIs," said Crouch.

As Land explained, "If you don't douche that doesn't mean you are dirty."

And added Crouch, "A lot of people don't like to or don't want to douche. That is OK."

Positive reaction
The reaction to the campaign has been overwhelmingly positive, according to SFAF. A survey it conducted online last year resulted in 163 responses, with many men writing in detail to the agency regarding their experiences and advice for other men.

Another advised, "Go easy until you find your individual tolerance level. Too much and too deep can produce unwanted side effects."

Other surveys done for the campaign have resulted in hundreds of replies. The campaign has been relatively cost effective for SFAF; apart from staff time, the agency has spent less than $200 on it. This summer alone, from July 19 through last Sunday, 83,924 people visited the webpages related to the campaign.

At the agency's Castro Street Fair booth Sunday, October 7, a bean bag toss game will feature Douchie as well as the promotional posters they have been appearing on since July prior to the Up Your Alley fair, the smaller, sister event to this weekend's larger Folsom Street Fair fetish festival.

"It is a complicated organ to talk about," said Crouch.

To see the results from the survey last year, visit https://betablog.org/results-anal-douching-survey/.