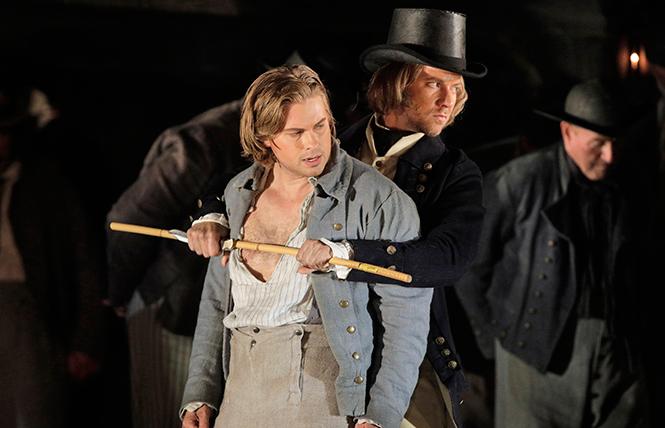 "Billy Budd," Herman Melville's unfinished allegory of innocence and guilt upon a British war ship, deeply examined and given some spiritual closure by composer Benjamin Britten and librettists E.M. Forster and Eric Crozier, is the second offering in San Francisco Opera's fall season line-up. It turns out a stunning success.

Cast from strength and supported by conductor Lawrence Renes and the tightly committed orchestra, the new-to-SFO production seems optimal for an opera sometimes criticized for shallow moralizing and closeted homosexual subtext.

I don't see why detractors make such statements when the librettists' thoughts, however subtle and complex, are made so open and clear to most sensitive observers. Meaning is evident in the often boldly beautiful and terse English of the script, further conveyed here in easy-to-read supertitles. 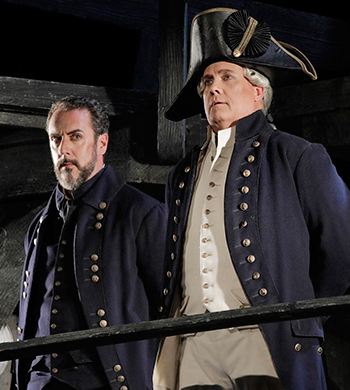 If anyone in the seagoing tale is closeted or morally ambiguous, it is Captain Vere, portrayed sympathetically by tenor William Burden in a performance of great depth and vocal clarity. Called "starry Vere" by his devoted crew and man-child Billy, tantalized by shocking Iago-like master-at-arms John Claggart, and haunted by his own conscience, he is a pivot point for understanding the negative effects of avoiding personal truth.

Bass-baritone Christian Van Horn is ideally cast as Claggart, investing the raw evil of the character with enough agonized self-loathing to keep him from becoming a cartoonish villain. He uses the cavernous, oaken sound of his voice to convincingly dominate the frightened sailors and set poor Captain Vere's troubled mind further ablaze.

At the heart of the drama but spiritually above the fray is pure-hearted Billy. Impressed upon the Indomitable from a merchant ship (ironically) the Rights o' Man, his mysterious background surely included some early trauma. He stammers whenever confronted with incomprehensible cunning and cruelty. A flaw that forces him to blind action when words cannot be found, his stuttering also brings about his tragic end.

Suitably handsome and angelic in a brawny sort of way, American baritone John Chest makes his SFO debut in the title role. The former Merola Opera Program participant comes to the main stage with a perfectly realized depiction. He can climb the forbidding set with the best of the supernumeraries and still maintain a steady, agreeably dark-sounding tone. His acting is unforced, and his final soliloquy is heartbreaking. Memories of Nathan Gunn's fine portrayal in the Company's last production have been beautifully exceeded.

Forty-four men from the SFO Chorus, prepared by Director Ian Robertson, and eight boys from Ragazzi Boys Chorus provide a most realistic underpinning to Britten's genius evocation of the sea and the men who sail upon it. The crew's wordless grumbling (spoiler alert) after Billy's horrific execution was like a punch in the gut. The composer's writing is so vivid, one is amazed at the variety he achieved without women's voices.

SFO's voyage with HMS Indomitable is challenging at many levels, but Britten's haunting score is served flawlessly in Grandage's vision and the Company's breathtaking revival. Days have passed, and I'm still feeling the impact.