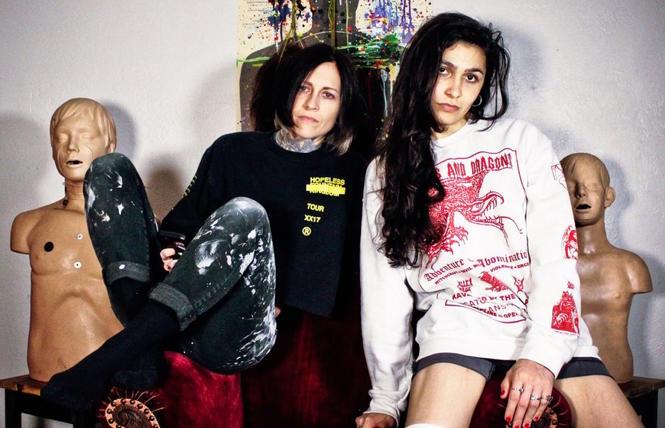 Queer duos have been a part of the modern LGBTQ music landscape for years. Remember Romanovsky and Phillips? The Indigo Girls? Erasure? Tegan and Sara? Two people can make cool music as easily as three or more.

A musical duo as well as a couple, KK and Jasmine of Dogjoy are purveyors of evocative electropop, as is evident on the full-length cassette, "Sober Nights," and digital EP "Hardcore Fun."

Gregg Shapiro: How did you come up with the name?
[Sings] "Philosophy... is the talk on a cereal box. Religion... is the smile on a dog." Edie Brickell (writer of the song "What I Am"). Is there anything more joy-inducing than man's best friend?

As my dog Coco's human, I definitely agree! How many dogs do you and Jasmine have?
We have one sweet old girl, Lucy. A 13-year-old, 70-pound Lab/Pit mix.

How long have you been living in St. Petersburg, Florida?
Jasmine's been here for about eight years and I've been here for three.

What brought you there?
We both grew up in different parts of Florida but ended up in St. Pete, 'cause it's the coolest!

What do you like best about St. Pete?
A huge local economy supports this city. It's so reassuring that things can still stay local and close to home. Tons of businesses and artists are doing their thing here. Plus, it's beach weather every day [laughs].

There are a lot of Pride festivals in Florida, but St. Pete's is said to be the best — have you attended?
Yes. We've gone to a few independently in the past, never together.

What would it mean to Dogjoy to perform at St. Pete Pride?
It would be radical! We're still figuring out our audience, who'll ultimately love Dogjoy, but if it were up to us it'd be the girls, gays, and theys.

Dogjoy's full-length debut "Sober Nights" was released digitally as well as on cassette. Why did you decide to do a cassette as opposed to, say, vinyl?
Cassettes have been making a huge comeback for years now and we love 'em! Plus, vinyl is way more expensive to manufacture. We wanted to put out some sort of physical album so decided on that with the resources we had.

"Sober Nights" opens with the romantic "Valentine." As a couple, how much of your songwriting is about being together?
Probably all of it [laughs].

I love the references to the periodic table in "You In Another Life." Are one or both of you science geeks?
Thank you! I think we're both just geeks, in general. Maybe word geeks more than science geeks, but I wouldn't be lying if I said we have a kid's chemistry set somewhere in the house [laughs].

"You In Another Life" is an exuberant dance track. With summer approaching, what would it mean to you if the song became a staple at Key West and Provincetown tea dances?
It would literally be the best thing in the world if that happened!

"Super Glue," from Dogjoy's recent EP "Hardcore Fun" is an instrumental track. What was the inspiration for the song, as well as the video?
Technically, I'm singing through a vocoder so I'm not sure if that counts as instrumental. Depends on which member of Daft Punk you ask, I guess [laughs].

The inspiration is that we wanted to release a heavy AF EP shortly following "Sober Nights" to show everyone who's boss.

The video was inspired after I became enamored with CPR dolls a few months ago and found out they make baby CPR training dolls. I needed to have one, and needed to write his origin story.

Pride festivities are, once again, returning. Has Dogjoy had the opportunity to perform at a Pride festival in the past? If not, what would it mean to both of you to be able to do so?
We haven't yet because we're a super new band. But, of course, that would be a dream come true. I know things will get better in the world and we'll find ourselves there one day!

Janis Ian: lighting the way in music
Sign up!