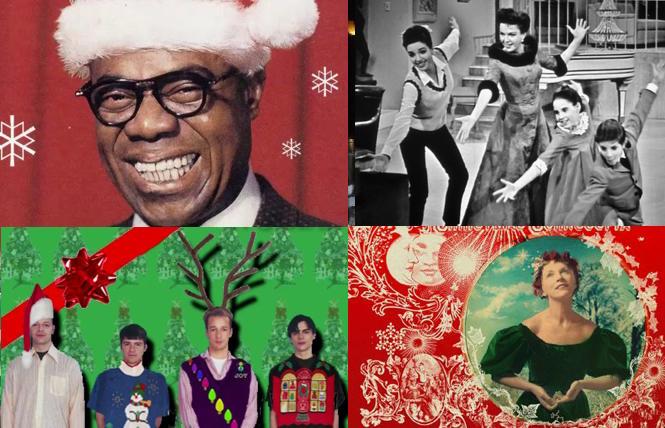 "Are you musical? used to be code for "Are you gay?" Perhaps it still is. Goodness knows, we miss live theater. Until the collective curtains go up again, Sounds of Broadway shares playlists of classic Broadway scores. On December 24 and 25 (Christmas Eve and Day) enjoy Hanukkah and Christmas-themed musical theatre favorites. Host Stu Brown hosts trivia games and even takes requests!
Visit soundsofbroadway.com

Have I ever shared the story of how I once met Annie Lennox in New York City's meatpacking district? She was shooting a music video some time in the late 1980s, wearing wings while a cameraman shot footage of her pacing on the loading dock of a closed warehouse. Anyway, she's adorable, and her Christmas Cornucopia's tenth anniversary re-release is entirely listenable.

With Still Home for the Holidays, bring R&B grooves from multiple singer-songwriters together for a bittersweet collection that'll keep you warmer than a cup of mulled wine (Who drinks that stuff anyway?) Enjoy songs by Ayanis, Ghoss, Pinks Sweats and others. Kick off the full album with Trey Songz' "Christmas Morning."

While we're into classics, Ella Fitzgerald can make the corniest classics fresh as her Christmas Songs album showcases the ever-popular vocalist, from the well-known "Winter Wonderland" and "Let It Snow" to the lesser-known "Moonlight in Vermont" and the whimsical "Santa Claus Got Stuck in My Chimney."

While we're on a classics mood, enjoy 18 Christmas songs recorded in the late 1940s, including a very young Frank Sinatra.

For jazzy instrumentals, enjoy a one-hour mix courtesy of the Jazz and Blues Experience.

More for watching as well as listening, we can't ignore the quaint camp of The Judy Garland Christmas Show, with her three adorable kids (Lorna and Joey Luft and young Liza Minnelli in a fun dance number!) and special guests Mel Tormé and Jack Jones.

Wait, what? You've never heard the wacky Beatles Christmas singles? Not their album of traditional songs, but single 45s sent to official fan club members, each with a rare comedic absurdity (They get progressively stranger from 1963 to 1969). "Gary Krimble to you!" and a "Merry Goo Year."

How about a Bossa Nova Christmas? Feliz Navidad, indeed from the Café Music BMG Channel.

Get a giggle in your stocking with The Kinsey Sicks' "We'll Be Home for Christmas." The dragappella quartet also has some swag for a perfect (although late) gift. kinseysicks.com

Feeling like a punk? Enjoy 8faizon8's punk Christmas playlist. Kick it off with Sex Pistols' "Jingle Bells." Yeah, it gets sillier, with Dropkick Murphys' hilarious "The Season's Upon Us," cooler with Joan Jett and the Blackhearts' "Little Drummer Boy" and Blondie's "We Three Kings." Bad Religion's "Silent Night" is far from silent!

Keep on rocking with Weezer's entire Christmas album from 2008. Give the dudes some damn figgy pudding!

Looking ahead to our next ruined holiday, pop some bubbly at home as Frolic's NeonBunny plays New Year's Eve grooves on January 31, starting at 9pm. "Be with us as we give a big middle finger to the worst year of our collective life," he wrote in his newsletter about his special Quarantine Fuck 2020 Edition set. Don your fursuits or animal onesies, and tune in at frolicparty.com