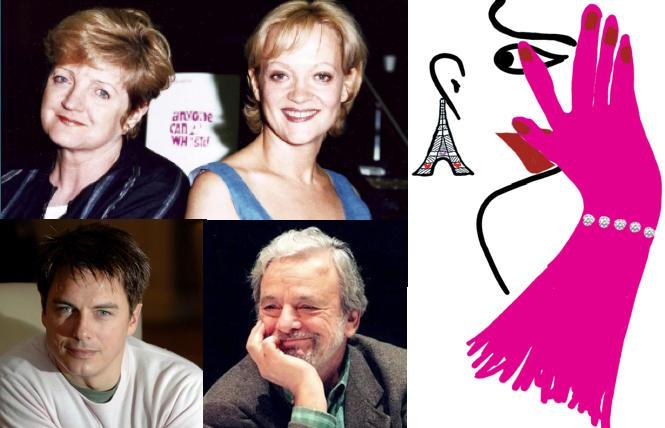 A 1997 recording of the full score of Stephen Sondheim and Arthur Laurent's cult favorite musical about corrupt politics, a miracle fountain and asylum inmates will be released on December 4, giving musical theater fans a new score to enjoy.

Maria Friedman, Julia McKenzie, and John Barrowman lead the cast of Anyone Can Whistle, with a full supporting cast, chorus, full orchestration by Don Walker, and book writer (the late) Arthur Laurents as the Narrator. This marks the first full-score recording of what has become a cult favorite for Sondheim fans, just in time for his 90th birthday.

Premiered in 1964 on Broadway, Anyone Can Whistle tells the story of a corrupt Mayoress in an impoverished town who whips up the fake 'miracle' of a curative spring of water (actually a hidden pump) to drum up tourism. Described as a dark satire on conformity, fraud, and a treatise on the question of sanity, the cast also includes a nurse heroine, a doctor with a mysterious past, and an asylum of inmates, or 'cookies.'

With an intricate story (see the Wikipedia entry for a full synopsis), the musical draws apt parallels to today's troubles: corrupt politicians, mass hysteria and a naïve belief in miracles over facts. Sound familiar? The two-CD recording's booklet makes the point even clearer, with quoted lies from Donald Trump almost matching lyrics from the musical. 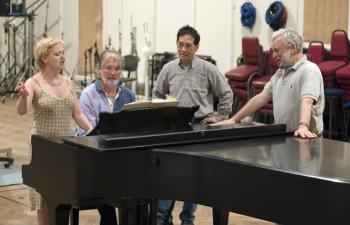 One of few Sondheim 'flops' (like Merrily We Roll Along), the show marked the Broadway musical debut of Angela Lansbury (as Mayoress Cora Hoover Hooper), almost cast Barbra Streisand as Nurse Fay Apple (replaced by Lee Remick when Streisand booked the lead in Funny Girl), and endured numerous pre-production woes, from a struggle to find backers to a lead actor (Henry Lascoe) suffering a heart attack during the Philadelphia tryouts.

Despite harsh critiques, the original production won a Tony nomination for Herbert Ross' choreography. It received mostly negative press reviews and closed its run at the Majestic Theater 12 previews and nine nights after its April 4, 1964 opening.

In the years since, few productions have been mounted, with the exception of concert versions, including at Carnegie Hall in 1995, which was also a benefit for the Gay Men's Health Crisis, with Madeline Kahn, Bernadette Peters and Scott Bakula. Other productions have been staged in Chicago and London. 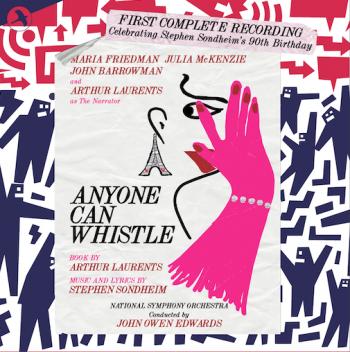 Yet a recording of all the songs and music was not made until 1997. Along with a full cast, and a 35-member chorus of "cookies" (asylum inmates), the U.K.'s National Symphony Orchestra accompanies, led by conductor John Owen Edwards.

And that London recording was not released until now, as producer John Yap added finishing touches to the recording during the onset of the COVID-19 pandemic in 2020.

"The brilliance of this recording gives the show more energy and sparkle than it's ever had. It made me proud of it," said composer Sondheim in a press statement.

Since the 1997 Anyone Can Whistle recording was shelved, the lead actors went on to many other performing accomplishments. Maria Friedman has starred in the British TV series Eastenders, is an eight-time Olivier Award nominee, and twice won Best Actress in a musical (Passion and Ragtime London productions). Julia McKenzie has performed in four Sondheim musicals, is a six-time Olivier Award nominee and a two-time winner, and starred in the TV series Agatha Christie's Marple.

The openly gay Barrowman released several solo albums, performed in numerous musicals, including Sondheim's Company, starred in the science fiction series Torchwood, and has become a fan favorite in his appearances at comic and science fiction conventions worldwide.

"McKenzie, Friedman and Barrowman were undoubtedly at the height of their powers, and all three have never sounded better," wrote Craig Glenday, Chair of the Stephen Sondheim Society in an advance review. "The power in Julia's voice is a potent reminder of why she is one of the - if not the - definitive Sondheim interpreters."

With several songs from Anyone Can Whistle having become favorites of leading cabaret stars (particularly the title song), the musical itself has only recently found a better appreciation. In his 2000 book about Broadway composers, Steven Suskin praised the "fascinating extended musical scenes, with extended choral work [which] immediately marked Sondheim as the most distinctive theatre composer of his time."