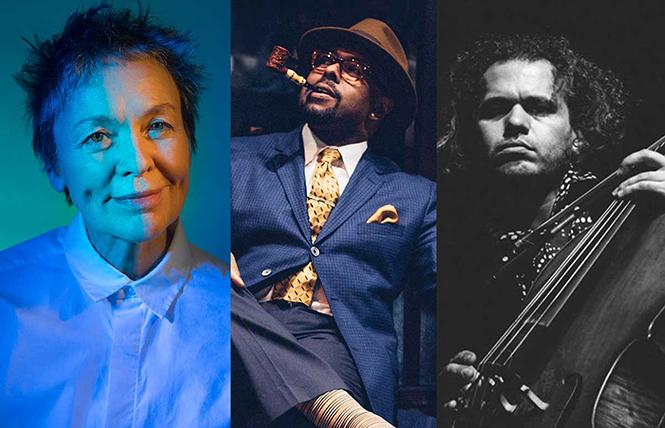 Performance artist Laurie Anderson has changed so much over the years and into her mature work. As a young conceptualist in NYC, she did things like stand in skates in a block of ice and play her violin until it melted out from under her. She created elaborate multimedia works, really one-woman operas ("United States, I-IV"). Then, unexpectedly, came Pop stardom ("O Superman"). "I turned a corner in SoHo today, and someone looked right at me and said, 'Oh no, another Laurie Anderson clone.'"

Sometime in the early years of this century, Out There noticed that Anderson's public profile had changed. She was playing small nightclubs in New York, sometimes with her (late) husband Lou Reed, sometimes with other avant-garde and jazz musicians. These shows were modest in scale but ambitious in their musical experimentation and scope.

Last week Anderson returned to San Francisco for a stint as Resident Artistic Director at SFJAZZ Center, and OT attended all four of her performances. First, on Thursday night, she led a string-based trio with bass virtuoso Christian McBride and cellist Rubin Kodheli, a jazz set that seemed completely free and improvised. During the music, Laurie told us about holograms of famous performers like Maria Callas or Roy Orbison doing touring shows with backup musicians. "So you can be dead and still do a 'live' tour!" She conjured up a giant hologram of B.B. King.

But the headliner seemed in despair at the current state of the world and the very real crisis of climate collapse. She thought, What would her heroes advise we do? Philip Glass would say: "Make music." John Cage: "Listen." Mahatma Gandhi: "Resist." James Brown, the Godfather of Soul: "Get on up and do your thang."

The next night's show was a duet with cellist Kodheli, and Anderson seemed more in a spiritual mood. They played selections from "Songs from the Bardo," Anderson's recent release based on settings of the Tibetan Book of the Dead. The concert became something of an extended guided meditation led by Laurie, in which you were not sure if you were being sung to, hypnotized or seduced.

Saturday night found Anderson again accompanied by Kodheli on cello, this time with the addition of avant-garde vocalist Mike Patton, of Mr. Bungle and Faith No More fame. The group made music along to samplings of texts from "Quanjing Jieyao Pian," the final chapter of "Jixiao Xinshu," a famous military manual written in the 16th century by Ming dynasty general and Chinese national hero Qi Jiguang. The chapter, whose title translates to "The Fist Canon and the Essentials of Nimbleness," takes as its subject the use of unarmed combat exercises as physical training, and is the first known written document of martial arts instruction. Anderson found the poetry in these prescriptions, and reminisced about Reed's and her own Tai Chi practice.

Finally, Sunday night found Laurie Anderson solo on the SFJAZZ stage, alone with her electric violin (really in viola range), her keyboards and filters. She reprised musical and conversational riffs from the week. Of all the shows, this was the first to sell out, because in a Laurie Anderson concert, all you really need is the Renaissance woman herself.