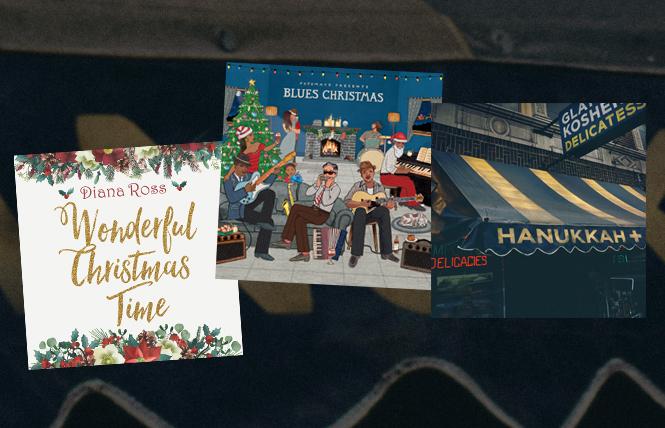 Welcome to the 2,373rd annual installment of our holiday music survey, filled with goodies for the good, the bad, and the naughty. All albums were auditioned in file format, with high-resolution noted. Most of these albums are also available on streaming platforms, with Tidal, Qobuz, and Amazon Music HD your best options for full CD quality and hi-rez.

Diana Ross: Wonderful Christmas Time (Universal) First issued in 1994, 35 years after The Supremes released their only Christmas LP, "Wonderful Christmas Time" was remixed and is now available in vinyl and download formats. The post-Supremes, sanitized Ross sings well, but her highly produced arrangements have about as much soul as Wonder Bread. Hearing Ross sing Stevie Wonder's "Overjoyed" leaves me wanting the original. The London Symphony Orchestra accompanies five of the 20 tracks; thanks to its potent message, "Someday at Christmas" is one of the best.

Gothic Voices: Nowell synge we bothe al and som (Linn/hi-rez) This lovely stocking-stuffer abounds with late medieval English carols, chant, mono- and polyphonic songs and motets for Advent and Christmas. Gothic Voices, the top-flight, four-member a cappella medieval ensemble, sings wonderfully 30 years into their career. Selections by Johns Dunstable and Cooke and Leonel Power share the honors with Anon. and his kin.

Christmas: The Gesualdo Six, Owain Park (Hyperion/hi-rez) Exquisite a cappella renditions performed by the beautifully-voiced men of Gesualdo Six. Recorded in Trinity College Chapel, Cambridge, the program focuses on the birth of Christ. We begin with Philip Lawson's excellent arrangement of "Veni Emmanuel" before skipping between Thomas Tallis (b. 1505) and Cheryl Frances-Hoad (b. 1980). Highly recommended.

Hanukkah+: Various Artists (Reference/Universal) Anyone expecting a traditional Hanukkah album will be taken aback by this pop-oriented collection from singers who include Jack Black, Adam Green, Yo La Tengo, The Flaming Lips, and Loudon Wainwright III. The tracks ride roughshod over lounge music, retro, and country/western. The collection, available on vinyl as well as CD, includes a Passover Bonus that someone, somewhere won't want to pass over. Did I really hear the line, "Unlike Yom Kippur, where you zip up your zipper?"

Christmas with True Concord: Carols in the American Voice (Reference/hi-rez) Arizona's Grammy Award-nominated True Concord Voices & Orchestra of Arizona, directed by Eric Holtan, give us 17 English-language Christmas selections. This collection is perfect for anyone seeking a handsomely voiced assortment of familiar titles: Stephen Paulus' arrangement of "Silent Night" and Robert Shaw's take on "Lo, How a Rose E'er Blooming."