Music as antidote to evil 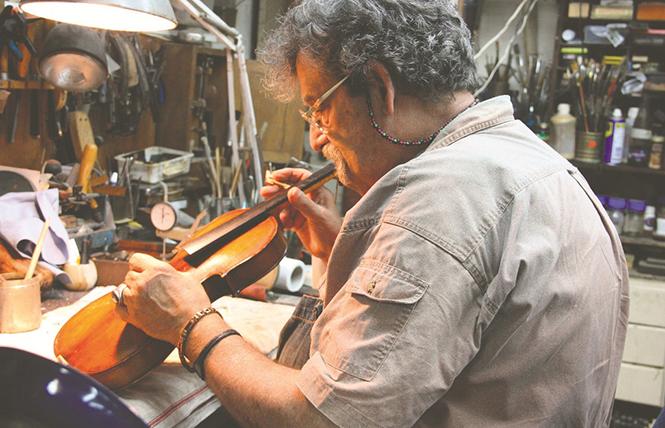 The rapidly approaching new year will bring to the San Francisco Bay Area 50 of the 86 so-called "Violins of Hope," recovered and restored Holocaust-era string instruments that survived the ghettoes and the death camps. These historic instruments are the centerpiece of an impressive range of programs presented by Music at Kohl Mansion. Musical performances will include "Intonations: Songs from the Violins of Hope," a world premiere by composer Jake Heggie and librettist Gene Scheer featuring mezzo-soprano Sasha Cooke, violinist Daniel Hope and a string quartet composed of musicians from the San Francisco Opera Orchestra.

Over 40 Bay Area arts organizations are collaborating in an eight-week West Coast residency, Jan. 16-March 15, 2020, coinciding with the 75th anniversary of the liberation of Auschwitz. We're promised concerts, exhibitions, lectures, films, and community forums; and a commemoration of International Holocaust Remembrance Day set for Jan. 27 at San Francisco's Temple Emanu-El.

All of the artists involved consider these events to be projects from the heart. As composer Heggie said at a press lunch last week at Hayes Street Grill, "Cultural memory is very important." We'll have more details as the events approach, but for more info, go to www.violinsofhopesfba.org.

Theatre Bay Area Award winner Don Reed is hosting his own one-man sketch-comedy show "That Don Reed Show" at the Marsh San Francisco, and Out There caught the show last Saturday night. It's billed as an evening of irreverent sketches, edgy stand-up, music, and moving drama, with a little bit of improvisation. This means it's basically a grab-bag of the multi-talented Reed doing his favorite bits and gags.

He's a comic for whom physical movement is as important as words. We could see that in his "dance impressions" of: 1) a guy dancing with his girlfriend at the club while keeping an eye open for his other girlfriend; 2) a guy who thinks he's dancing to the beat, but he's not; and 3) a woman who says, "I don't want to dance" while dancing her ass off in her seat. Also see: Reed's "Twilight Zone" episode which envisions a mutated creature who's half T-Rex, half Sammy Davis, Jr. High-larious!