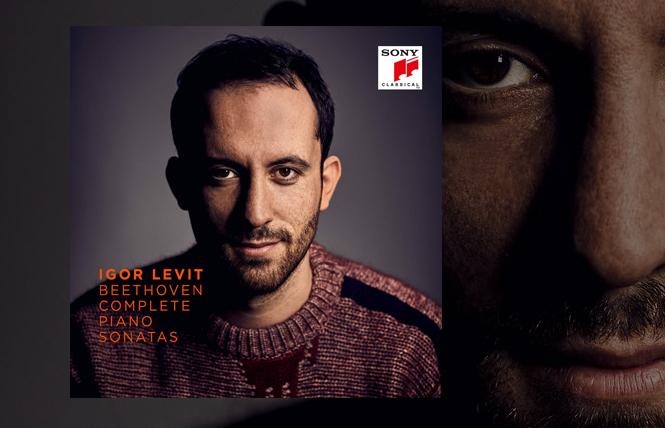 The pianists who perform and record all of Beethoven's piano sonatas in cycle are typically musicians of the keenest intellect and the deepest feeling. With the 2020 Beethoven 250th birth anniversary coming at us, Jonathan Biss will be performing a complete cycle for Cal Performances, and a word to the wise, Go!, must suffice.

The 32-year-old Igor Levit, three of whose four commercial releases for Sony have included Beethoven, has just seen the release of "Beethoven: The Complete Sonatas," all 32 of them, and the results are momentous in any way you care to use the word. Levit is in the process of performing full cycles in venues around the world, some of which will be favored with all 32, and the word to the wise is Book Now, anywhere you can. We have a crop of pianists Levit's age technically and interpretively so good that our piano repertory needs are covered for the foreseeable future. But among them Levit alone plays Beethoven as the pinnacle of the piano repertoire, mining the genius within and behind every note.

Sony serves up the sonatas chronologically despite their having been recorded in different venues. I dipped in first at what some would consider an unlikely juncture, Op. 22, in B-flat Major. I came to love it in a happier time in the music world when Ivo Pogorelich made a video performance of it that stopped my wandering ears in their tracks. The piece celebrates its links back to a style not inappropriately called galante, decorative yet with the expressive potential composers such as C.P.E. Bach found in it. Pogorelich, unusually unmannered, was so absorbed in the work's beauties that he didn't have to make it sound cosmic.

Levit is a truer visionary, finding grandeur in the minute as well as the mighty, which is evident from the specificity and care he lends every note of Beethoven's very first sonata. In Op. 22 he captures the music's delicate Mozartian filigree and zest of the music while running the torrents of notes across a broadly terraced dynamic range, injecting the main musical ideas into near-murmurs within them. From the second movement, an Adagio for which Beethoven asks "great expression," the gravity that is Levit's trademark comes as if from above, enraptured as much by the music's directness as by its poetry. Even when it broods, there's light in the tone.

Levit's interpretations — somehow performances seems more the right word, since it's not as though anything is overlaid, but rather, that everything is observed — could be mistaken for no one else's. The effect is never achieved through overemphasis or eccentricity, but with an enfolding, uninterrupted intensity whatever the tempo (often fast), dynamic or temperature. As the two Beethoven sonatas in Pogorelich's new Sony CD demonstrate, unmoored extremes and eccentricities masquerading as liberties soon become ghoulish.

There isn't a single throwaway among any of Levit's sonatas, but the famous ones define new turf. The "Moonlight," deliberate and on the verge of staccato at its start, lacks nothing in atmospherics by eschewing the commonplace and tracing the harmonic movement with consummate subtlety. The relative angularity of the middle movement sets the stage for a spitfire and accelerating Presto finale with the bark-and-roll energy of an earthquake.

Levit has commented that he sees the cusp of the cycle — where Beethoven becomes fully himself — in the "Waldstein," which he plays with an onrush of musical ideas articulated as pell-mell as I've ever heard them. They exalt in their contrasts and dance a tarantella at the gates of the possible. Its central Adagio comes as a controlled fusion experiment after the controlled fission explosion of the "con brio" Allegro. It in turn melts into the ensuing Rondo quietly promising the cataclysm of sound to come.

If the "Appassionata" were one degree more intense it would be frightening; the "Tempest" is purely post-climate change; the "Pathetique" contemplates deeply contrasting feelings sensitively. If there's one in the set that feels like it might have been composed with Levit's specific faculties in mind, it's "Les Adieux."

It begins with an otherworldly inwardness before vaulting into action. It's as if the entire first movement were suspended from a garland of staccato high notes, each with its own weight. Part of the way it expresses the valedictory is in the potency of the rests, however brief. The natural decay of sound is at once the end of the world and the promise of richer life to come.

There's nothing remotely anonymous about the sonatas without "titles." Such as there is a disappointment anywhere here, it's that the late sonatas, Opp. 101ff., are the recordings Levit made in his electrifying studio debut in 2013. They've lost none of their power and sublimity over time; still, one wonders how he'd play them today.