Out There does openings 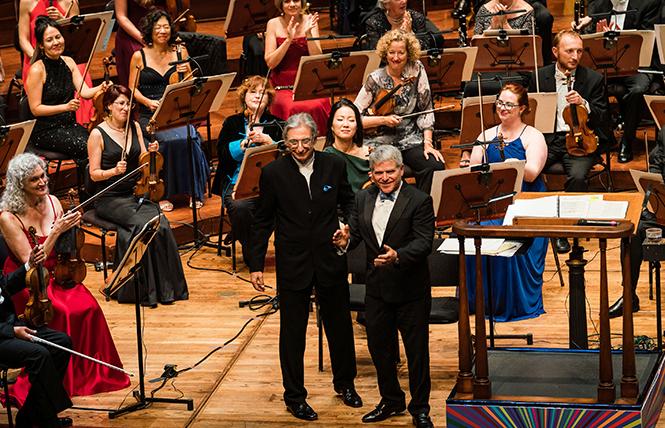 MTT and his husband Joshua Robison are honored during ovations at the San Francisco Symphony's Opening Gala. Photo: Drew Altizer

Security was unusually tight for the San Francisco Symphony season opening gala this year. We couldn't understand why we needed a "Press" wristband until we witnessed the concert's closing ovations, when out on stage came Speaker of the U.S. House of Representatives Nancy Pelosi, Governor Gavin Newsom, Mayor London Breed, symphony presidents, a host of civic leaders and many Bay Area sportsball team owners, all there to congratulate SFS music director Michael Tilson Thomas on the start of his 25th and final season as head of the class. But the most moving of a full evening of tributes to MTT came from his husband and career partner Joshua Robison, when they gave each other a long and heartfelt embrace onstage. We're a sucker for man-on-man appreciation.

The concert was festive and fun, and you can read all about the substance of both SFS and SFO opening galas in music writer Philip Campbell's reviews this week. Once the finale had sounded, the ovations had ended, and the confetti had fallen (cobalt blue, MTT's favorite color), the crowd moved on to the afterparties outside on Grove Street and inside the party tent. There we found champagne, liquor, noshes, live music, dancing and all-around partying in fancy dress.

The true endurance test of opening week came two nights later, during the San Francisco Opera season opening gala. Out There did the whole enchilada: the cocktail reception in the Opera House foyer, the Bravo! Club champagne reception in the outdoor loggia, all five acts of Charles Gounod's "Romeo & Juliet," then the glamorous afterparty in the Opera Ball tented pavilion. We found ourselves chatting with an Oxford don who turned out to have been SFO General Director Matthew Shilvock's thesis adviser during his schooldays. He asked us to identify the operagoers partying around us in carnival masks; we're not really a society columnist, but did our best to point out former SF mayor Willie Brown and various identifiable socialites.

When Shilvock, SFO Association President Keith B. Geeslin and Chairman of the Board John A. Gunn made welcoming remarks from the Opera House stage, protesters Michael Petrelis and Ben Becker shouted "Impeach Trump now!" from the balcony and dropped flyers. It was a tepid protest and rather ineffectual, as the SF Opera is not Congress, nor is there any political litmus test involved in loving opera. We'd guess most of the audience agreed with the protesters' message, but not their means of presenting it. Perhaps all the tightened security was visited upon the wrong opening gala. Anyway, it was over quickly and hardly spoiled anyone's fun.

Incoming SFS music director Esa-Pekka Salonen (2020-21 season) recently told Departures magazine, "A very good orchestra can react in a fraction of a second to an impulse, a beat, an idea of a clarinet player mid-phrase. It has a neural network like a shoal of mackerel." SFS, SFO: we'll swim with these schools of fish anytime. Meantime OT can put away the ebony tuxedo, studs and spats for another year, knowing the fall arts season has officially begun.