Queen Elizabeth lights up the stage 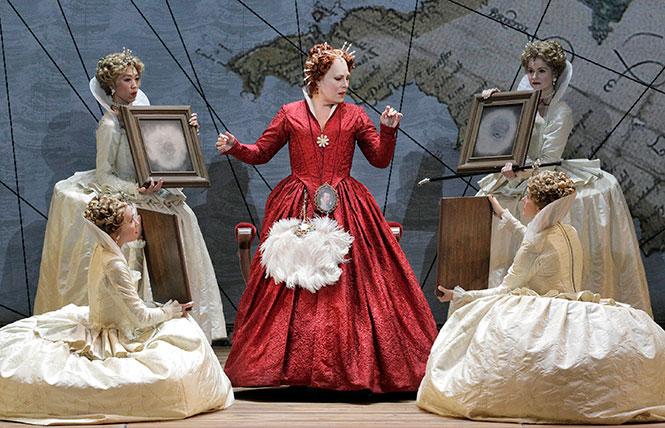 Director Stephen Lawless' original Canadian Opera Company staging aims to please on multiple levels, and succeeds in providing an inventive framework for the entertaining but often inaccurate libretto by Salvadore Cammarano, which chronicles the tempestuous relationship between Queen Elizabeth I and the unruly Robert Devereux, 2nd Earl of Essex.

It's set in an impressive replica of Shakespeare's Globe Theatre designed by the late Benoit Dugardyn, with gorgeous costumes by Ingeborg Bernerth and effective lighting by Christopher Akerlind. Lawless paces the Tudor-era tragedy briskly, with intelligent mindfulness of the composer's solid musical structure and the daunting challenges facing the singers.

He supplies illuminating back-story with appearances by Elizabeth's parents Henry VIII and Anne Boleyn, and even a pop-up by the Bard of Avon himself, in a charming pantomime enacted during the Overture. It quickly brings us up to speed on the Virgin Queen's youth and reign to date. She may have inherited her father's iron will to survive, and imperiously rule a court fraught with intrigue, but she also suffers the tortures of the damned in her love life; at least, according to librettist Cammarano.

His invented love triangle, based very loosely in historical possibility, involves Good Queen Bess with Devereux and Sara, the Duchess of Nottingham. Sara is the favorite among Elizabeth's ladies, and wife to the conflicted Duke. His friendship with Devereux is poisoned by unfounded (as it tragically turns out) suspicions of her infidelity. 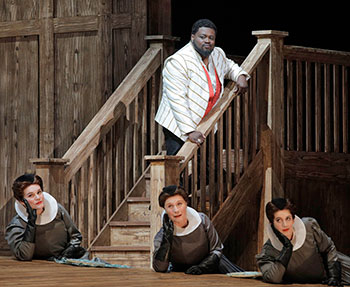 After a failed command sortie in Ireland, where he signs a peace treaty with the rebels against royal orders, Devereux returns to court amidst rumors of treason. The machinations of his enemies, especially a wily Lord Cecil and stolid Sir Walter Raleigh, bring Elizabeth to a horrible impasse. When the apparent betrayal of her romantic love by Robert sets the seal on his fate, it shouldn't be a spoiler to share that Devereux lost his head for Gloriana after all.

The ingredients for a bel canto tour de force are all set for a convoluted but essentially basic tale of love and jealousy. Donizetti responded with some of his best dramatic arias and duets, including many vivid choral contributions and a thrilling conclusion to each act. A good production can set "Roberto Devereux" as the rightful jewel in the crown of the composer's masterful trilogy on the Tudor queens.

The greatest test for the success of any bel canto opera comes with the solo vocalists, and this is where "Roberto Devereux" 2018 scores highest. Second-year Adler Fellow baritone Andrew Manea was a late replacement for an injured Artur Rucinski as the Duke of Nottingham, and he portrayed his slow boil to revenge believably. Tenor Amitai Pati (second-year Adler Fellow) and bass-baritone Christian Pursell (first-year Adler Fellow) also proved the worth of their residency with strong performances as Lord Cecil and Sir Walter Raleigh.

Acclaimed mezzo-soprano Jamie Barton brought memories of a young Marilyn Horne to mind in her touchingly sympathetic role debut as Sara. Her rich tone is pure even in moments of dramatic stress, and she matches beautifully with her co-stars.

Tenor Russell Thomas, also making his role debut as the title character, is a good actor with an impressively powerful voice. His important solo in his imprisonment scene was especially fine, and, like Jamie Barton, he works convincingly within the ensemble.

"Reigning diva" soprano Sondra Radvanovsky couldn't be better suited to reign as Elisabetta. Her stunning performance runs the gamut from passionate woman in love to frail and beleaguered old lady, and she dominates the marathon with a combination of strength and moments of surprising delicacy. Her towering portrayal is unforgettable.

The show may be history "Masterpiece Theatre" style, but that's no knock, because as opera it is masterpiece bel canto style.