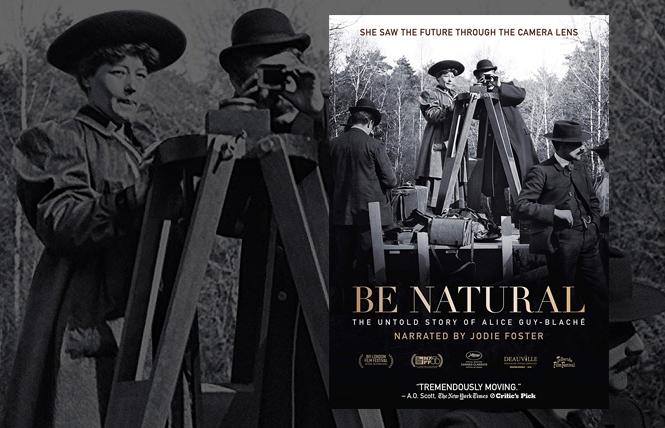 "There is no merit in being first," is an incredible understatement by Alice Guy-Blache, the subject of the new comprehensive Blu-ray documentary "Be Natural: The Untold Story of Alice Guy-Blache, the First Female Filmmaker," just released by Kino Lorber. She was cinema's first female director, screenwriter, producer, and studio chief-owner, whose innovative and landmark career lasted 20 years in two countries, writing, producing and/or directing 1,000 silent films. Yet only in the last 15 years has she been rediscovered after being ignored and virtually rewritten out of film history. While "Be Natural" is problematic in its presentation, it makes Guy-Blache's inspiring and appalling story more widespread. It finds and restores several of her lost movies, and discovers rare footage, recordings, and interviews of Guy-Blache herself, who died at age 94 in 1968. Finally Guy-Blache is receiving the approbation she deserves as a trailblazer in narrative filmmaking.

Born in 1873, she became a stenographer at age 22 for Leon Gaumont, head of the company which manufactured movie cameras. Through him, she was invited in 1895 to witness the first film invented by the Lumieres. Intrigued, she saw the possibilities of film to tell fictional stories instead of just documenting daily life. In 1896, she made the first narrative movie, "The Cabbage Fairy," and became Gaumont's head of production, directing comedies, melodramas, westerns, and histories. In her films, she not only established the "poetic grammar of movies," but invented the close-up, hand-tinted color, and synchronized sound, decades before Hollywood. Her subject matter included alcoholism, child/spousal abuse, immigration, anti-Semitism, feminism, and gender-swapping. Her film, "A Fool and His Money," was the first ever to feature an all African-American cast, despite racial stereotypes. She married Herbert Blache, a Gaumont employee, in 1907. They moved to the U.S., where in 1910 she set up her own company, Solax, rivaling the other established studios, in Fort Lee, NJ, for a while the Hollywood of the East. She hung a large sign proclaiming "Be Natural" as a reminder to her actors. She influenced both Eisenstein and Hitchcock. Divorcing her philandering husband in 1920, she moved back to France, but the Wild West freewheeling atmosphere of the early years was gone, and like Hollywood, the industry became male-dominated and corporate profit-oriented. She never made another film.

"Be Natural" centers as much on writer-editor-producer Pamela Green's investigative search, tracking down material about Guy-Blache, as it does on her life and legacy. We're introduced to her descendants, often clueless about their ancestor's influence or the importance of the dusty boxes of photos and films in their possession. It feels as though two films have been crammed into one, contributing to its frantic pace. Unfortunately, the movie gets off to a rocky start when Green asks a Who's Who of actors and directors (Jon Chu, Ben Kingsley, Geena Davis, Martin Scorsese, Evan Rachel Wood, Patty Jenkins, Kathleen Turner, Peter Bogdanovich, Ava DuVernay) whether they've heard of Guy-Blache. Virtually all of them say no. It's redundant and takes valuable time away from Guy-Blache's story, as does Green's attempt to track someone who can digitize an antiquated videotape of an interview with her. Apparently Green began her career in animation, so there are cutesy graphics, maps, even voicemails illustrating her search for clues about Guy-Blache. There's too much information. One appreciates her efforts, but must every cumbersome detail about her hunt be documented?

Despite this caveat, "Be Natural" is an impressive achievement in silent-film history in rightfully restoring Guy-Blache as one of the true pioneers of cinema. Her contributions were left out of the records. Till the end of her long, financially insecure life, Guy-Blache wrote letters to authors and scholars attempting to set the record straight concerning which films she directed, and to locate in vain lost prints of her movies.

Because of their naturalistic acting and sophisticated subject matter, her movies don't seem dated. Kino Lorber includes a volume on Guy-Blache in two excellent DVD collections: "Gaumont Treasures (1897-1913)" and "Pioneers: First Women Filmmakers." "Be Natural" goes a long way in restoring Guy-Blache's historical reputation, arguing she was one of the first auteurs of cinema. This frustrating and exhilarating documentary is mandatory viewing for any cinephile.