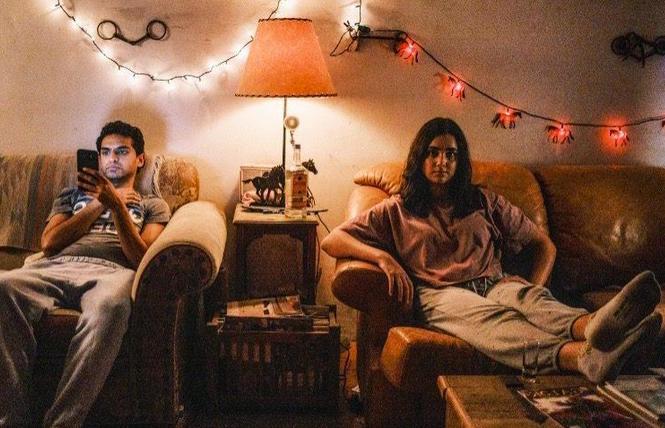 Way back when, in the early 2000s, the Duplass brothers, Mark and Jay, were at the forefront of what turned out to be a short-lived, but nevertheless influential film sub-genre known as mumblecore.

The less said about that the better, because they have thankfully moved on to far superior things, including producing the acclaimed 2021 movie "Language Lessons" (which Mark co-stars in and co-wrote) as well as the newly released "7 Days" (Cinedigm). Both films are excellent, and due to their intimate natures, can be traced back to mumblecore.

Co-written by gay life- and creative-partners Roshan Sethi and Karan Soni, "7 Days" is directed by Sethi and stars Soni. The film is bracketed by an effective device in which arranged-married couples are interviewed about their experiences. This both sets the tone and nicely ties up things at the end.

Opening in March 2020 during the very early days of the COVID-19 pandemic, Ravi (out actor Soni) and Rita (Geraldine Viswanathan) meet, masked and gloved, for a picnic date at a reservoir that turns out to have all but dried up. Easily upset researcher Ravi is greatly distressed by this, while the more laid-back, unemployed Rita is nonplussed.

Both in their 20s, Ravi and Rita are being urged by their mothers to meet an Indian mate and get married, and each is taking a different approach to the pressure. Ravi goes through a series of Zoom interviews with potential spouses, while Rita is carrying on an affair with a married man she calls Daddy (voice provided by Mark Duplass).

During the picnic, both of their phones blow up with multiple COVID warnings, including orders to shelter-in-place. Here's the conflict: Ravi is without a car (it's in the shop for repairs) and there are no available hotel rooms. Rita, who presents herself as a "traditional" girl, offers Ravi her couch. He hesitantly accepts, and then each of them must explain the situation to their respective mothers.

Rita is anything but traditional and her house, with its unusual American West décor, is a pigsty. Regardless, the pair is about the embark on "the longest first date ever."

Some more serious moments occur as they begin to open up to each other about their families (Ravi's parents are divorced) and their futures (Rita is adamant about not getting married). They even dance!

Hungover Ravi forgives Rita all the while freaking out about the rising COVID numbers. He cleans and cooks, which calms him. He also discovers that Rita is a painter. But to get him not to look at the canvases, she tells him they are of "aggressive vaginal imagery."

Being in close quarters begins to have a strange effect on them. Ravi dreams about Rita. Rita calls "Daddy" at two a.m., even though she knows he's isolating with his wife. Rita blows up at Ravi and says cruel things to him before leaving the house unmasked.

The next morning, Ravi is dressed and ready to leave. Rita apologizes to him and lets out a cough causing him to freak out.

From this point on, "7 Days" takes its most serious turn as Rita develops COVID symptoms and is eventually hospitalized with the virus.

No spoilers here! Suffice to say that the honest and authentic writing and acting continue all the way until the closing credits. As with "Language Lessons," "7 Days" is a nearly flawless two-character movie that elevates the genre to new and exciting heights. Rating: A-