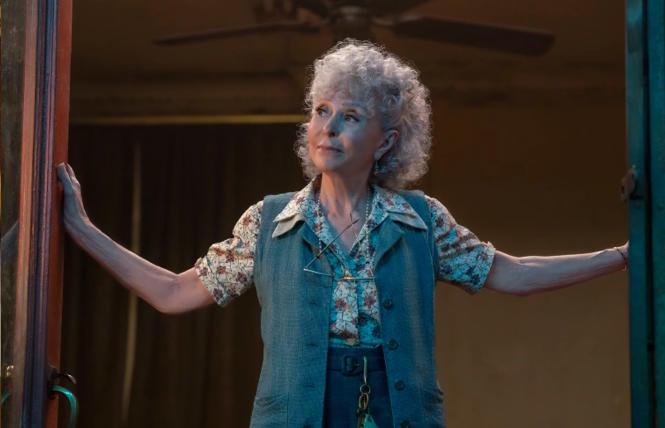 Rita Moreno as Valentina in the 2021 'West Side Story'

A packed, masked and vaccinated audience braved the rain and filled the Castro Theater on Sunday December 12 for a free screening of Steven Spielberg's reimagining of the classic musical West Side Story. The crowd was in an upbeat mood, with many saying that they were excited about seeing the film, which stars Ansel Elgort and Rachel Zegler as the star-crossed, ill-fated lovers Tony and Maria.

The afternoon began with famed Castro organist David Hegarty playing songs from the film's iconic score. An appreciative audience applauded at the end of each number.

The event's biggest draw was not the film itself, but the presence of legendary actress Rita Moreno, who 60 years ago won an Oscar for her portrayal of Anita in the first film version of the musical. It was a special weekend for Bay Area resident Moreno, who celebrated her 90th birthday the day before the screening.

The audience was clearly delighted by the screen icon's presence, singing a joyous "Happy Birthday" to Moreno. The actress is also in the 2021 film, playing the newly created character of Valentina, the owner of the local candy store. In addition, Moreno serves as one of the film's executive producers.

"Oh my God, you actually showed up," Moreno said as she addressed the crowd prior to the screening. "I saw that rain and I thought 'Oh, shit,' and you came."
The audience laughed.

"This is probably the most thrilling time of my life," Moreno said. "That I have reached this kind of apex, and we have for you the most incredible movie you will have seen in many, many years. It's easy to say this because now all the critiques are out. But it is a fantastic, thrilling movie and as joyous as you've heard it is." 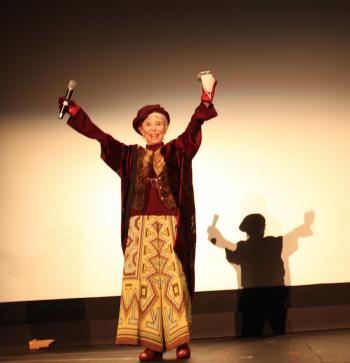 Rita Moreno on stage at the Dec. 12 SF Film screening of the new 'West Side Story' film.  (Source:Pamela Gentile)

Moreno received rousing applause, followed by a hushed silence as the film began.

The end of the film was met with much cheering, especially when Moreno's name appeared on the screen. She received a standing ovation when she stepped back onto the stage, where she was interviewed by Keith Zwolfer, Director of Education for SF Film.

"I think this is my sixth time," Moreno said of how often she's seen the new West Side Story. "I could sit here and sigh for a half hour. I think I get more emotional every time I see it. Aren't they wonderful?"

"I want to thank Steven Spielberg and [screenwriter] Tony Kushner for making all these amazing decisions in the film," Zwolfer said. "But the best decision was to bring you back."

Moreno shared that it was Kushner's husband Mark Harris who came up with the idea of having her play Doc's widow, Doc being the candy store owner in the 1961 film.

"I still don't know what an executive producer does," Moreno quipped. "I'm an actress! One of the funniest things that ever happened on the original movie, when the Jets were in a car, there were about four of them, and apparently, they were speeding. A cop stopped them and he asked each one what they did and one of them said 'I'm a dancer, I'm doing this movie.' And that's how I feel, I'm a producer. He [Spielberg] knew that I could be very helpful to him on all things Hispanic, not just Puerto Rican, but Hispanic. And of course, it was Tony who pushed me on him."

Valentina's Day
Moreno recalled that when Spielberg first contacted her, she thought she was being offered a small role.

"I don't do cameos," she said. But when she read the script she saw that she was being offered a fully fleshed-out character. Moreno even has a number in the new film.

The plaintive song "Somewhere," originally sung by Tony and Maria, is given to Valentina, and Moreno's rendition brought the house down. She said that it was one of her favorite songs.

"I cried when I saw the movie for the first time," Moreno said. "At 20th Century Fox, they have a great theater. I cried, and my daughter was sitting next to me, and she's here tonight. And I started to cry at the 'Dance at the Gym,' which is very joyous and filled with energy. I couldn't understand why I was crying. And I realized, it was because Steven got it right."

It may have surprised a few audience members to hear that Moreno almost didn't do the 1961 film because of the lyrics to the show-stopping song "America." The original opening lyrics to the song were "Puerto Rico, you ugly island, land of tropical diseases..." 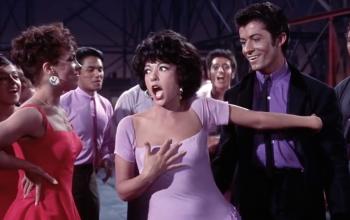 "I can't do this to my people," she said, as the audience applauded. "And then there was the nightmare of having to tell my agent that I was going to have to bow out on principle. And you know agents, 'Principle? What the fuck are you talking about!' And I was scared to death he would talk me into doing it, because he said, 'You committed.' I was terrified, and literally the day before I was going to call my agent, I got a new script —meaning rewrites— and there it was 'Puerto Rico, my heart's devotion,' he [lyricist Stephen Sondheim] changed it, it had nothing to do with me, but obviously someone said to him, 'That's kinda harsh, would you consider changing the words?' and he did."

Zwolfer noted that Moreno still had all her dance moves when she comes out on stage.

"Was there ever talk of having you dance?" he asked.

Moreno noted that her favorite number from the new film was "America." She reminded the audience that in the original stage show, this song was sung by the female characters only. It was when they decided to do the first film that original choreographer Jerome Robbins decided to add the male characters to the number, an idea which was retained for the new film.

"Which is the best thing that ever happened to 'America,'" Moreno said. "It was delicious, charming and funny."

The Q & A lasted for about twenty minutes. It was followed by twenty minutes of questions from the audience. At Zwolfer's suggestion, it was younger members of the audience who stepped up to the microphone. One young girl named Belle asked Moreno what her advice was to anyone who wanted to be an actress. Moreno's advice: "Finish your education."

See West Side Story at local cinemas. Learn more about the film and other productions at https://www.westsidestory.com/

'Being the Ricardos' - Aaron loves Lucy

'Flee,' a tale of escape, coming out and finding love
Sign up!